I hope the tryptophan has worn off and your ready to make the final push toward the New Year. We here at LynchyRightNow.Com, can barely contain ourselves. Since the return of Tony Romo the Cowboys are winners of three straight, the Boston College Eagles play for a shot at the ACC title on Saturday (we'll be in attendance), and the Celtics are 13-2. As the children say, it doesn't get much better than this.

Okay, so I caved in. You can call me a sell out, in fact I would prefer you call me that. The next several sentences will be dedicated to Canada's pastime, Hockey. I'm a Massachusetts native, in this commonwealth 24/7/365, all my life. In the 2000's, George Jetson's world hasn't come true. No flying cars, no meals in pill form, and unfortunately no Playboy spread of Judy, instead every New Englander has been awarded with the collective greatest winning streak of major professional sports teams any town has ever seen. Three Super Bowls, two World Series, and one NBA Finals, you could say it has been pretty good to us. The only thing were missing? Lord Stanley's Cup.

Well, after all those curse busting, banner raising, championship parades, it's time to bring the worlds most coveted trophy back to The Bean. (Part of me wants to argue I'd rather have a Heisman Trophy winner, but were in puck mode.) The black & gold Boston Bruins are currently 14-3 with 4 overtime losses. Their 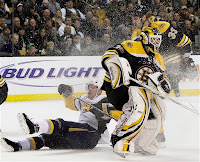 record is good enough for first place in the Northeast division, a division that includes three Canadian franchises and Buffalo, I like it. They've won four of five this month including two against division rivals, Toronto and Buffalo. Veteran center, Marc Savard, is tied for second in the league in total points (27), with 8 goals and 19 assists. The pride of Flint, Michigan, goalie Tim Thomas, has the leagues second best goals against average in 14 games. So I'm doing my part, the Bruins have the leagues 21st best attendance average (15,859) in one of the best sports markets in the country. I'm putting the word out there and I'm even slapping down some coin, I want the Bruins to make a deep run in the playoffs, and raise a black & gold banner to the rafters. Sh*t, this is title town baby and the B's are back, KEEP IT REAL!

The NBA's greatest talent, Lebron James, will become a free agent the summer of 2010. The whole world will in fact witness the most fantastic bidding war for a single athlete since Ronaldinho to AC Milan. Wether he ends up in the Big Apple or not, he won't be in Cleveland. You know who feels bad for the state of Ohio? Not this guy. Call it eminent domain if you will, taking land for the good of the city. Lebron in New York is good for everyone but Cleveland, in some ways it is even good for

Cleveland. Like KG in Boston or Kobe in L.A., Lebron in that city, resurrects some things, primarily basketball in The Mecca. The NBA is on it's way back from the dead. During the post-Jordan era, poor marketing, the San Antonio Spurs, and the Shaq v. Kobe quarrel painted a bad portrait of the league. Today, with the dominance of a young Laker team led by their veteran leader Kobe Bryant, a resurgence of basketball in Boston, and Chris Paul's arrival in the South, the NBA has but one piece of the puzzle remaining: Improve New York Hoops. Throughout the next 10 years, if he hasn't already, James will become the face of basketball globally. That face needs to be playing in front of a fan base like New York's and in an arena like Madison Square. If Cleveland wants to reap the benefits of the NBA's popularity, they'll quiet down. KEEP IT REAL, Lebron belongs in New York.

one against Illinois, one against Miami, and one against Kentucky. Wait . . I should clarify something. They Beat Eastern Michigan, Central Michigan, and Western Michigan. They didn't beat Illinois, they beat Northern Illinois. As for Miami, that would be Miami of Ohio not The U and their win against Kentucky was in fact against Western Kentucky. So, were curious why Ball State isn't getting more love than their #15 ranking? That's why. It may be a tough task to remain undefeated throughout the rigors of college football, but if your going to play in Division 1A, schedule some Division 1A opponents, would you? You want to be the next Boise State and you want that kind of respect, go into Oregon and beat them in their place. That is the type of win that impresses pollsters. KEEP IT REAL, Ball State this is your formal invitation to the Purina One Dog Food Bowl. 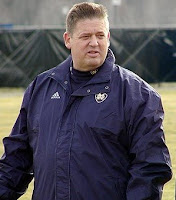 However, this Weis wagon will be driven by me. He and his team lost to SYRACUSE, the same Syracuse football team that ranks 103rd in total defense in the country. They've watered down their schedule for 2008, and could only add 3 more wins than they had in 2007. This supposed offensive genius, is the head coach of the NCAA's 57th ranked offense. I'm just going to put it out there, if the Patriots admitted to taping the defensive signals, wouldn't Weis have benefited the most? If you know what they are going to do, it's pretty easy to look like a genius when you are calling the plays. Two years removed from one of Notre Dame's best quarterbacks, Brady Quinn, and Weis' offenses look very, very, very average. I've said it before, if I'm a five-star high school recruit, I'm playing in So Cal, Gainesville, or Austin. His offense looks big and slow, if I wanted to watch Big 10 football, I'd turn on Ohio State, not Notre Dame. Weis is overpaid, over hyped, and has underperformed. Weis out at ND.

It's one thing to have America's Team play every Thanksgiving Thursday, it's quite another to have the Detroit Lions play on that same day. I'm all for

tradition, but having to watch the anything from the state of Michigan on Thanksgiving is torturous. The Lions have drafted poorly, played poorly, and been managed directly into the NFL abyss. At some point enough is enough, the world should have had to suffer through another Lions debacle on the day we remember to give thanks. To start off, the winless Lions were welcoming a 10-1 Titans team into their place. By the time America tuned in, midway through the second, the Lions were already down 28-3, and we hadn't even sniffed that turkey in the oven. Final score, 47-10. About 50 fans were remaining in the facility, 25 with bags on their heads, 15 holding "Bailout Detroit" signs, and the last ten stuck in the line for the bathroom. This is the Thanksgiving tradition we want to see? The Macy's parade, the Dallas Cowboys, and feeling so full that you need to unbuckle are the only traditions we need. Can the Lions, and can the city of Detroit, KEEP IT REAL!

Lastly, of course the Philadelphia Eagles beat the Arizona Cardinals late Thursday night. Take whatever you know or think you know about the NFL, and throw it out the window. The Cardinals were prepared to take that next step, the step that both the Giants & Jets took last weekend, seriously be considered as a contender. The Eagles had been a part of the first tie game in the NFL since 2002, they benched their veteran quarterback in a three point

game the week prior, just before getting polished off by 31 points, and they'd also suffered through a week of media attention that had the head coach getting fired and their quarterback in his last season with the franchise. So who wins? The Eagles. The Cardinals and their MVP candidate, Kurt Warner, are sitting on the division lead and with a win they would clinch, yet what happens? They get straight up blown out. McNabb throws for four touchdowns, gives the Eagles fans something to cheer about and probably delays the inevitable for another couple weeks. The Eagles are bad, the Cardinals are terrible outside of Arizona, and I'm tired of the McNabb/Reid show. Congrats Kurt Warner, your in the NFL's second worst division and can't even finish it off the right way, IN PHILLY! Keep It Real!

That's all for this week folks, and always remember Keep It Real! Happy Thanksgiving!
Posted by Lynchy at Friday, November 28, 2008