DP is The MVP

Hall of Famer, Cal Ripken Jr. and Phillies slugger, Ryan Howard, have some company. Before Tuesday, only The Ironman and Howard had followed up their rookie of the year honors with an MVP trophy the very next season. Today, Red Sox second baseman, Dustin Pedroia, became the third player in baseball history to achieve these honors.

I could tip my cap to Pedroia for playing in 157 games of a 162 game season, the most of any Red Sox in 2008. I could wax poetic about how very few second basemen in baseball history had the type of season Pedroia did. I could even go through every at bat Pedroia had while he was hitting clean up in the week following the departure of Manny Ramirez, possibly the only player under 5-9 to ever hit in the four spot. But you already know that. In my mind there are three(3) specific reasons, why in fact Dustin Pedroia is the newest Red Sox to win the American Leagues Most Valuable Player:

For years I've seen impact players like Anaheim Angel, Chone Figgins and current Arizona Diamondback, David Eckstein go overlooked. Sure, we give them their due when they drive in a run or steal a bag but these guys never put up the power numbers to award them an MVP trophy. We marvel at how small in stature they

are while their play is much larger. In 2008, Dustin Pedroia became one of those guys who put the numbers up to capture that trophy. Pedroia weighs in at close to 180 pounds, and at times his swing looks as if it will pull his smaller frame right out of his cleats, but when he smashes homers (17) over Fenway Park's legendary Green Monster, no athlete is bigger. When Pedroia steals bases (20) to put him in position to score on a soft single to the outfield, can you argue his value? When Pedroia is not only willing but relishes batting anywhere from the top spot in the order to the bottom, can you argue his value? Pedroia is the type of player who can do anything, hit a homer in the clutch, steal a base, lay down a bunt, and his defense . . . I think the 2008 Gold Glove at second base speaks for itself. Like Figgins and Eckstein, Pedroia does the little things and finally a guy who does more than club dingers gets recognized.

After Pedroia and newcomer Jason Bay, name the Boston Red Sox player who is guaranteed he'll be at his position in 2009? Varitek may or may not be back with the Red Sox, Coco has already been sent packing, Mike Lowells career in Boston depends on the decisions of Mark Texiera which in turn will determine the position of Kevin Youkilis, (also an MVP candidate) Lowrie and Ellsbury need to start hitting to ensure their positions long term and J.D. Drew will most likely play no more than 82-100 games. Bay is going to be in a contract year, and Pedroia is the most dominant

second baseman in the majors. Do you still want to talk value? As far as most valuable, the guy who hit a season average of .326 would be a good pick. During the major leagues most important months, June, July, and August, Pedroia hit an amazing .360 including August where the second baseman finished the month batting .374, any questions? In June the Red Sox play serious time with the absence of David Ortiz from the lineup, in July they went through another miserable stretch with Manny Ramirez, and in August they had new player Jason Bay getting acclimated to the lineup, Mike Lowell on the DL, and Jason Varitek in the midst of a woeful season long slump. It was Pedroia who carried the lineup, either getting on base or slapping in runs, Pedroia was THE solid, reliable bat, in the Red Sox order. No hitter on any team had more influence on the day-to-day success of their lineup as Pedroia did throughout the heart of the season.

Go ahead, call me a homer and say I have a short memory, but I can't recall a second baseman who is more sure handed than Dustin Pedroia. Among AL second baseman who are noteworthy to me, Pedroia is tops. His six errors in 157 games played are better than that of one time MVP candidate and Rangers second baseman Ian Kinsler, who in 26 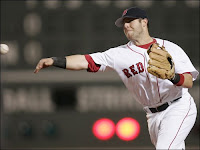 fewer games had 3x as many errors (18). Better than AL Rookie of the Year candidate and fellow second baseman, Alexei Ramirez who in 26 fewer games had nearly twice as many as errors as Pedroia. It's time we recognize these type of stats when we talk MVP seasons. Home runs and RBI's put runs on the board, but dives in the hole take runs right off that same board. His fielding is more than recognizable. Pedroia's raw intelligence as a baseball player coupled with the fact that his bat is bigger than you think and his glove is a huge asset to the Red Sox made him more valuable than nearly any player in baseball this season.

In just two complete seasons in the major leagues, Dustin Pedroia can now open a trophy case that includes (1) 2007 Rookie of The Year, (1) 2008 Gold Glove, (1) 2007World Series Ring, and (1) 2008 American League Most Valuable Player. Ladies and Gentlemen, it doesn't get much better than that. Next stop: Cooperstown?!?
Posted by Lynchy at Tuesday, November 18, 2008