Chiefs + 5.5 @ Falcons Rookie quarterback Matt Ryan got a taste of what real NFL defense is like against Tampa in week 2 (sacked 4 times, two interceptions). Luckily for him, the Chiefs defense, which he'll see in week 3, makes Tampa look like the '85 Bears. Giving up 300+ rushing yards to Oakland in week 2 doesn't bode well for the Chiefs. Falcons backs Turner & Norwood have combined for close to 400 yards in two games. Falcons -5.5

Saints +5.5 @ Broncos Jay Cutler has been MVP like (650 yards passing, 6 touchdowns) The Broncos are looking like a team built to make a deep run and I'd argue there is no homefield advantage in all of sports like playing in the thin air of Denver, Colorado. The Saints defense has given up 540+ yards through the air this season. Broncos in a rout. Broncos -5.5

Steelers +3.5 @ Eagles Wrong defense for Big Ben to have a separated shoulder against. Philly gets after it and will force Pittsburgh to run the ball early and often. The Eagles have allowed just 104 yards on the ground in two games, against Stephen Jackson and Marion Barber! Willie Parker and Co. have their work cut out for them on the road. Eagles by a field goal. Steelers +3.5

Panthers +3.5 @ Vikings The Tarvaris Jackson era is over before it could even start . . . Wait, the Vikings are 0-2 and have absolutely no ability to throw the ball. I think Gus Frerotte is a great option, unless you had Tom Brady on one leg, hell maybe even Tom Brady on one of my legs! Carolina is the surprising team of 2008. Delhomme has hit the way back clock to 2004, looking fantastic after having Tommy John surgery. Rookie running back Jonathan Stewart is averaging 5.5 yards a carry and the Panthers are 2-0. They've looked great even without all-pro receiver Steve Smith, who is expected back this week. Panthers +3.5

Cowboys -3 @ Packers There has to be a layover from that Monday Night game right? Aaron Rodgers has looked great thus far going 2-0 for the Packers, a late scare against Detroit in week 2 might have been just what the Pack needed. I didn't like the way Romo played after the interception and subsequent fumble in the endzone against the Eagles. This is going to be a great game on Sunday night and despite how talented Dallas looks, I can see a hangover, especially playing at Lambeau. Packers +3

Jets +9 @ Chargers After losing the way they did in Denver last week the Bolts could do 1 of 2 things. Mail it in or use it as a rallying cry ( i hate that term, but it fits ) The Jets offense looks lost, and even though he is Brett Favre, it'll take him a couple more weeks to get a handle on it. The San Diego defensive was terrible in Denver last week and without Shawn Merriman, I can't say it'll get much better. Favre is dying to air it out and start throwing the ball to get into a rhythm and the Chargers' Tomlinson looks like he's getting old (less than four yards a carry, sat out all week with a toe injury) Charges will win, not by 9. Jets +9

About those New England Patriots . . . be afraid, be kind of afraid. The Jets aren't the NFL's best team by a longshot, maybe even a bit over hyped 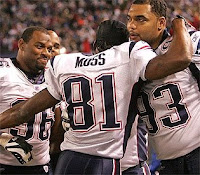 (very over hyped) but the Patriots had a game plan and executed it to perfection last weekend. Even without Brady, this team is pretty stacked. Richard Seymour, Rodney Harrison, Deltha O'Neal, Adalius Thomas, the rookie Jerod Mayo, and Vince Wilfork, lead a vaunted Patriots defense of which Brady never played on. Veterans Wes Welker, Randy Moss, Jabar Gaffney, LaMont Jordan, Matt Light, and Kevin Faulk are all capable of making plays to help the young quarterback Matt Cassel. This team probably won't win the AFC title, but you can sure bet they'll factor into the playoffs and if things keep going the way they've gone so far for the San Diego Chargers, ask which team is in more trouble? 10-6, KEEP IT REAL!

By now, you all know about the Broncos/Chargers game in week 2. If you don't, veteran NFL referee, Ed Hochuli, blew a whistle early right after Jay Cutler had fumbled on the game winning drive. The blown whistle stops the play, and while the Chargers had 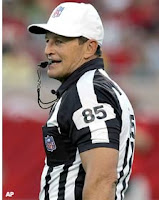 recovered the fumble after the whistle, the play is blown dead. In short, he dropped the ball, lame pun, totally intended. Hochuli is one of the most respected referees in professional sports, he apologized for his mistake, took ownership, and feels more than awful. Everything Hochuli could have done after the mistake, he did 100% correct. But for the past few days it has been widely reported that Hochuli has been receiving hate mail from disgruntled fans of the Chargers, Hochuli has taken this so hard he's been RESPONING TO THOSE FANS WITH APOLOGY LETTERS! Here's my response to those who wrote e-mails to Hochuli:

Hochuli may have made a big mistake on Sunday afternoon, but it isn't close to the mistake your mother made when she decided to birth you. For starters, where do you get Ed Hochuli's e-mail address? I mean I'm not sure how that is public knowledge and even if it was, who looks it up? How boring is your life that you have to take quality time to look up an NFL referee's e-mail and write him some hate mail? I mean is there really nothing else that is going on in this world that isn't more important than that? I hope you are the same toothless goon who writes hate mail to the president as well, he's screwed up WAY more than a football game in September. Your a complete loser and should be sent to Siberia in my humble opinion of you. Hochuli owned up to his mistake, something you'll surely never do, AND he didn't even have to! HE OWES NOTHING TO THE FANS, ZERO! Next to Norv Turner, the only other person(s) he should have apologize to are the players and his boss, Roger Godell. Have a good life, and if you write any e-mail to me, I will do to them what Mr. Hochuli should have done: DELETE THEM YOU MORONS! KEEP IT REAL!

NSLYNCH@GMAIL.COM, bring on the hate mail!

O.J. will beat the kidnapping trial, how do you bet against him?

USC v. the SEC Champ, just play it and give the trophy away now!
Posted by Lynchy at Friday, September 19, 2008