Keep It Real Friday! You NEED This

A little off the normal path with this segment, but were more than just sports here people, were making history! Sorry, with all these speeches going on, I'm all messed up: TO THE TOPICS . . .

Don't prep that Yankee uniform for C.C. just yet. I watched Wilbon and Kornheiser

chat with C.C. on PTI today, about the Cubs, Brewers, and all things Milwaukee. Not only did I see a guy who is dominating in the National League, I saw a guy who actually prefers the "second" league. Yes, the Brewers won't be dumping $100 Million in C.C.'s pocket, but for a guy from the West Coast whose spent his entire career in Ohio and Wisconsin, is the city that never sleeps the place he wants to be? Playing in the American League East, against offenses like Boston, Toronto, and Tampa Bay, doesn't exactly help your career stats. After pitching to Cincy, Pittsburgh, and Houston your going to jump to the A.L. East? C.C. it may not be as lucrative, but any of the five California teams would be a better fit. (Words from a Sox fan watching you put 1.43 era up on the National League)

What the F*CK Brett?!?!?! Okay, so after months of me trashing him while he was retired and upon his return, I finally admitted that MAYBE he can lead this Jets team somewhere positive. I even think that because the media loves him so much, of course he'll win the MVP, if the Jets make the playoffs and win 10 games (including one against the Pats) Yet after hearing Favre downplay being named captain, admitting he is afraid of the CHANCE he won't play well, and forcing at least 20 Jets fans to hit the bar harder than they ever have, I'm off the Favre ship. I hope Kyle Clemons is playing quarterback by November and you all regret buying those Jets Favre jerseys like my friend Dan regrets getting that Celtics Chauncey Billups jersey in 1997. Like the Packers asked you seven months ago, are you in Brett or are you out? KEEP IT REAL!

If you are real quiet, you can hear the screams coming from Wrigley Field in Chicago all the way back in Massachusetts. Zambrano & Harden are skipping starts? Similar

to what I think of the Giants without Strahan and Umenyiora, the Cubs won't be around long into October if Zambrano and Harden aren't in there. Does anyone really want to see the Cubbies finally win one? In the 100th year without one, I don't mind if we go another 100. Could you tell me the bigger story, the Cubs winning one or the Rays winning one? I'd make an arguement that the Cubs aren't as much of a story as the Rays would be, I'd even be inclined to say that the Rays should be favored given how they've played in 2008. Tied with the most wins in the regular season, managed by Sweet Lou, and entirely to long without a championship, all leads to one thing. A FIRST ROUND OUT to the Diamondbacks. Promptly sending hoards of Cubs fans to the ward. (Coming from a Sox fan, you know the two times in 4 years Sox?) Come on, Keep it Real!

A-Fraud was the first to have a homerun challenged, SHOCKER! First, how were the not lines on who would be the first guy to have a homer challenged. Would anyone bet against it being A-Rod? Am I a fan of instant replay? Yes. However, it shouldn't 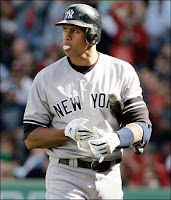 be limited to just homers, if were going to straighten out a non-homer call, let's straighten out the thrown out at second or even thrown out at home for that matter. I'm more concerned about the game winning run being decided by replay of a guy who slid into home and MAY have been safe rather than a homer in the 4th inning that was over the foul pole just inches to the right. Why decide homers indefinitely yet allow runners to be called safe out or vice verse? Make more time for replay and less time for catchers to the mound, or pitchers warming up on the mound after just spending ten minutes warming up in the pen. I've never understood why major league players need to toss the ball around the outfield while waiting for the pitcher to finish warm ups, pointless! Keep it Real! Make the calls, challenge the calls, and fall in suit with the rest of pro sports.

I'm going to try and be sensitive with this one. Professional athletes are targets when they go out at night, it doesn't mean you shouldn't, it just means things are going to happen. Given recent events of the shooting surrounding Jacksonville Jaguars offensive tackle, Richard Collier, I think it's time we put this into perspective. Body guards and drivers need to be hired, teams and or the players need to hire them. You can't tell grown men to stay in their houses and be boy scouts, but you can get protection for them. Million dollar television contracts, marketing deals, some of this money needs to be out there working for the players, to protect them from others and even from themselves. I'm leaving "Keeping it Real" out of the equation, you need to Keep It Smart. I hope this kid survives, thoughts and prayers.
Posted by Lynchy at Friday, September 05, 2008