Last summer as Jon Lester made his comeback to the big leagues after defeating cancer, I wrote about how incredibly inspirational Lester has been to the fans who were watching him. Tonight after Jon Lester threw a no-hitter in just his 37th career start, I thought rather than talk about his bid, I would repost what I posted back then. Enjoy:

With all the Michael Vick's and Tim Donaghy's of the world, professional sports is looking worse by the day. But last night with the bases loaded in the 5th inning, hanging on to a 5-2 lead with Indians phenom Grady Sizemore at the plate, I saw one 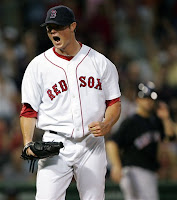 of the greatest professional sports moments of my life: cancer survivor and Red Sox left hander, Jon Lester, in his first game back with the big club threw a strike past Sizemore to end the inning. His mother, who could barely watch, jumped with excitement as her son pumped his fist on the mound. The camera immediately flashed to his parents to see the elation in their faces. It wasn't the athletes gorgeous actress wife, the Hollywood actor who got front row tickets just for showing up, or the director who lives and dies with every move the team he worships makes. It was the parents who just watched their son go through the horrors of cancer treatment and months later was on a big league mound striking out the best ball players in the world... that's who the cameras flashed to. That's who we should always see on the other end of the lens; and from time to time, we forget that.

To me, watching Jon Lester's parents cheer for him was more exciting than the actual game he was participating in. They were on the edge of their seats the whole night. They were as nervous for him as he was for himself, and would you expect anything less? I was dying for SportsCenter to play an elongated piece about how everything happened for this young man, but instead the question of the night was who has a tougher job: Bud Selig, David Stern, or Roger Godell? A cancer survivor stands on the mound in Cleveland ready to take the stage he took a year ago when he was diagnosed, and we are talking about dog fighting, point shaving, and steroids? Maybe cancer holds a place near and dear to my heart because of how it affects the people around me, but name me the person who says this shouldn't be a bigger story than what sick sh*t Michael Vick does in the off season, and I'll debate him till I'm blue in the face.

I don't want to continue to rant so I won't, but I want to say congratulations to the Lester family, and especially Jon. Anyone who has ever been touched by cancer knows that to see a man do what he has done gives you hope and is an inspiration to all of us. Thanks Jon.
Posted by Lynchy at Tuesday, July 24, 2007