Cops, the first great reality (ok, so semi-reality) television show ever broadcasted on American television. They've brought the show all over America just to show us what kind of real low-lifes there are in this country, must be refreshing to know. But I just have one request for the show, in light of recent events, the National Football League turning into BAR NONE the most law breaking group of athletes on the planet, I have decided to assist the major players at this great reality television show. Forget about bring Cops to Miami, South Central LA, the southside of Chicago, or every other nascar loving area down south, the real action should be to follow around NFL players during the offseason. So, to the producers I'm going to offer you all a few layups, players to follow that you'll definately get a really good show out of and huge ratings:

PETA'S FAVORITE: MICHAEL VICK
Why start off with anyone else? seriouslys? Just think if we had thought of this idea six years ago, we could have followed him around throughout the whole time he was wrapping jumper cables to the testicles of pitbulls and putting them on a "mating machine" lol forget the mardi gras special COPS does every year, watching a bunch of pervs hook up dogs to a treadmill fit to make them mate with each other, thats way more disturbing than anything FOX has every produced. quick FYI, let's all pretend like there weren't other major professional football players who joined him at a few of these dog fights from time to time? I'll take Vegas odds on that one, ANY DAY.
PRE-I FOUND THE LORD: RAY LEWIS
In the words of TO "Ray Lewis, double murder case, you know, and I'm the bad guy?" this would have been a classic episode, do you see this guy get pumped up for a game? or after he makes a huge stick? one of the most dominating linebackers of recent years, just imagine filming COPS when he is out at the club and they give him the wrong drink?

I'm in love with a stripper: PACMAN JONES
Despite the fact that your life would most likely be in danger rolling with Pacman and his crew, the episode of COPS would definately net you at least three to five felony arrests, guarenteed. Come to think of it, this would be a better replacement for the Mardi Gras themes Cops episodes 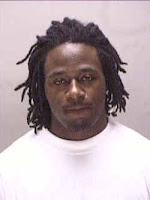 Just imagine the possibilities, he's been arrested in about three different states so you'd get multiple episodes out of this one, you'd span the countries most luxurious strip clubs and make it rain at everyone of them, I mean i think the most overused phrase among strip club goers since the Pacman Vegas All-Star Incident, oh yea ALL STAR GAME OF ANOTHER SPORT, is MAKE IT RAIN. Pacman's friends were going to do an intervention which we could do a COPS episodes on, they stopped the intervention after finding out that they were the ones who he'd need to swear off in his life, resulting in some sort of celebration at the local gentletman's club, three gun shots fired, and one Steven Jackson like excuse as to why the weapons were fired. On a side note, HOW DID PACMAN JONES NOT END UP PLAYING FOR THE UNIVERSITY OF MIAMI? I mean generally a guy like him play for the U woudln't you think? Any odds of Tank Johnson joining his crew, he does need a new job, ask Pacman's friends, that job pays, pays for lapdances, handguns, and I'm guessing a dog fight bet here and there.
The Cincinnati Bengals: Post Season Wrap-up Celebration
And the answer is places you won't find Carson Palmer. These guys had more arrests as a team, in one season, than the entire league had over the past five seasons. The majority of these issues are "off the field" yet they are still DURING THE SEASON, Just imagine the wrap up party at the end of the season, not like they have work in the morning. Poster-Boy Chris Henry arrested not once, twice, but THREE times this offseason, from the domestic disputes of A.J. Nicholson, disorderly conduct of Quincy Wilson, AT A WEDDING, to the Mathais Askew getting TASERED for having a parking ticket, this franchise would throw one hell of a party. tell me HOW did the guy who actually raced a horse on foot not get arrested at least once? Kudos to you Chad Johnson. COPS get on it . . . .what else is there to do in Cincinnati anyway?
(This includes Chris Henry, he would under normal circumstances get his own show dedicated to the amount of times he's been arrested, but how many trips are we going to make to Ohio anyway?)
How have my lawyers not suggested a name change: Tank Johnson
After recieveing special permission to fly down to the Super Bowl from his peroll officers, you would think that you learn a lesson and MAYBE it's best to stay out of as much trouble as possible. WRONG!?! so when Cops Tank Johnson takes place, were going to require that he goes back on all his promises of leading a better more respectable life, oh wait, he already got kicked off the bears? AND got caught drunk driving at 3:00 a.m.? So what your telling me is that the man who is going to miss part of the season due to suspension, and he's already been to jail is out of work? GET GOING ON THIS SHOW NOW, he doesn't even have a team yet to play for, were giving him time off and he's got money? I smell emmy award.
Honorable Mention Episodes:
University of Miami Alumni Party
Minnesota Vikings Boat Cruise Anniversary Tour (you think they get wild in Minnesota? wait till the Dallas Cowboys w/ Michael Irvin as MC boat cruise)
Maurice Clarett out of Jail christmas Party
OJ Simpson v. John Daly driving Challenge
Posted by Lynchy at Thursday, July 19, 2007

I'd go with the John Daly's wife before Daly. That's like blaming Nicole Brown Simpson for her neck getting in the way.