Quick Disclaimer; I was off getting married / honeymooning / and in general, running myself ragged. But I'm back, and I appreciate the readers coming back with me. Oh, and Happy Birthday to my godson who turns 1-year old today! 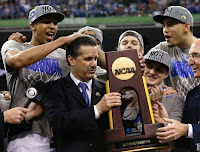 slightly different for Coach Calipari, for sure. However, the man does have a point. He recruits fantastic freshmen classes, top notch NBA-talent, and holds no punches when it comes to that. When asked about it, Coach Calipari referenced the tennis athletes, the golf athletes, and even the baseball athletes who jump to the professional ranks the moment they can, and what is so different from his hoopsters? Most likely, not-a-thing. Super-freshmen Marquis Teague, Anthony Davis, and Michael Kidd-Gilchrist most likely will chase their dreams toward The Association in late-June, while Coach Calipari has successfully earned his first National Championship, despite making us all feel dirty about it.

Ready-made defense, couple good offensive weapons along with a good offensive line, and a head coach who will stay out of the way of said offense. That's what Peyton Manning went into in Denver. A patch-work defense, a locker room in disarray, and a head coach who cannot stay out of his own way, let alone your way. Welcome to New York Tim Tebow. Doesn't seem like the way we should treat the second-son of God, does it?

Now don't go blaming John Elway for doing what he needed to do to lure a future Hall of Fame quarterback with supposed 'gas left in the tank,' that's a move you make. As for Rex Ryan and the Jets? You can only say you're going to win the Super Bowl so many times before people start to get restless. To make it worse, your Stadium-roommates win their second in the decade while you're still talking about it. Bringing in Tebow might be the best you could do to create an additional distraction, I guess get better in the red zone, and sell a sh*t-ton of jerseys, but I can't say it was a need. While I'm not a Sanchez fan, but he's definitely a better passer than Tebow. For that raw-deal that Tebow just got moving to The Big Apple, blame a 6-4 quarterback from Houston, TX that is poised to be the top pick in April's NFL draft. Yep, just made NFL prospect Andrew Luck public enemy #1 in the Tebow household, that happened.

I can't get excited for Tiger anymore. I don't care that the most exciting part of The Masters weekend is Saturday and Sunday, I just don't buy Tiger will be there anymore. With that, let us be honest about what has transpired. Believe me, I'd want nothing more than to see Tiger Woods return to his former glory and have the billions of people who loved him get wrapped up in it again, all the while feeling a little dirty about it. We've had tastes of this right? Michael Vick in Landover, MD back

in 2010 smashing the Redskins on a record-breaking night. I loved every bit of it, but if Michael Vick ever reaches a Super Bowl, ohhhh boy! It'd be like if Barry Bonds discovered a cure for cancer, I'd be excited, I'd clap a few times, but it's Barry Bonds?!?! That's where I'm at with Tiger Woods. I want him to be there on Sundays to add excitement, to get people jacked-up to watch some golf! Then again, it's Tiger Woods. You know, cheated on his wife more times than I've Tebow'ed since December! You know, publicly made a creepy apology about his infidelity, which was shockingly MORE creepy than the actual act of infidelity! Maybe we should just give this one to another old or young white guy who doesn't rock a red Nike polo on Sundays, who doesn't get me interested in golf, and who allows me to enjoy my resurrection day in other ways!

Thank you again for checking back in! I'm back! Follow me on Twitter!
Posted by Lynchy at Thursday, April 05, 2012