When I go to the grocery store I don't buy the apples with bruises on them and I don't buy bananas that have gotten brown on the outside. (Not as witty with analogies as I thought, moving on.) With that attempt at humour out of the way, here are our Five Burning NFL Draft Questions . . .

Everything that went down with St. Louis, Cleveland losing out on the Robert Griffin III sweepstakes, has left them with a huge sour taste in their mouths. After fired head coach Tony Sparano led a Dolphins team to 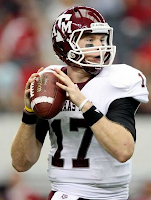 an inspired 6-3 finish and playing their way out of 'Suck For Luck', you had to know it was a sign of bad things to come. Peyton said no, Alex Smith said no, and Matt Flynn would rather play in Starbucks country than with his old coach on South Beach, talk about doomed. It's our belief however, that Holmgren has decided to give Colt McCoy another year and draft a quarterback in a later round, say Oklahoma State's Brandon Weeden. Leaving the Dolphins with the unfortunate task of having to select Texas A&M quarterback Ryan Tannehill, or as I like to call him 'the yellow skittle,' the one you're forced to take out of the bag after the rest are gone! Hey Miami, we weren't the ones who told you to pass on now perennial Pro Bowl quarterback Matt Ryan back in 2008!

4. Who is better for Tampa Bay at #5? LSU CB Morris Claiborne vs. 'Bama RB Trent Richardson

This all depends on what Cleveland does, but for argument sake we'll say Cleveland takes Tannehill or gives payback to St. Louis and goes out of character to draft highlight-film receiver Justin Blackmon away from the 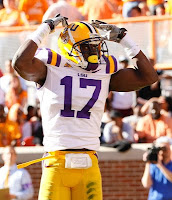 Rams. Leaving Tampa Bay in a very tough spot. The Bucs could really use Richardson in the backfield, who in our mind is one of four, can't miss, A+ talents in this draft (joining Luck, Blackmon, and Luke Kuechly), however their secondary is a mess. With LSU cornerback Morris Claiborne available and his former defensive backs coach in Baton Rouge, Ron Cooper, in the Tampa 'war room,' he's got an advocate who is probably foaming at the mouth to continue coaching the former LSU standout. I'm going to have to agree with Cooper on this one. Claiborne can be very effective at the next level and in a passing league you need that more than you need a pass-catching running back with a great set of skills, despite that Claiborne's shoe size is higher than his Wonderlic score.

In Blaine Gabbert we trust? Oh, or Chad Henne. I hope the masses understand that it wasn't Jaguars owner Shahid Khan's choice to not bring in the adopted-son of Florida, Tim Tebow. The people in Tebow's camp, including himself, and not God, wanted Tebow to be a Jet for more than one reason:

A) Under new head coach Mike Mularkey, it's no guarantee that Tebow would have beaten out Chad Henne and or Blaine Gabbert for the starting job.

B) The Jaguar fans aren't exactly the type to rent out billboards along Northeast Florida clamoring for 'Tebow-time'.

C) The Jaguars are terrible.

All that being said, general manager Gene Smith has a couple really good options at pick #7. With any luck, Oklahoma State receiver Justin Blackmon finds himself slipping out of the top six. At that point Gene Smith would have a no brainer on his hands. Blackmon's a big target with great hands and a terrific ability to move down the field after the catch. This however would mean Cleveland selected Tannehill, the Bucs opted for Trent Richardson, and St. Louis didn't want to pass-up on Morris Claiborne, none of which I see happening. Next we move onto the safest possible move, take the South Carolina defensive end Melvin Ingram. Nearly 280 lbs. of dominate speed coming off the edge looking to bury a rookie quarterback in Indianapolis, a second-year quarterback in Tennessee, and a fragile quarterback in Houston, it's a quality move. Finally, DON'T DRAFT MICHAEL FLOYD. He got himself into enough trouble in South Bend, Indiana and I've been to J-Ville, it's way more fun than South Bend.

It worked out for Washington, in the short term however. True, they get Robert Griffin III, a dynamic athlete of whom we should all be a little more skeptical of, but terrific athlete none the less. I'm going to just say it, Cam Newton helped Carolina win six-games in his rookie year, and I don't believe they are the same exact player at all, Cam's better. So yes, I do question that it isn't as much of a slam dunk as we're making it out to be. The (3) 1st-round picks it cost them and a 2nd-rounder, not a big deal, that is if you think RGIII is the guy you've obviously made him out to be. As far as St. Louis goes, someone in that organization is willing to

possibly trade themselves out of Justin Blackmon, a huge mistake in our opinion. At pick #6 the guarantee that Blackmon is still around is not as favorable as it was at #2. If the rumour is true and St. Louis could have done the same deal with Cleveland but kept themselves in the top five and didn't for whatever reason, well that's just crazy. Holmgren could offer the #4 pick to any number of teams willing to put together a package big enough to take Blackmon. What if Jacksonville comes calling on draft morning? They trade-up and take Blackmon at #4, Tampa sticks with Claiborne at #5, leaving St. Louis to scramble at #6 possibly taking Fletcher Cox the defensive tackle from Mississippi State, and Cleveland can go ahead and take Trent Richardson at #7, the same guy they would have taken at #4. I agree, the package that Washington put together for RGIII was worth it to pull the trigger, especially if you believe in Sam Bradford, but show you believe in him by locking up a talent like Justin Blackmon.


1. Will the defending AFC Champion Patriots use their late first-round selections to move up, and to where?

I'm not sure if New England even has to, to get what they want that is. They don't have the ammunition to do what they did in 2008 by moving up to get Jerod Mayo, and even if they put it together, who is the player of need worth it, as Mayo was then? Boston College linebacker Luke Kuechly is a terrific player, but it'd cost to much at this point and they've already got Brandon Spikes, who isn't 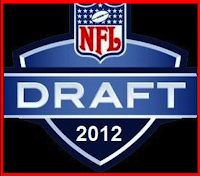 all that bad. With drafting where they are they can improve their defensive line after the departure of Andre Carter, and wait to see if any particular player they've highlighted on their draft board begins to slide. Would it shock people if they stepped-up to select Janoris Jenkins, despite the off-the-field issues? Here's a talented cornerback/return-man who with any other rap sheet would find himself amongst the top 15-selections. Florida connections, has the call been made to Urban about just how frustrating Janoris was? Is North Carolina defensive end Quiton Coples the type of player that Belichick would try to move up to take if he began a draft-day slide? As always with New England, you really never know, right?!?!