Denver Broncos Heading into the draft, I may have been under the assumption that president of football operations John Elway was moving all his chips to the center of the proverbial table and adding pieces around his off season gem, future Hall Of Fame quarterback Peyton Manning. Coming out of the draft, I really don't see where he did that, in any way, shape, or form. Their first selection of the 2012 NFL Draft wasn't until the second round at pick #36. They 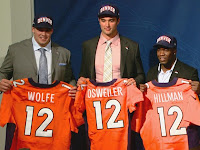 added a defensive tackle, sure a need position for Denver but I'd consider their pick, defensive tackle Derek Wolfe as a late second or early third-round pick, not selected over Michigan State's Jerel Worthy and Connecticut's Kendall Reyes, the pick was a miss. When they finally picked on the offensive side of the ball, they took a quarterback! Project Arizona State signal-caller Brock Osweiler at number fifty-seven! Would Elway himself have been comfortable with the Broncos ever taking out insurance on him? It wasn't till pick #108, when the Broncos selected a center, that I felt good about their draft at all, they filled a need with Baylor's Phillip Blake, and we can live with that. However, the real miss was passing on impact running back Isaiah Peed and waiting till the following round to take Ronnie Hillman from San Diego State. Final Grade: C

Kansas City Chiefs Before this draft we promised ourselves several things, one of them pertains to the Chiefs. Any team who reached on Memphis defensive lineman Dontari Poe was automatically failing the post-draft grading process. However, while the Chiefs did take Poe with the 11th pick overall, I did like nearly all of their late round picks. Fifth-rounder, Alabama corner back DeQuan Menzie is a terrific pick in the late rounds. Running back Cyrus Gray from Texas A&M in the sixth round gives the Chiefs even more depth in the backfield after acquiring Peyton Hillis already this off season. Finally, the addition of Michigan receiver Junior Hemingway in the last round is just a pick I like because I've always been a fan of the Wolverines. Final Grade: C

Oakland Raiders The draft has been over for four days now and I'm not sure if the Raiders have picket yet, are you? Not being able to pick before 94-players were off the board doesn't exactly give you an edge on the competition. What else can really say about a team that traded away prime selections for the corpse of Carson Palmer and Terrelle Pryor through the supplemental draft, neither of who will take snaps for this team by the end of 2013, but I digress. I do however like one pick the Raiders made. In the fifth round the Raiders added 6'4" receiver Juron Criner from Arizona. Criner had a monster year two seasons ago in 2010 and was an All-PAC 10 selection. With the new addition of free-agent back-up quarterback Matt Leinart, it's possible the Raiders are just looking to add some depth all around. Final Grade: C+

San Diego Chargers I loved nearly everything about the Chargers draft, but then again they've always had a knack for adding talented players onto their roster. Their selection of Larry English, the outside linebacker/defensive end from Northern Illinois back in 2009 didn't work out the way they had hoped, but it didn't deter them from attempting a similar move this year. As South Carolina speed rusher Melvin Ingram slid down draft 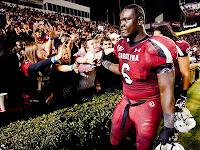 boards last Thursday night, the Bolts pulled the trigger at #18 in the first round and took him, great pick and we loved it just like we loved English back in 2009. In consecutive rounds the Chargers improved their defense again and again. Ingram in the 1st, Connecticut defensive tackle Kendall Reyes in the 2nd round, and LSU safety Brandon Taylor in the 3rd round, all fantastic picks. The hope for San Diego is that two of these three defensive players become pro-bowlers and impact their defense for some years to come. We always love when a team attacks one side of the ball that they really need improvement on, and with San Diego, the 20th ranked rush defense last season, this did just that. Final Grade: A-