And I'm back at it. After a much needed vacation, celebration of America's birthday, and watching 16 hours-a-day of Pawn Stars and American Pickers, I'm back. Now with just two of our four major professional sports remaining open for business, Let's Get After It!

Been watching a ton of baseball since The Cup Finals concluded, and it's refreshing a bit. Got to see the Red Sox play in Houston, Pittsburgh, and Philly, not ballparks you see every night. Watching the Yankees maneuver

Jeter's 3,000th hit to take place in The Big Apple. The Minnesota Twins pulling the trigger to move their $184 million franchise cornerstone catcher Joe Mauer from behind the plate to first base. Mets shortstop Jose Reyes having a career year before slamming into the DL. Phillies ace Cliff Lee flat out dominate in his first year back in Philadelphia. Now, that has got you pretty much caught up, right?!?! If not . . .

Our Red Sox fix; To my readership, we come first. Down to just one effective starter from the start of the season, albeit an awful start, the Red Sox overtook 1st place with a 10-4 win over Baltimore on Thursday night. With the most wins in the American League (52), an awfully deep Red Sox team has really impressed over the first three plus months of the season. The 35-year old David Ortiz is on pace for his most productive season since 2006. The All-Star designated hitter has slugged 18 homers before the break to go along with driving in 50 runs. Newly acquired All-Star 1st baseman Adrian Gonzalez has came along as advertised. Leading the American League in batting average (.351) and runs batted in (76) Gonzalez has delivered exactly what Red Sox brass had expected, and more. Staff ace Josh

Beckett, the remaining effective starter, has given the Red Sox ace stuff throughout the first half. With a 2.12 era in sixteen starts heading into Friday night, the 31-year old starter boasts three victories against division rival New York and and one against Tampa. Finally, in a bounce back season from playing only 18 games a season ago, centerfielder Jacoby Ellsbury has been fantastic. The catalyst of the Red Sox lineup, Ellsbury, is on pace to record career highs in nearly every statistical category. How good is this Red Sox lineup?!? While Ellsbury is stealing fewer bases this season, the offense of Pedroia, Youkilis, Gonzalez, and Ortiz have him on pace to score more runs than he has in his career. Oh, and all this is while getting next to nothing from injured off-season acquisition Carl Crawford and 'in-a-contract year' J.D. Drew, making $28 million between them.

Guy who 'hates the All-Star Game,' it's a treat! It's for the fans, it's all for the fans. Three reasons why I'm very, very excited for All-Star Game festivities: (1) Why has it taken so long for baseball to add the wrinkle of picking captains for Home Run Derby teams?!?! It's great! Big Papi kept it American League East picking his sluggers. Teammate Adrian Gonzalez (17), Blue Jay Jose Bautista (29) the Major League leader, and Yankee Robinson Cano (15). National League slugger Prince Fielder added his Brewers teammate Rickie Weeks (16), Dodger Matt Kemp (22), and Cardinal Matt Holiday (13). Next, (2) Let's rip the Yankees. In an event for the fans, Yankees legends Derek Jeter and Mariano Rivera have opted out of the All-Star game to deal with lingering injuries, oh and that jerk Alex Rodriguez! Guys, you play an inning or two then joke around with other players for 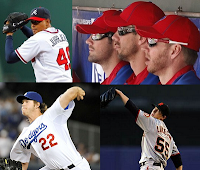 the remainder of the game while in the dugout. Doesn't matter if you thought you deserved to be there or not, the fans want to see you play alongside others you don't typically play with! But no, don't show up, it's to much of a strain on you right?!?! Finally, (3) The National League All-Stars are a virtual who's who of big-time arms! Start off with the Phillies three-headed monster of Cliff Lee, Cole Hamels, and Cy Young front runner Roy Halladay, 381 strikeouts between them. Giants ace Tim Lincecum, a 2x Cy Young award winner, is headed to the All-Star game allowing just 6 runs in his last four starts. Dodgers hard throwing lefty Clayton Kershaw, who is coming off an eight-inning gem against the Mets on Thursday, oh and he's the games leader in strikeouts with 147. Finally, the Atlanta 25-year old Jair Jurrjens whose mind boggling 1.87 era and twelve wins are both the National Leagues best. Expect a low scoring one here! (I fully understand this didn't sell you on the ASG) 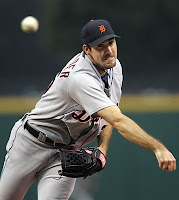 through the first half. Verlander has thrown three shut-outs and allowed 1-run another three times, brings him to a 2.26 era! Just looking at the numbers alone, how could anyone else come up with a more viable candidate to take the Cy Young?!? Verlander is 1st in the American League in innings pitched and strikeouts, as previously mentioned. He is second in complete games and wins, all major reasons his Tigers are just a half game out in the American League Central. With wins against a slew of American League pennant contenders, there isn't a better starter you want getting the ball in a big game!

How 'bout them Pirates!?!? Former Colorado Rockies manager Clint Hurdle has got his new club in Pittsburgh contending for the National League Central crown. Tied with St. Louis and sitting a game back of 1st place, the 46-42 Pirates have been impressive throughout the first half. With their only All-Star being an unknown, closer Joel Hanrahan, they've been flying very quietly under the radar despite taking two of three from Boston just a couple weeks ago. Back to the Hanrahan for a second, this kid has a 1.34 era and is amongst the league leaders in saves with twenty-six, how do we not know about him yet?!?! They've got a bonified All-Star snub in twenty-four year old outfielder Andrew McCutchen. A top twenty-five home run hitter, a top-twenty rbi guy, and McCutchen doesn't get in?!?
Posted by Lynchy at Friday, July 08, 2011