In full disclosure, I've never been a 'hockey guy.' With that being said, a Stanley Cup Finals is one of the few things in sports that can bring the most casual of fan into full blown fandom!

Being at the epicenter of the Boston Bruins Stanley Cup Championship has really struck a chord in me. A chord which wasn't located during three Super Bowls, when the Boston Red Sox stormed back down 0-3 or when they answered the bell yet again in 2007, and not even when Kevin Garnett declared to the 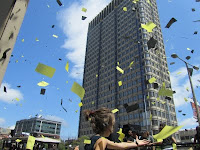 world that "ANYTHING IS POSSIBLE" in the wake of the 2008 NBA Finals. Living in New England for all twenty-eight years of my young life, I've seen my fair share of champagne showers, veterans finally getting "theirs," and over the top championship parades, but this was different. It seemed to have real meaning, similar to the 2004 Red Sox. It had those 'could go either way' moments, similar to that of the 2001 New England Patriots. And it wrapped rather anticlimactically, very similar to the 131-92 blowout of the L.A. Lakers by the World Champion Celtics in 2008. It had it all, and for that, we seem to appreciate this one just a little bit longer, and just a little bit more.

The players first and foremost captured us. The Conn Smythe winning goalie, Tim Thomas, was flat out brilliant. He played the part of Tom Brady, David Ortiz, and Paul Pierce as if he had been playing it for a decade. Captain Zdeno Chara, the 6'9" defenseman, was everything we'd expect from the leader on this team and even now almost a week since winning the Stanley Cup, Chara might still be clutching the trophy. 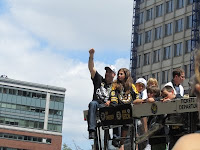 Veteran and 43-year old Mark Recchi was one major story of these playoffs. Coming back for one final season and an opportunity for a 3rd ring, Recchi will go out on top in dramatic fashion. Injured star Nathan Horton pouring out 'Boston ice water' onto the Vancouver rink prior to Game 7 will be engraved in the history books a Cup finals memory for the ages. Then there was Bruins rookie Brad Marchand. The Bruins left wing tormented Vancouver for seven games. He refused to be pushed around, bullied his way through the Stanley Cup Finals, and did all of it while being shy of six feet tall. He best exemplified what the Bruins players were able to accomplish against the Canucks. They plowed their way through the finals against a team which was all but anointed a Stanley Cup. The Bruins went after the cup from every aspect and just stunned a Canucks team which thought it was going to be handed to them. These are players which make up a champion, true to form.

Boston just does it better. Now I don't know what it is like in other cities, but I find it very hard to believe that they do it like this. On Saturday afternoon, everyone across The Commonwealth, hurled themselves toward Boston and rightfully so. Decked out in Black & Gold, painted faces, creative signs, children of all ages, these fans were on edge. They'd waited 39-years for the lid to pop off and out come a Stanley Cup. They sat and watched the Red Sox hang up 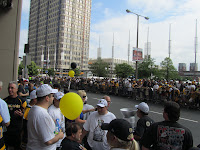 a couple banners, the Patriots turn themselves into a dynasty before their eyes, and the Celtics go from worst to first reinventing themselves for the next five years in little over two weeks. Now it was their turn. They cried, grown men, maybe sober, crying. Then they let it all out, they celebrated all afternoon and into the night, I'm sure the work in Boston is suffering the first two days of this week with the parade hangover still working it's way out. But Boston is different, because they get behind the winners better than anyone, they travel far and wide to watch their teams win championships. The ownership groups of all four major professional sports teams thrive off of each other and the fans repay them with packed houses. Yes, we've won for a while now, and things take their course, but I don't see this ending anytime soon, anytime.

Even after writing this, I can't exactly put my finger on what made it different, but I know it was there. I know what was built up, I know what it presented itself as, I know 39-years isn't that long, especially to Red Sox fans who are also Bruins fans, but this had it all. Now I'm not going to tell you I'm now a 'hockey guy,' but I am a Bruins guy. On Bandwagon. Check.
Posted by Lynchy at Tuesday, June 21, 2011