Unlocked. No more film of player representatives in business suits, strap on your chin straps. It feels good to get writing about the NFL, so we're going to dive right in!

For the Nnamdi Asomugha followers out there, pull up. The top free-agent to hit the market turned 30 this month and isn't going to be the key to anyone reaching the Super Bowl. Yes, he is a nice player, yet in a quarterback driven league, sure up your offensive lines and go out and get a guy who can W-I-N.

The Philadelphia Eagles are in the proverbial quarterback driver's seat. They've got a huge chip to deal in quarterback Kevin Kolb, a young player with a short sample of success. With the Eagles being forced to hand the keys of Andy Reid's offense over to Michael Vick (100.2 QB Rating in 2010), Kolb was the odd man out. Why is he so valuable?!? Kolb isn't a castoff because he's been a mental midget somewhere else, see; Vince Young. Kolb isn't an 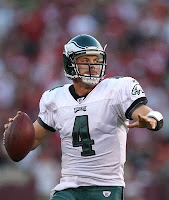 older veteran with a couple years left in the tank at best, see; Matt Hasselbeck. Seattle already seems to be moving on from the prospect of getting Kolb so move right onto Arizona. It may cost them a first-rounder and more, but it's worth it. With that . . .

The Arizona Cardinals have got to make the move for Kolb. With Larry Fitzgerald being key to the Cardinals offense, a receiver with a far above-average skill set, nothing is more important than quarterback. A 26-year old Kolb throwing passes to a 27-year old Fitzgerald for the next four to five years?!? That's the Cardinal offense. Don't be shocked if the Cardinals balk at a Kolb deal however, this is the same franchise who bought stock in Derek Anderson a year ago.

The Seattle Seahawks are clueless, just clueless. First a year ago paying former Chargers third-string quarterback Charlie Whitehurst, $8 million dollars over the next two seasons. They passed on a couple athletic quarterbacks during the 2011 NFL Draft, and have already written on off Seattle veteran Matt Hasselbeck, the same Hasselbeck who threw for 3,000 yards last season. Most recently, the Seahawks have been rumoured to be very interested in athletic Minnesota castoff Tarvaris Jackson?!? Former Vikings coordinator now Seattle's, Darrell Bevell, 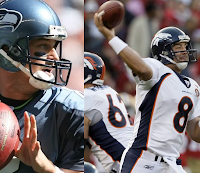 might be the link between a Tarvaris to Seattle move, but if the Seahawks are planning on doing anything this season, they may have to stick to running the ball.

The Cincinnati Bengals are turning the team over to rookie quarterback Andy Dalton while long-time Bengal Carson Palmer has demanded a trade and Cincinnati refuses to grant him one. So long as new offensive coordinator Jay Gruden feels that Dalton is ready after a very short prep period, the Bengals are prepared to move forward with a rookie under center in 2011.

Another rookie, Carolina Panthers quarterback Cam Newton, will most likely be the other rookie signal caller to come out of the gate. Like the Bengals, the Panthers aren't going to be giving much time to Newton to prepare. Yet if any quarterback can alter the plan and come out with some surprises, it could be an athletic Newton who has shown he can improvise on the spot, at least at the collegiate level.

The Minnesota Vikings selected quarterback Christian Ponder in the NFL Draft back in April, but I have a sneaking suspicion they too are in the market for one of two quarterbacks. My guess is Broncos quarterback Kyle Orton who understandably will not take a liking to playing backup to Tim Tebow but can most likely be a bridge quarterback to Minnesota in a division he is familiar with. Also, veteran quarterback Donovan McNabb could possibly be an answer, not a very good one albeit.

Over the next few days, some of the most active days in offseason movement we'll ever see, the quarterback rotations are going to be set for most likely each and every one of these field generals. Where will Hasselbeck land? Is Kyle Orton headed back to the NFC Norris? Where will Vince Young get another shot?