I'm trying to squeeze in as much baseball prior to the NFL Frenzy that is about to take place. With the NFL Lockout wrapping up, these are my MLB Weekend Notes.

It was good to see pitcher Dontrelle Willis back on the mound Sunday night. The 29-year old Cincinnati Reds lefty had another solid start going six innings allowing just three runs yet not factoring in the decision. In three starts with the Reds, Willis has allowed seven runs on 15 hits. I can't help but think that under Reds manager Dusty Baker, Willis couldn't have a better man in his corner as he attempts to regain control of his career. He's a pitcher we've always wanted to see do well.

The 'sure-to-be-dealt' Mets outfielder Carlos Beltran needs to be quiet. After coming out this weekend and making it clear he would much rather 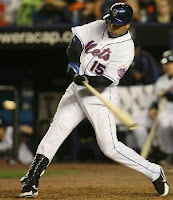 be traded to a National League contender as oppose to moving to the American League, the Mets can't be happy. With full no-trade protection, Beltran is in the driver's seat. The reality here is, whatever any contender gives up, it's for an outfielder with a good bat that will be no more than a rental for the remainder of the season. Beltran will go to free agency in the winter and look for the highest bidder, that's clear. The Mets are going to have to watch their asking price go way down now. My suggestion?!? Make Reyes available, trade the two of them, and move on.

The American League Central is decided. Cleveland and Chicago don't have what it takes to contend deep into this thing. The Tigers behind Justin Verlander are strong enough to win this division and should. Both Jhonny Peralta and Miguel Cabrera are having very good seasons offensively and with pitcher Rick Porcello turning things on as of late it looks like the Tigers have developed a very good 1-2 from their rotation. I like the Tigers to run away with this thing in a few weeks.

Why wouldn't Seattle make ace Felix Hernandez available? The Mariners strikeout king has got all the tools to lead a contender to the World Series, the only problem is, Seattle has got no chance at making it to October play. Losers of 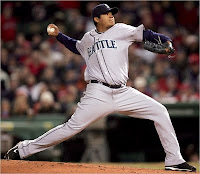 15-straight, Seattle needs help. There are several teams that would pay a huge amount for the talents of the Mariners 25-year old righty. In eight of their fifteen losses, the Mariners scored two or fewer runs, they're bad. How many years do you hold onto Felix with no hope at improving? See the Indians dealing both Cliff Lee and C.C. Sabathia when they had to turn things around.

Red Sox outfielder Carl Crawford looked pretty damn good in his first six games off the DL. Albeit against the Orioles and Mariners, Crawford looks to have his swing back after sitting out twenty-four games with a bum hamstring. Against Seattle on Sunday afternoon Crawford led the way with three hits and a pair of runs batted in. In Boston, things are looking awfully good if we haven't said it enough already.

I really liked newly anointed Hall of Famer Robbie Alomar as a kid. Yes he was a 12x All-Star, yes he was a 10x Gold Glover, but his two World Series rings might be the things that shine most from his playing days. As an uber important part of the 1992 & 1993 back-to-back World Series Champion Blue Jays, Alomar made his career. Playing alongside Cal Ripken later in his career, I got to really appreciate how good Alomar was. Hats off.

Furthermore, With Bert Blyleven also joining Alomar at the Hall of Fame yesterday afternoon, be prepared to watch each and every 'PED' player not reach The Hall as borderline players such as Blyleven reach the honor.

Check out the TheRightNowPodcast for Episode 7 of our third season!