As a long-time fan of the Milwaukee Bucks (work with me here), I wake up with nightmares at least twice a week during this time of the year. No, not because the Hong Kong wunderkinds Yi Jianlian never worked out after being selected 6th overall in the 2007 NBA Draft. But more so because of the '98 draft night 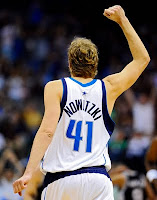 deal which sent a 7-ft. German born kid named Dirk Nowitzki and Charlie Brown (doesn't matter that it was Pat Garrity) to Dallas in exchange for the late Robert Traylor (4.8 ppg, 3.7 rpg, career). Yep, ladies and gentlemen, that one stings a bit.

While the Bucks have mired in mediocrity and worse, the Dallas Mavericks West German native Dirk Nowitzki has become an MVP, perennial All-Star and future Hall of Famer. In the midst of his second crack at the Larry O'Brien, Nowitzki has an opportunity to add another title to his NBA legacy before his 34th birthday, NBA Champion. Based on the last two weeks, it might just happen.

In Game 2, after suffering an 84-92 loss to Miami in Game 1, it was Nowitzki who strapped the Mavericks to his back and went off ripping another victory from Miami in the 4th quarter. Outscoring the Heat 24-18 in the 4th quarter, including 15 points from Nowitzki, the Mavericks overcame the deficit and knotted the series up refusing to dig themselves a deep hole so early in the NBA Finals. Maybe it was the early celebration from Miami's Dwyane Wade that triggered Dirk to go off and not let happen in 2011 what happened in 2006 against the Heat and Wade. Or maybe it was just him pushing 34 and knowing that the window is drawing very low for Jason Terry, himself, and veteran guard Jason Kidd. Either way, Nowitzki proved yet again why he's an instant Hall of Famer.

In Game 4, again after a loss, their first home game of the NBA Finals, a flu ridden Nowitzki would do the same for the Mavericks as he had in Game 2, not let them lose. Being exhausted with sickness, a 101 degree temperature, and a sleepless night the night prior, Nowtizki scored ten points in the final quarter and 21 in the game to give the Mavericks the late boost they needed. His 11 rebounds, five of which came in the last quarter as well, don't go unnoticed as they were essential in preventing second chance opportunities for the Heat and giving them to the Mavericks. A series knotting victory, 86-83, put the Mavericks in position to take a lead in the series in their own house in Game 5.

No matter the turn out in this series, Dirk's career performance has been key to the Mavericks rise to the top over the past decade and that can't be ignored. To think, the Bucks gave up the Wurzburg, German native for The Tractor. Well, that's just rough.