As Good As It Gets

I'll say this for the NBA, high drama ain't got nothing on you my friend. Three-days removed, you're still pulling more interest than Game 7 of the Stanley Cup Finals. 'Dirty Dirk pulling the Shia Labeouf and transforming into a closer. Veteran and future Hall of Fame guard Jason Kidd reaching the mountain top at thirty-eight. LeBron James, a.k.a. Captain Obvious, telling us our lives suck compared to his. Dwyane Wade's post game J-Crew wardrobe, yup the NBA Finals was worth the nine months it took to get there.

It really sucks to be handed the Larry O'Brien Trophy, hear me out, when the story ultimately finds its way to who lost rather than who won. That's how we are going to play this out. I love Dirk Nowitzki, he's a Hall of Famer with or without the ring, but boy does it shine. Nowitzki turned into the player the world needed to see

him be during The Finals. Time and time again, Dirk came through in the clutch, the fourth quarter, the end of the game, whatever you would like to call it, he got there. Here's a guy who for all intents and purposes flipped the proverbial script on his career over the last two months. After losing the 2006 Finals, jetting off to Australia, and never coming as close since then, Nowitzki wasn't given the opportunity to win a ring, he took it. As feel good stories go, watching Dirk, relieved and exhausted, rush to the locker room to let out the emotions that had been built up for his entire 13-year career, well that was all we needed. It felt great. (Oh, and it was hilarious to see him with the Championship hat on looking like a little dutch boy, clutch moments.)

You feel good for 11-year veteran Shawn Marion, you feel good for Jason Terry, a Maverick for the past seven seasons through thick and thin, you feel great for the embattled Mavericks coach Rick Carlisle, but save everything for Jason Kidd. The future Hall of Fame point guard, three months from his 38th birthday, the 1995 Rookie of The Year, do the math he's been around for a very long time and now he got his. I don't need to do any reading on this one, I watched Kidd play in the Eastern

Conference for over six seasons with the New Jersey Nets. He battled the Celtics early on in Paul Pierce's career, I was at those Conference Finals games where Kidd was getting all the abuse of a packed house in Boston. We hurled insults at Kidd, relentlessly, and Jason Kidd did nothing but perform at the highest level. At every stage in his career it was something else, another reason why we shouldn't believe in Kidd, he couldn't shoot, he was limited, he was getting old, and still Jason Kidd continued to show up and contribute. A couple of three-pointers, eight assists, and all the leadership you could ask for from Kidd in these finals. When asked at the end of the game, with all of the emotions of becoming a champion running through him, Kidd's response to whether or not he would come back or go off into the sunset "I don't know, I think I got another three years with this group in me." Wow, a legend.

Finally, to Mavericks owner Mark Cuban. Right down to his class act of bringing on Don Carter, the original owner of the Mavericks to get handed the trophy, Mark Cuban became something different over the past weekend. A man who undoubtedly learned from his mistakes in 2006, making everything about the officiating and distracting his team, Cuban left it all up to them 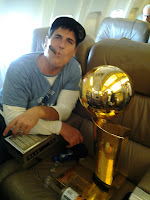 and took a back seat in the moment he probably wanted to do the exact opposite. How can you not recognize Cuban's silence during these playoffs, his constant belief in Dirk when the detractors were out in full force, the hiring of Carlisle, staying with Jet Terry, Mark Cuban has got to get his at some point. In addition to everything he's been for Dallas, taking them from obscurity and a laughing stock to NBA Champions and contenders for the past decade, the guy must be the first owner to accept a Larry O'Brien Trophy in a t-shirt and jeans. Much respect, especially when he's picking up the tab for the Mavericks championship parade.

Now to the losing Heat. They're most likely going to get at the very least, one. Realistically here, we now know what exactly Miami is and have no remaining questions as far as I'm concerned. (1) LeBron's a #2 now, it's about time we get used to it, if we haven't already. His post game press conference showed the immaturity. His Finals performance displayed what he lacks, the ability to adjust and the ability to overcome. He's deferred all season long, in pictures, in-game, post-game, in every way he's allowed Dwyane to remain the 'Alpha-Dog' of this squad. I'm not buying stock in this guy. (2) With that, Dwyane should be held

accountable for his immaturity as well. Mocking Dirk Nowitzki, failing to do the stand-up which teammate Chris Bosh was able to do after Game 6, yes Dwyane Wade needs to do exactly what Chris Bosh did. He appears angry, frustrated, and tired after this NBA season. Wade should have told the Heat "No, we're not starting off with this celebration in Miami," and he didn't. (3) The pieces didn't fit at the end. Boston made LeBron shoot those shots and in that particular series he made them, when Dallas made him do it, he couldn't hit those shots. They had no answer off the bench consistently, no coach who could draw up plays like Rivers, put the parts together like Carlisle did, it's the bottom line. All this being said, the Heat were very close to being up 3-0 in this series with commanding control, so for someone to say they aren't going to eventually win, be honest, they'll get at least one.

Sidenote: I've got to give some credit where it's due, to Heat forward Chris Bosh. A player who endured a ton of criticism because of who he is throughout the season. Whether it was him latching on to the other two stars on this team to ride the free-agent frenzy this past summer, being called out by LeBron and players

on his team questioning what he is capable of, or the media and their general dislike for Bosh, he withstood. Bosh was honest with the media explaining how the moment may have been to big for him early on in the Celtics series, to his credit he'd never been 'in that place.' Bosh had to be consoled after Game 6, openly showing his emotion immediately after the game with no hesitation, no hiding, just real raw emotion. He gave the Mavericks all their credit first and continued to pay respect at how they handled themselves and overcame, something neither Wade or James were as willing to do after the clinching loss. When teammate Mario Chalmers decided to go after the Mavericks DeShawn Stevenson, not LeBron or Wade were the ones yelling at him and telling him to keep calm, it was Bosh. Maybe he isn't the most likable, but I've got to give him credit for being as respectable as he has been the last couple weeks.

With this all down, I'm definately excited heading into next season, just as I should be at the wrap of any regular season of professional sports. Follow me on Twitter . . .
Posted by Lynchy at Tuesday, June 14, 2011