Southern California was stripped of their 2004 BCS National Championship on Monday afternoon, June 6th, 2011. So, the 12-0 Trojans smashing of Oklahoma 55-19 on January 4th, 2005 didn't actually happen?!? To the readers passing by this short column in 2035, that happened. The embattled Trojan running back, Reggie Bush, was easily one of the top, if not the top, collegiate player in the decade. No doubt. Get 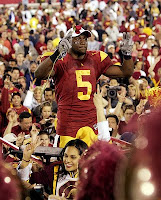 To former Auburn coach Tommy Tuberville, you better be careful here. After calling for the BCS to make your '04 Auburn Tigers the retroactive National Champions, you really better hope your Tigers were 100% clean. Nobody notices how the SEC powerhouse and current defending National Champions haven't said they too support Tuberville's opinion?!? Of course they won't. In five years famed Auburn quarterback turned #1 NFL draft pick, Cam Newton, may be facing the same backlash as former Trojan Reggie Bush, as may the Tigers. Not fair you say?!?! Life isn't fair. Tuberville and Auburn deserve the National Championship in 2004 as much as I do, that's not at all if you're scoring at home!

To ESPN talking head Dick Vitale, how dare you go down that road! On Tuesday morning Vitale sounded off on the actions of one Reggie Bush by saying this amongst other things, " . . .he embarrassed the school," please.

For Vitale, a man who has spent much if not all of his adult life around young men, to paste a 20-year old Reggie Bush to the wall is ludicrous. Vitale wouldn't have a nickel to his name if not for young men like Reggie Bush. His career spent in college hoops, well Dick if you don't have young men, who make mistakes from time to time, you wouldn't have a job! To hear Vitale say Bush embarrassed The School, be real. Southern California isn't being laid out on the pavement for the actions of just Reggie Bush, they're being put down because their lax behavior and their willingness to turn a blind eye. No the kids there now, and the administrators and coaches might not be responsible, but by the BCS and the NCAA doing what they've done, they're attempting to get the message across to a school who needed a message sent. Dick, they embarrassed themselves!

To the BCS/NCAA, it's too easy. I agree that Southern California should be punished, as bad as you want to punish them, but make it about the school not the athlete. The system breeds some things and what Reggie Bush did and took part in, well he is a product of his environment. I don't excuse Bush by any means, but do you realize that we are doing all this to one person? On a human level, aren't you more concerned or shouldn't you be about the system which breeds this? I get you 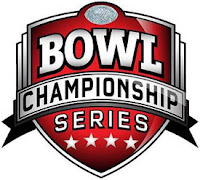 took away 30 scholarships from the program, Bush was forced to give back his Heisman, and they're banned from postseason play for a few years, but the way we continue to speak about Bush as if he really hurt someone, it's just wrong and not true. It's to easy for the BCS to come out and say things like, "we're sorry but the actions of one man, his selfishness, well that's what lead you to this." But is that really what lead USC to this?!?! Or is it that USC let these type of people around the program, these marketing companies, these boosters, etc. Gentlemen, we get it, you're very good at slamming the door when somebody has already left, but what are you doing to stop these things before they happen?!? What is being done to make sure players don't have the ability to sell memorabilia, don't accept cash from boosters, what else are you doing before the horse is left out of the barn?!?!

By writing this I don't intend to defend Reggie Bush and his actions, and I apologize if I come across as if I am. However, my intent is to challenge you and your opinions as well as that of the media. It's too easy for us to pin on Reggie and his mistakes and place blame just on him, despite that being just what we do. We find a guy who we can blame and put it all on him so it's clean and we can tie a bow on it. The coaches (Jim Tressel & Pete Carroll) sacrificing character for money, can you blame them when we're willing to pay them as much as we do and let them leave whenever they want to?!? The media (Dick Vitale) is terrified to lose access to coaches, administrators and presidents, so they blame the defenseless, the athletes. The schools (USC & Ohio State & Auburn & it goes on) they stick their heads in the sand because it's easy, people keep their jobs, they make money, and when it's all blowing up, you have the built in scapegoats, the athletes.