All the numbers and then some. The two twenty strikeout games, the postseason performances and the hardware to go along with them. Yet on August 19th, the greatest pitcher of the past 30 years was indicted by the Federal Government for failing to tell 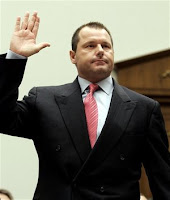 the truth while giving sworn testimony to the House Committee on Oversight and Government Reform in February of 2008. As a federal prison sentence hangs in the balance for Roger Clemens, his Hall Of Fame considerations, his records, his mystique, and of course his 24-year Major League Baseball pitching career is taking a back seat. The Rocket is now staring down the Federal Government, the toughest opponent to ever set foot in his batters box. Whether your of the mind that Clemens should suffer the same fate as Marion Jones, who did prison time for committing the same crime as Clemens has been indicted for, or that the government should be aiming their time at other bigger problems in this country, it's time to sort it out.

Former Olympic sprinter Marion Jones was celebrated at one point as one of the greatest female athletes of all time. After being stripped of her five Olympic medals for admitted performance enhancing drug use during the Sydney Olympic games, Jones was sent to federal prison for lying to two grand juries including lying to federal agents during an open investigation on steroid use. Sentenced to six months in a federal prison, Marion Jones' situation/case should have opened the eyes of every professional athlete, it didn't. Roger Clemens has been

as defiant as any in his fight against the federal government, former trainer Brian McNamee, and the court of public opinion. Clemens refuses to take the road of former teammate Andy Pettitte, major leaguer Alex Rodriguez, and current Padre Miguel Tejada, all of whom chose admittance or bargaining to avoid similar fates. So what now? The greatest pitcher of a generation behind bars if convicted? The gamer that was Roger Clemens is going to challenge the federal government for what? The sniff of PED's around him will push back his hopes for a Hall entrance, the court of public opinion has already been decided. His name was mentioned in baseballs Mitchell Report the second most after none other than Jose Canseco. Roger Clemens is like no other, however when it comes to Congress, he's like every other. If the Rocket did ignore the fate that Marion Jones suffered, refused to take a seat next to Oprah or Peter Gammons, and now refuses to strike a deal with the Feds, then Clemens needs to be placed behind bars, exactly what would happen to you and I if we decided to lie to the Federal Government.

Wait, why are we doing this? Why are we wasting the time of Reform Committees on performance enhancing drug use in athletics? Why, when we have oil spills to cleanup, unemployment to correct, a health care system to sort out, and actual criminals walking the streets, are we indicting Roger Clemens? A major league pitcher? 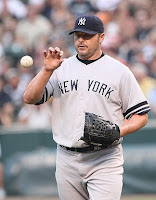 Not a murderer, not a rapist, not a thief, a bloated athlete with millions of dollars. Aren't the same people who are indicting him the same who were asking him for his autograph after his waltz through Washington D.C. back in 2008? Why do our tax dollars have to be used to imprison The Rocket after we paid hundreds to see him play, to play in Boston, Toronto, New York, and Houston. After we paid for his jerseys, his posters, his cards, anything he sold us or his name was attached to for 24 seasons. If the people who elected these officials don't care what he's done, why is this allowed to happen? We know what Clemens was, the smoke alone makes us call foul. We lump Clemens into the same category as Barry Bonds, Alex Rodriguez, and Mark McGwire. We acknowledge what he was doing in his 40's was at the core as unrealistic as it was. I want my tax dollars to be put to much better use than convicting Roger Clemens and putting him in a federal prison. He isn't ENRON, he isn't Madoff, and he isn't a terrorist. So move along please, focus on what we really need in this country.

We'll wait and see the fate that Roger Clemens suffers. We'll see one of the greatest pitchers in the history of this game either go to prison or not. Our opinion can't really change any more than it has, right? The stats, the wins, the mind bending performances, none of it matters at this point. The Indictment of Roger Clemens has become the closing arguement on his career.

Catch more Lynchy on The RightNow Podcast & on Twitter
Posted by Lynchy at Monday, August 23, 2010