Time to get into the NFL. We're just weeks away and I can't contain myself. Preseason games going on all over the place. The Saints and Pats this past week, the prospect of the Cowboys playing a home Super Bowl, Donovan McNabb in a new jersey, Woah! Let's do this.

There's No Matt Ryan, Joe Flacco, or even Mark Sanchez in 2010. For two straight years we've seen some rookie quarterbacks make noise in their first season in the NFL, going so far as to lead their teams to the postseason. Unfortunately for the crop of quarterbacks in 2010, a similar scenario won't be likely. Where Mark Sanchez inherited a top tier defense and outstanding running game and Matt Ryan joined a team which 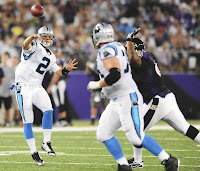 had also added running back Michael Turner during the same off season, none of the rookie quarterbacks this season are walking to these locker rooms. Colt McCoy joins a Browns team with very little to work with aside from tackle Joe Thomas and return specialist Josh Cribbs. Tim Tebow is in the midst of a quarterback competition in Denver, an offense which traded away a Top 5 NFL receiver this off season. As for top pick Sam Bradford, after Saturday nights preseason game with Minnesota, the Rams better get busy blocking if they want Bradford to survive the preseason schedule. Depending on how good Carolina's Jimmy Clausen proves to be in the coming weeks, with the Panther running game in toe, he may have the best shot at repeating the performances of Flacco, Ryan, and Sanchez. If not, close the velvet rope, those three may have no company at all.

Is Pittsburgh done already? Just one season removed from a Super Bowl championship, the Pittsburgh Steelers have more questions than ever, mainly their quarterback. With an offensive line in need of an overhaul, the Steelers need a quarterback like Roethlisberger now more than ever. Cept they aren't getting him for at least

four weeks into the regular season due to suspension. Ugh. (A collective sigh from Steeler nation) As the Steelers plan to move on, throw up the barricades and let the Leftwich v. Dixon competition begin. Needing to win their last three to finish the season at 9-7 in 2009, the Steelers were all in all disappointing. The story of the Steelers can more appropriately be told by what is going on around them. The Bengals were division winners a season ago and added Terrell Owens and another tight end in rookie Jermaine Gresham to improve their offense. The Ravens went out and got Anquan Boldin, a dominating proven weapon in Arizona to add to Joe Flacco's arsenal developing in Baltimore. If I were a betting man and we both know I am, then I'd pass on the Steelers and watch as they get out to a very rough start. Leftwich or Dixon, doesn't matter.

Rumour has it; Ravens v. Cowboys Given the additions of Baltimore and the need for crowd control as 12,000 showed up for Day 1 of Raven camp, it should be safe to say the Ravens are no longer a secret. As for Big D, playoff monkey off their back in 2009, a home game in the Super Bowl looming, and of course one rookie with more hype than DiCaprio's Inception, it is clear the Cowboys are a favorite in the NFC. All that

being said, folks these teams have some question marks. The Ravens have already seen injuries to offensive tackle Jared Gaither, corners Fabian Washington and Domonique Foxworth, and of course All-Pro safety and defensive leader, Ed Reed. If Reed doesn't return for a while after having hip surgery this off season, the Ravens defense is without a huge bite. After an early training camp injury to rookie Dez Bryant, the Cowboys played two preseason games against Cincinnati and Oakland, scoring just two field goals with their starting unit. Is this supposed high-powered offense unable to put it in the endzone? Running backs Marion Barber and Felix Jones have ripped off a grand total of 12 yards combined in two preseason games. Tony Romo was sacked three times in the first series against Oakland. These two early season favorites to head to the Big Dance have some concerns, and they're valid.

Rexy & The Jets He didn't need his own reality show to make the front pages, but he got it. New York Jets head coach and resident comedian Rex Ryan is now story #1 heading into the NFL season. If the goal was to make his team just that, consider it accomplished. The stars of this years edition of HBO's Hard Knocks, are calling themselves Super Bowl contenders, future Super Bowl champs, and one of the toughest teams in the league. Let's put the clamps down on Rex Ryan real quick. (1) If it wasn't for Indianapolis mailing in their last two games of the season and the Bengals resting on their accomplishments, the Jets wouldn't even have made the postseason last year. (2) If quarterback Mark Sanchez takes a step back as both Matt Ryan and Joe Flacco

did in their second years, it's a step back from 12 touchdowns and 20 interceptions. (3) Why wouldn't the Dolphins pay 14-year veteran Jason Taylor? Why couldn't LaDainian Tomlinson, a future hall of famer, get the Chargers to pay him? Why did the Steelers want to rid themselves of former Super Bowl MVP Santonio Holmes? The Jets aren't just smarter than all of these teams. Rex Ryan is a good coach, the Jets got further than people expected a year ago, but let us not forget they lost 1,400 yard rusher Thomas Jones, their workhorse. Oh, and the giant elephant in the room is Darrelle Revis who wants nothing to do with the Jets till they pay him. At the end of this season the stanchions are going to be up, and the Jets will be on the outside looking in at the postseason.

I'm ready to get this thing on.