Turn Back The Clock

To a time where your dinner was on the table after work and your choice of whiskey in the freezer. Where a Derby Saturday, with a prize fight 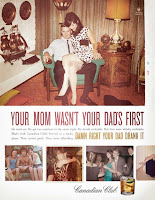 to follow, splashed with a dash of playoff hockey, would have meant a Super Bowl like atmosphere from coast to coast. Now it's all low calorie beers and discussing your feelings while lying on a couch. Be that as it may, Saturday was a day for your father's father, a day to turn back the clock, a day where a scotch on the rocks would have been the perfect happy ending. Saturday, we took it back and got after it.

The Bruins shake New England at its core. Call it a perfect storm for the Boston Bruins to re-stake their claim on the New England faithful. The Red Sox in an early season nose dive, Bill Belichick's unexciting draft selections, the Boston Celtics aging before our eyes, who benefits? The Bruins. Their first round Stanley Cup playoff performance against the Buffalo Sabres built up quite the lather in the Hub. And now they get a piece of Philly? With the Bruins watching cards fall into place throughout these playoffs, facing the 7th seed in round 2, a home ice

advantage, the top seed knocked out, playoff hockey is back with a thunderous roar in New England. Yesterday was no joke. The B's watch a 2-goal lead evaporate in the third period before landing the first punch in this best of seven series. In his first game back from a treacherous concussion almost ending his season, Marc Savard rips a stunning game winner over Brian Boucher's right shoulder in overtime. Game over. If the Bruins can continue their hot streak, despite injuries, New England will take back a small piece of their hockey lore, from a time when Bobby Orr reigned supreme. The Bruins fans shake the building as the NHL reminds us of why playoff hockey is a whole new game. This isn't the regular season, we're all watching.

Calvin Borel rocks The Derby. Seconds after Borel rode Super Saver to a Kentucky Derby victory, the question came up: Why are we picking against anyone else? Missing were the big hats and colorful ties, 11 inches of Kentucky rain will do that to a Derby Saturday. As for super jockey Calvin Borel, the same jockey to ride both Mine That Bird

and Rachel Alexandra to Triple Crown race wins last season, and Street Sense in the '07 Derby, he was in usual form. Holding Super Saver back before riding the rail all the way through the mud at Churchill Downs, Borel stormed into the history books and once again proved why he was a preeminent jockey. This was a race wide open, a race with plenty of question marks, a race that was fit for the old school. A rain soaked day before the clouds opened up just in time to see the ponies line up and beat up the track again. Like so many other sports, the stories present themselves every moment. Heading to Baltimore and The Preakness you have a triple crown threat with the greatest jockey in the business today. Pour yourself a mint julip!

Weathers the storm, remains unbeaten. Now I don't claim to be a prize fight fan. Then again, when your bearing witness to a fighter the caliber of Floyd Mayweather Junior, what other options do you have? 41-0, 25 Knockouts. Tuning up

Shane Mosley post second round, Floyd Mayweather might just be calming the doubters and waking up the possibility of the fight which people want, Pacquiao v. Money. Floyd Mayweather Junior has the same doubters as every historically great athlete, sure he beat Mosley but what about Pacquiao. Like Barkley and Malone against Jordan, like pre-2009 Alex Rodriguez, of course like Patrick Ewing, people question who Mayweather has beaten. After last night, stop with the questions. Floyd Mayweather outsmarted and smashed Shane Mosley, whose next? Taunting, even mocking a man with 39 knockouts on his record. If Floyd Mayweather doesn't make you excited, who will?

A night of playoff hockey, a night of horse racing and prize fight boxing, and you tell me you can't get into this? The Preakness is in two weeks and if the Canadians and Bruins are playing for a shot at Lord Stanley, you bet your a** I'm all in.
Posted by Lynchy at Sunday, May 02, 2010