Can you hear that? It was a pin dropping at The Q. I'm ignoring the 15-0, 4th quarter run which nearly caused 100,000 coronaries east of the Ohio River. As the Boston Celtics tied their second round best of seven series on Monday night with a 104-86 victory over the top seeded Cavaliers one thing if for sure, Cleveland's Shook.

ElbowGATE in full swing, King James looking human, Rasheed Wallace looking like the artist formerly known as 'Sheed, and Rajon Rondo playing possessed, I'd say the perfect storm for Cavalier fans arrived on Monday night, and it could get worse.

I'll start with Rajon, because that is where it begins for the Celtics. Their 24-year old floor general averaged 10 assists and 14 points per game in four games against Cleveland in the regular season. In the first two games of this series, he's pushed those numbers to 15.5 assists and 20 points per game, including a 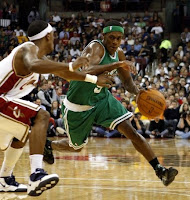 franchise high 19 assists in game 2. The Cavaliers have no answer for Rondo. It isn't just his eye popping on-paper numbers that have you impressed, he takes it to the Cavaliers with reckless abandon. Slammed to the floor in game 1 by Shaquille O'Neal (7-1, 325) , Rondo gets right up. Hammered by Anderson Varejao (6-11, 260) in game 2, Rondo is up. Rondo has the ability to get the Cavs bigs in foul trouble early and often by driving inside, this creates more than just open looks for players like Ray Allen and Paul Pierce, it creates match up advantages all over the court. At some point in this series, the Cavaliers are going to have to rely on Delonte West and Mo Williams to lock Rondo down for more than a quarter, who are you putting your money on?

The length of this series swings the needle to the veteran Celtics, know that. If your a Cavalier, you want back on that court and you want the taste of that butt kicking out of your mouths. If your the Celtics, you want days of rest to get your legs back. Due to the NBA's ability to stretch this postseason from April through June, the Celtics get the edge. After two games in three days, the 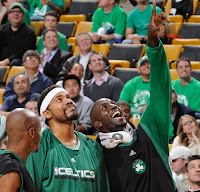 Celtics have a travel day followed by two consecutive off days, we'll see you on Friday night. Think Paul Pierce, Ray Allen, Kevin Garnett, and Rasheed Wallace could use a couple days to rest their combined 51 seasons of NBA miles on their legs? Now they'll be sleeping at home, an added bonus. Sure, the Celtics didn't have a great home record this season, but in the playoffs The Garden II is a different atmosphere. The Cavaliers can't be happy knowing they HAVE to steal one game and take back home court advantage or this run could get derailed quick. Giving these veteran players three games to win one, isn't something the Cavaliers would want to live through if they head back to Cleveland down 3-1. Losing last night gave the Celtics home court advantage, two days of satisfying rest, and the ability to crash the coronation. Not good King James, not good.

They're frustrating at times. When it comes to Rasheed Wallace, that's an understatement. Last night however, the Boston Celtics bench showed up. Rasheed shot well 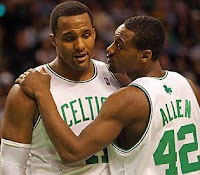 hitting seven of eight shots over 18 minutes off the bench. Tony Allen did his part on defense pulling down four defensive rebounds and recording two steals in 15 minutes. Glen Davis, well he was Glen Davis. Banging inside and forcing low percentage shots, that's what Big Baby did in his 13 off the pine. Give KG rest, hold onto leads, and stop J.J. Hickson, that's about all the Celtics 2nd team needs to accomplish and on Monday night, they did most of that. Tell me the game which the Celtics lose if Rasheed Wallace shoots like he did last night? Tell me the game the Celtics lose if Garnett can stay refreshed. Tell me the game the Celtics can lose when Tony Allen is playing great second team defense.

The Celtics have the Cavaliers stumbling heading into the third round of a seven round prize fight. If Cavaliers are shook now, the coronation may not take place in Ohio.
Posted by Lynchy at Tuesday, May 04, 2010