Not Roy Halladay. Not Matt Holliday. Not Jason Bay. The Boston Red Sox and general manager, Theo Epstein are headed a slightly different direction. A five-year, $82.5 million dollar deal to free agent right hander, John Lackey. Coupled with the signings of 14-year veteran outfielder Mike Cameron and 34-year old infielder Marco Scutaro, the Red Sox have quietly made their moves but I remain On The Fence.

Should come as no surprise. This is what they do. These are notoriously the type of moves Boston has made in recent years, whether it be acquiring Alex Gonzalez not once but twice for his defensive prowess, or going after Coco Crisp following the 2005 season looking for a strong glove and high on base percentage, 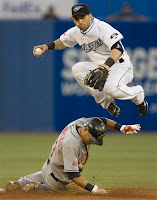 Epstein knows 'his guys' when he sees them.The newly acquired Scutaro is a solid defensive infielder with a ton of shortstop under his belt. Last season while with Toronto, Scutaro turned 99 double plays while committing just ten errors in 143 games. The bright spot would be that Scutaro gives you something at the plate as well as his glove. Just last season the former Blue Jay shortstop had career highs in doubles, homers, and walks. Anyone else shocked that Epstein went out and got an 'on-base' guy? From what the Red Sox and the rest of baseball have seen of Marco Scutaro, it's consistent, exactly what the Red Sox need from a middle-infielder both in the field and at the dish. Lastly, he spent a significant part of his career by the bay in Oakland then Toronto, the same two schools of thought which those franchises ran by, is exactly what Theo runs by. No surprise here.

Bit of a head scratcher. I like Mike Cameron. Or should I say I liked Mike Cameron, when he was hitting .273 with an OBP of .342 back in 2005 with the New York Mets! Hitting just .250 last season and under .260 for each of the last three seasons, this is the guy to replace Jason Bay? Moving to left field would be an odd fit for Cameron, he's been a fantastic defensive center fielder 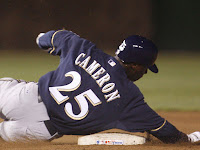 throughout his career but as you know the Red Sox have a awesome defensive center fielder in Jacoby Ellsbury. The real question has to be why him? Cameron is good defensively but at the plate he strikes out a ton, averaging 150 strikeouts a season over the last four. Furthermore, he's been out of the American League since 2003 and now he'll head to the American League East, where the pitching is as good as it gets and the hits come at a premium. A two-year deal which will pay Cameron $7-$8 million dollars a year makes him a 39-year old outfielder making quality big league money. Between Cameron & current Sox outfielder J.D. Drew, the two will be making somewhere around $21 million next year. To me? That just seems like alot of money for an aging strikeout machine and a right fielder who has averaged just 128 games a season since arriving in Boston.

I understand not re-signing Jason Bay, I do. I've always liked Jason Bay, and to see him club 36 homers in a Sox uniform while former Sox outfielder Manny Ramirez was on steroid suspension in L.A., I'm thankful. For $16.5 million a season over the next four? I don't know. That'd put you

in the neighborhood of $30-million plus for your corner outfielders with Bay & J.D. Drew, Theo Epstein isn't touching that idea. While Bay has been pretty consistent throughout his career, hitting .280 and an OBP of .376, the Red Sox shy away from 4-year contracts to players north of 30 years old, as is Bay. I've also got this sneaking suspicion that the Red Sox have that money dedicated somewhere else in their lineup, whether it be now or in a year or two. If you've got $16 million a year dedicated to Bay, how much higher are you willing to go with the next guy your looking to add to that lineup. If the Red Sox are prepared to bring in San Diego third baseman Adrian Gonzalez, whose numbers indicate continued success, the money could possibly be going to extending him. The Padre third baseman is on a fantastic rise. For the last four seasons Gonzalez has gone from 24 homers to 30, 36, and now 40 in 2009. Over the same stretch his on base percentage has gone from .347, .361, and .407 this past season. As Jason Bay goes, the Red Sox have other plans and they don't include Bay, and never did.

They value quality starting pitching, you know that. By adding John Lackey, the Red Sox are solving more than one problem. Problem (1) Their staff becomes tops in the American League, hands down please. Ask yourself this question, 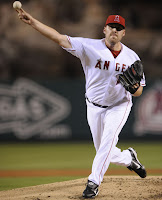 Sabathia or Beckett? Sabathia. Burnett or Lackey? Lackey. Pettitte or Lester? Lester. Done! Problem (2) Scared of not re-signing Josh Beckett at the end of next season and being left with no #1? John Lackey is just two years older than Beckett, and you still keep a Texan if Beckett walks. Win, Win. Problem (3) Injuries, John Lackey protects you from that. Pitching in an average of 30 starts per season since 2003. Lackey also eats up innings, something the Red Sox brass loves. The deal gives the Red Sox more than enough quality starting to get into next season, and Lackey provides plenty of playoff experience. For years I believed that Beckett would be more dominating if he wasn't pitching against other #1 starters every time out, well hand the ball to John Lackey and watch Beckett eat #2 starters for lunch. While his strikeout totals and starts have gone down over the past two seasons, being added to the Red Sox will surely take the pressure off one of the Angels more reliable starters in their recent run. John Lackey is exactly what the doctor ordered.

While I may remain On The Fence, it does seem that the Sox are executing exactly what plan they had in place. Sure up the infield, make a big free agent splash, and beef up your outfield. Check, check, and check! Going forward the Sox have one more move to make and it'll happen before the new year! As excited as I am for that move, I still can't believe baseball is nearly four months away! Thanks for reading . . .
Posted by Lynchy at Wednesday, December 16, 2009