America's favorite column, okay maybe just my favorite column. Keep It Real Friday is back at it again. I can safely say there is just a Tiger comment or two, but nothing extensive. For those of you who are looking to step back from Tiger and get back to sports news. Get After It!

It's too early for baseball. It feels like the Yanks won the World Series yesterday for crying out loud. I could care less that the Red Sox signed Marco Scutaro, he's a lifetime .265 hitter. So what if the Rangers

signed Rich Harden, he was 9-9 last season with an earned run average over four, now he's going to the American League? The Nationals just signed 18-year veteran Ivan Rodriguez, great whose next Julio Franco? Unless your willing to go out and throw around major dollars, Yankee style, I'll pass. on reading about it. One really has to question the "Hot Stove" buzz when it includes the likes of Pudge, Scutaro, and Rich Harden! Give us a few months before we start reporting on who is acquiring what! Keep It Real, I'm too exhausted from their last marathon season!

Can't we just skip this and FF to June? Everyone wants Lakers v. Celts, right? Yes, they'll both probably see some injuries, they'll both lose a few games every couple weeks, but aren't the Lakers and Celts just better than the rest? At 17-3, the Lakers are in the midst of a 10-0 stretch giving them the best record in the Western Conference. At 18-4, the Celtics are in the midst of a 9-1 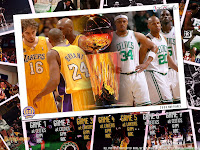 stretch giving them the best record in the Eastern Conference. Notice a trend? They don't lose often, and when they do it's a stunner. The Lakers a top five offensive team in the league, the Celtics a top five defensive team in the league. The Celtics slightly older in the tooth, but most things tend to stay the same in the NBA, they'll be there in the end. For all you Tim Donaghy fans out there (including myself), the NBA referees don't need to fix games, they have two teams who dominate on their own and won't be held back. For Boston and L.A., they couldn't be more different. The Celtics play very good defense, don't make themselves a spectacle, and for all intents and purposes, are very businesslike. The Lakers outscore teams, play occasional defense, and are guaranteed the lead in on Sportscenter. But bank on it, LeBron will still be golfing earlier than both teams and they'll both be playing for that gold ball, KEEP IT REAL!

Thought Notre Dame no longer had clout? Think again. The Irish will shortly announce now former Cincinnati head coach, Brian Kelly, as the newest Golden Domer. The 2x Big East Conference coach of the year will leave a 12-0 Bearcat squad that is headed to their second straight BCS Bowl Game, (this one the Sugar, 2008 the Orange) for the confines of South Bend, Indiana. Whether one thinks it's a good move for Notre Dame or not, the important

thing is it looks like they got their man and within two weeks of the firing of Charlie Weis, Notre Dame is no longer vacant. Not many programs could pull a head coach away from the Sugar Bowl and while a small piece, some piece of the National Championship. Forget what awaits Kelly at Notre Dame, the man is walking away from a team he just coached to a 34-6 record over the past three seasons. Don't think roses will lay down at the feet of Brian Kelly just yet, many in Cincinnati are very unhappy including senior star wide receiver Mardy Gilyard. The vocal Gilyard has already voiced his unhappiness with Kelly and more than once referred to his taking the "Notre Dame money," when describing his departure. Sorry Mardy, and the people of Cincinnati, the Irish still have clout in big time college football and just proved it. Some programs choose head coaches, others get chosen. Keep It Real!

Hey Lane! Had enough yet? Where there is smoke, there is fire. I'm sure the saying goes like that, and when it comes to Tennessee head football coach, Lane Kiffin, he better tread lightly. While Lane insists he and his staff have no involvement in alleged mishandling of recruiting, NCAA investigations into the program cannot be a good sign. The newest allegations include

boosters, but there have been plenty of others, calling out coaches, players getting arrested for attempted robbery, several inquiries into recruiting issues, got enough smoke yet? No coach in college football has been involved in as much non-on the field football based news than Lane Kiffin, and he's in just his first season. Headed to the Atlanta to play in the Chick-fil-A Bowl against Virginia Tech, Lane Kiffin and the Tennessee program have questions to answer, but my simple question is: At what point do you just shut up? These coaches you coach against Lane, they've done it all. Nick Saban - National Champion, Urban Meyer - National Champion, Les Miles - National Champion, Steve Spurrier - National Champion, and you? Fired from the Raiders? Finishing 7-5 may be an accomplishment for some programs, and you get some credit, but I wouldn't mind if we just didn't hear about the Volunteer program for a while, or at least heard about them in a positive manner. Lane, shut up and coach! Keep It Real!

That is no way to defend a championship Pittsburgh! Losers of five straight, the last two against Oakland & Cleveland, the Steelers are about to leave their title defense out of the postseason. That team who beat Minnesota & Denver in back to back weeks must have left the building, because we haven't seen them in over a month. Going forward, what's left? Games against Green Bay, Baltimoe, 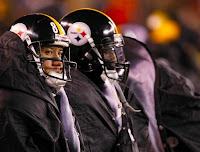 & in Miami? Each of those teams will still be playing for playoff hopes, and Pittsburgh gives no proof they can beat them. A defense that seems to be unable to overcome an injury to standout safety Troy Polamalu, and a team that continues to come out flat hoping to get turnovers, again . .Aren't they supposed to be defending champions? While Rashard Mendenhall seems to be an answer in the backfield, the Steeler ground game has looked anything but impressive. While not the Steeler way, losing out could be the best possible thing for them. No? Folks, if this team can work their way into a C.J. Spiller in the draft, LOOK OUT! All this being said, the 'fat lady' may be humming, but she hasn't sung yet. The Steelers still have a shot to make some noise and would be a dangerous team in the postseason. If I ever were to call out Pittsburgh, I know they'd win three straight and get help from an overachieving Broncos team which they still hold the tiebreaker over. Keep It Real! The Steelers Aren't Done!

Check out updates on Twitter and also Audio Lynchy!
Posted by Lynchy at Friday, December 11, 2009