Before We Slam The Door

Go ahead, move onto 2010 if you'd like. Not me however, I'm staying in '09 for a few more hours. Surprising I know, considering this is the year that gave us the New York Yankees, Pittsburgh Steelers, and L.A. Lakers winning titles, what's next, the Russians dominate the Olympics? 2009 certainly won't go quiet into the night; These are the 10 Things To Remember from '09: The Year Darth Vader Won.

10. Order Restored. You can bet all blowhard Yankee fans have said this at one point in 2009. Not since 2000 had baseball's most storied franchise brought a championship back to The Bronx. Players like

Randy Johnson had come and gone with their big money contracts looking to add a World Series ring to their resume yet failed. Finally, before we blew out the candles on this decade, the Yankees finished exactly where they started: at the top. In an offseason which saw New York get back to basics and sink more than $180 million dollars into three top prize free agents, (Mark Teixeira, C.C. Sabathia, and A.J. Burnett), their high hopes would finally be answered. A 103-win season capped off by their 27th World Championship.

9. Caught, Oops! From Michael Phelps (yes I checked if that was this year) caught smoking marijuana from a bong on film, to Tiger Woods and the affairs we've heard about, 2009 made sure athletes get no pass. Could we find two bigger sports stars? The Olympian of these United States responsible for the greatest achievement in the billion year old games and Tiger Woods, the savior of a dying game. However, in 2009 we've realized that 8-gold medals in one games and 14 major championships in a young career just doesn't buy you the kind of protection one thought. No matter how giant the athlete/celebrity, they're still human. World, Tiger Woods slept around and Michael Phelps got a picture of him taken while he took a bong rip, please stop acting surprised.

8. I didn't vote for Serena. It isn't because of Serena Williams' attack on a line judge that I would slight her for Female Athlete of the Year. It is however because both female horses (not humans) Zenyatta

and Rachel Alexandra were flat out better. From the wire, Rachel Alexandra stood alone beating an entire male field in the Preakness Stakes, becoming the first female horse to ever do so. She wouldn't stop at that, going 8-0 in 2009 and capping off the year with a win at the Woodward Stakes. Zenyatta on the other hand, she only dropped every older male horse in the Breeder's Cup by coming from behind to stun the horse racing world and complete a 5-0 season. A horse racing year dominated by the females, they should get their due for Female Athlete(s) of the Year. Much respect.

7. He's Baaaack. I still find it crazy that once the most prolific player in the game of football, Michael Vick, was sentenced to prison time for operating and funding a dog fighting ring. But that was a couple years ago, after serving his time Michael Vick did what everyone thought wasn't possible, returned. The story isn't how Vick played on the field, because we didn't see too much of that. However, after signing with the Philadelphia Eagles and being given a second chance on life, I must applaud the Eagles franchise. Without fear of losing fan support, protesters, or just downright negative press, the Eagles weathered the storm and now look poised to make a deep playoff run. Wouldn't 2010 start off right with Michael Vick kissing the Lombardi Trophy? That's why we love second chances.

6. Favred. I'm beginning to think he just likes the attention. Easily the most beloved player in the NFL, Brett Favre made everyone sit around and wait, listen to the hours and hours of speculation on whether

or not he would return from retirement and be under center yet again. Surprise! He came back. A retirement that would make both George Foreman and Michael Jordan jealous, Brett Favre is currently a Minnesota Viking and headed to the postseason. What makes this story most interesting, is the jersey he's wearing. It was one thing when he was playing in The Big Apple, that's about as far removed from Green Bay, Wisconsin as one can get, but to play in Minnesota? Well that's just low. The famed Packer legend completed his full circle comeback by dropping 'The Pack' not once but twice this season, including in Lambeau. This story won't end in 2009, if the Packers and Vikings meet again in the playoffs, I'm sure you and I will be watching.

5. Bye-Bye Charlie Why does no one else realize that Notre Dame just isn't that sexy? Well this fall, it got a whole lot worse. After rumours of Charlie Weis firing began even before the season started, the way his Irish played post-Week 8 and stumbling to a 6-6 record by losing their 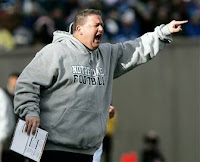 final four games, Weis was out. Charlie had a very average stay at Notre Dame, reached a few BCS games with someone elses players, had a terrible season going 3-9 in '07, followed by a final two years of 7-6 and 6-6, game over. Unfortunately for the Irish, they're starting over. On second thought, let's give Charlie some credit. He will have developed two top 10 NFL Draft quarterbacks, Brady Quinn several years ago and this year Jimmy Clausen. His offense was a top ten offense this year, and that was what he was known for coming in. Then again, when you come in preaching championships and the only thing you win is a laugher against Washington State, you don't get much love from me. Bye-Bye Charlie!

4. The 'roids, the 'roids, 'the roids . . Alex Rodriguez, Manny Ramirez, and David Ortiz all in one way or another suspected if not found to use or have used performance enhancing drugs. It's tough to think baseball is totally clean, you'd be foolish to. On the other hand, who cares? Alex Rodriguez and David Ortiz apparently both appear on a 'list' that no one has ever seen. Manny Ramirez was actually suspended this season for failing a drug test, but I just don't care. Why should I? It's baseball, the past twenty-plus years are steroid'ed up and we know that. On the other hand, there is a handful of World Series Championships that seem to be a bit tainted by these sluggers. Including the most recent 2009 World Series which has more than one player(s) who were at one time accused of taking some sort of performance enhancing drug. It's about time we move on from this and continue to roll our eyes. Daily News, that means you.

3. The Year of Pacquiao We may not show the respect, but they sure do in his native land. The Philippines own Manny Pacquiao has become boxings biggest star and in doing so fired up a sport that was 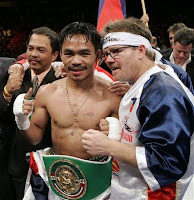 once considered dying if not dead already. Pacquiao started out the year by dropping England's Ricky Hatton in dramatic fashion, a second round knockout. Consider it the awakening by the American media, but this was the second fight in less than six months (including his December '08 beatdown of legend Oscar De La Hoya) that Pacquiao put on a show. Then again in November, Pacquiao came out again on a national stage and beat up Miguel Cotto to prove the point: He is boxing. Now with 2010 and the possibility of him fighting the captivating Floyd Mayweather, the run continues. Manny Pacquiao is possibly as good as it gets not just in boxing, in professional sports.

2. Kobe Isn't Michael, He's Kobe. In 2008 Kobe Bryant learned he couldn't win a title on his own, Kevin Garnett, Ray Allen, and Paul Pierce taught him that. In 2009, 'Bean flat out took the NBA title to wrap that 4th and elusive SHAQless ring around his finger. In the '09 Finals, Kobe averaged 32.4 points, 7.4 assists, and 5.6 boards a game. Why is this so important? Because historically, Kobe Bryant will go down as one of the greatest NBA players of all time, but now he's got a SHAQless ring to prove it. He handled the finals with ease playing nearly 44 minutes a game and giving the Magic absolutely too much to handle. As early as this season, you can see the results of how far Kobe Bryant has come. Not only is he the ultimate team player, but the players around him believe that. For a young man that has experienced the full gambit of the NBA, he's leaving his mark on the game right now in his 13th year in the league.

1. Cardinals WR Larry Fitzgerald, The Evolution Of. The Steelers may have won the '09 Super Bowl in dramatic fashion (Santonio Holmes toe stopper). However I'm still in awe of the play of

one Larry Fitzgerald, Arizona Cardinals game chaging wideout. Not only did Fitzgerald transform into the best receiver in the game, but his four playoff games are stuff legends are made of. Fitzgerald grabbed 30 balls for 546 yards and got in the endzone seven time including one 64 yard touchdown reception on the biggest stage. Why is all this important? Because, in a game which is routinely called a defense and run the ball game, a reciever laid the ground work for all other postseason runs. Larry Fitzgerald became the games best and you could argue changed the face of the playoffs going forward.