Georgia Tech (10-2) v. Clemson (8-4) Why: The winner advances to the Orange Bowl on January 5th as the ACC Champion.How: The 10th ranked Georgia Tech Yellow Jackets slipped up this past

weekend losing to in-state rival Georgia to complete their regular season. One of the few black marks on a 2009 resume that includes 8 games of 30+ points and wins in Starkville and Tallahassee. Who: Clemson running back and Heisman Trophy candidate, C.J. Spiller. In their first meeting, a Yellow Jacket win at Bobby Dodd, the Clemson senior went for 234 all purpose yards including 84 on the ground. After being named the 2009 ACC Player of the Year, Spiller will make his final Heisman statement this weekend. What: This game will leave us wishing Frank Beamer and the Hokies were somehow involved. Georgia Tech 33 Clemson 30

Cincinnati (11-0) v. Pittsburgh (9-2) Why: As if you needed another reason than to watch Cincinnati quarterback Tony Pike lead an explosive offense on a national stage. Who: Bearcats head coach 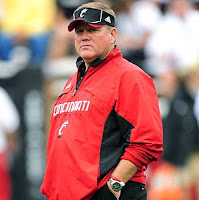 Brian Kelly is the 'it' coach in college football. Leading his Bearcat squad to an 11-0 season with fading hopes of playing for a National Championship. All eyes (specifically Irish eyes) will be directly focused on Kelly, the suspected next head coach of Notre Dame. A 32-6 record while in Cincinnati, which includes an Orange Bowl appearance, Kelly is a proven college football success. How: A BCS bid for the regular season winner of the Big East conference. Schedulers got this one right, both the Bearcats and Panthers have had incredible seasons which place both of them among the Top 15 in college football. What: Before their dismantling of Illinois last weekend, the Bearcats had eeked out two wins in recent weeks, has Kelly become a distraction? The Pitt Panthers crash the BCS party. Pittsburgh 27 Cincinnati 24

Nebraska (9-3) v. Texas (12-0) Why: No team has been on cruise control quite like Texas has. After their 16-13 victory over Oklahoma in the Red River Shootout, the Longhorns have simply been waiting for the

National Championship, this weekend they punch their ticket. How: There were reasons for Longhorn quarterback Colt McCoy to return to the college ranks, a Heisman Trophy & a National Championship. Both are in his sights. Eight games of 40 points or more, including games in Stillwater and College Station, the Longhorns are primed. Who: Nebraska defensive tackle, Ndamukong Suh. You don't have to know how to pronounce it, just watch this massive 6'4", 300 lb. tackle mash up interior lineman en route to the quarterback. Suh has the ability to put enough pressure on McCoy to force him into mistakes, something few have been able to do throughout McCoy's career at Texas. His explosiveness is described in these words, scary, phenominal, unstoppable, need more? What: McCoy & Suh may be the big names but the Longhorn defense may be the only thing bigger. 21 INT's on the season, passers beware. Texas 47 Nebraska 24

toughest conference, although both have come very close. Behind running back Mark Ingram, 'Bama has ran the table in the SEC, literally. Ingram has averaged 6.5 yards a clip en route to doubling his 2008 total in rushing yards. The 1,400-yard rusher will be in New York on December 12th looking to cap off his outstanding year, but has a date with the best defense in the country first. The Florida Gator defense has allowed just 233 total yards per game, led by senior linebacker Brandon Spikes. Who: Tim Tebow. Who else? Maybe I'm just like the 1,000,000 fans of the Florida signal caller, but Tebow is the ultimate difference maker. When discussing Tebow, you don't need stats all you need is to watch him play. In his final game at 'The Swamp' Tim Tebow gave the legions exactly what they wanted, vintage Tebow (5 Touchdowns, 3 passing, 2 rushing). Alabama is the only thing remaining in his path to his 3rd National Championship game in 4 years in Gainesville. What: Only one person in college football will be happy to see Tim Tebow graduate, 'Bama coach Nick Saban. Florida 27 Alabama 20

My preseason pick of Florida v. Texas is holding up. Rock Chalk!
Posted by Lynchy at Friday, December 04, 2009