Statement Made: To The Polls

Statement: [noun] a message that is stated or declared; a communication setting forth particulars or facts etc;

Away from Eugene, the 13th Oregon Ducks made a statement. In their first road game since their opening week loss to Boise State, the Ducks came out and put a 24-10 beating on UCLA in Pasadena. Another road test from Husky 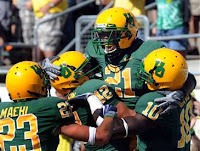 Stadium next week, while a Halloween matchup with the Trojans looms, Oregon has big steps to make very soon. Quarterback questions aside, the Ducks freshman back, LaMichael James, has shown how capable he is in the early going. Over the last four games, victories over Utah, Cal, and UCLA included, James has rushed for nearly 125 yards per game. In that same time span, the Ducks offense has soared. Outscoring three PAC-10 opponents, 118-19. Impressed yet? Their thumping of Cal, 42-3, is the most shocking, that Cal team was averaging 48 points per game before they flew to Eugene, since then they've scored 6 points. Ouch! This should serve notice to all of the PAC-10, these Ducks aren't flying south for the winter. Statement made.

The ACC is a one-team conference, statement made. That team is 4th ranked Virginia Tech. No?!? In two of the last three weeks the Hokies welcomed the ACC's best, Miami & Boston College. The result? Combined score of Hokes 79, Hurricanes & Eagles 21.

Satisfied now? Freshman running back, Ryan Williams, has burst into Blacksburg. In his first six starts, Williams has rushed for over 700 yards and recorded 9 rushing touchdowns. Frank Beamer's Virginia Tech machine continues to march on. Since 2005 Virginia Tech has the best record in the ACC, a statistic that is bound to continue. After a 10-point loss to a now ranked #2 Alabama team to open the season, the Hokies have knocked off two ranked teams, pushing themselves all the way to #4 in the AP poll. While an Orange Bowl bid may be the best thing their 2009 season will bring, Beamer's squad can send another impressive message to the ACC, no way is anyone supplanting them in the Atlantic Coast Conference anytime soon. Statement made.

The Big Ten is shook. The Hawkeyes of Iowa are scary. After a 21-10 beatdown of Penn State in Happy Valley two weeks ago, the Hawkeyes dropped the surprising Wolverines on Saturday night. Believe it or not, the Hawkeyes are ranked #11 and call their own shots in the Big Ten. The success of the Hawkeyes can be directly

linked to one thing, their defense. In their two big victories, at Penn State and Saturday against Michigan, the Hawkeye defense was dominant. Holding Penn State quarterback Daryll Clark to under 15 completions and forcing three interceptions. Stopping freshman sensation Tate Forcier and allowing him only eight completions for under 100 yards passing. An unbeaten Iowa team can control their own destiny but it won't be easy. Starting next week, road trips to Madison and Lansing will pose real tests for a team that has looked as tough as any in the Big Ten. Survive and the Hawkeyes will be staring into a November 14th matchup with Ohio State to play for the Big Ten championship, something we didn't expect a month ago, but they did. Statement made.

So much for the SEC having an off year. (1) Florida, (2) 'Bama. While the Longhorns went into the half trailing an unranked Colorado team in Austin, Nick

Saban and Urban Meyer were making statements of their own on the road. To the fans of the PAC-10, Big XII, and Big Ten, not so fast. After watching both the Gators in The Bayou and Crimson Tide 'Roll in Oxford, I'm impressed. Even more so impressed that the AP got it right and bumped the Longhorns while elevating 'Bama to #2. On Monday morning one thing is for sure, you want to see the real National Championship, tune into the SEC Championship two months from now, 'Bama v. Florida. Bank it. Things are just much tougher and much better in the South Eastern Conference. Statement made.

First up, Alabama. Did anyone really think that 'Ole Miss had a shot, even on their own turf? No. The undefeated Crimson Tide have been destroying teams as of late. Their first two SEC opponents, Kentucky & Arkansas, got shredded to the tune of 73-27. So when Alabama flew to Oxford, Mississippi was there really any doubt? A 22-3 beatdown, forcing Jevan Snead into a four interception performance, leaves no doubt. Statement made.

Next up, Florida. The top ranked team in the country had some questions heading into Louisiana. Would Tim Tebow play? If he did, how effective could he be? Florida 13 LSU 3, questions answered. Tim Tebow managed the Gator offense and Jeffery Demps put his fourth 80-yard rushing game on the board. The real tip of the cap goes to the Gator defense, who allowed LSU to convert on just 1 of 9 third downs. Any questions which remain about the Florida Gators attempts to repeart should be answered at this point. Period. Statement made.
Posted by Lynchy at Monday, October 12, 2009

Unfortuneatly, I'm stuck as a gator fan given the fact that one of my sons is a huricanes fan and the other a FSU fan. In any case its semms that based on performance to date that Florida would not be number 1 in the poles if it were not for their pre-season number 1 ranking. Texas and Alabama have played more consistently with solid wins all year.