The LCS Is Here

With the League Championship Series (Yanks v. Angels & Dodgers v. Phillies) upon us, some questions have fallen into my lap. With 3 of the 4 teams eliminated by brooms in the first round of the MLB playoffs, hopefully things are about to get a tad more interesting . . .

Question 1: Which remaining team has the starting pitching advantage?

It's tough to argue against the Angels starters after their divisional series performance. In game 1, John Lackey went seven and a third allowing just four hits, no runs, and walking only one batter. In game 2, Jered Weaver turns in a brilliant performance, seven and a third, seven strikeouts, two hits, and only one run.

Despite that, I'm going to have to go with the New York Yankees and the combination of C.C. Sabathia, A.J. Burnett, and the veteran Andy Pettitte. As much as it pains me to do say it, the Yanks are playing very, very, good. The veteran Pettitte had to make it through just six innings before turning it over to a quality bullpen, in those six, he was fantastic (7 K's, 3 hits). Ignore A.J. Burnett for now, he can get through innings and strikeout hitters, but he puts far to many men on base, I would contemplate Pettitte as the game 2 starter. The real reason I like the Yanks' starters, C.C. Sabathia. The Twins came into the ALDS on the biggest of emotional high a team could be on, coming off the best win they've had since the days of Kirby Puckett. What does Sabathia do? Pitches six and two thirds, fans eight batters, and allows just one earned run. Despite a rough first inning, Sabathia settled down and pinned up the Yanks first win of the post season. At this point, Sabathia is playing with as much confidence as anyone, the offense behind him protects him by putting runs on the board and that gives C.C. what he needs to shut down teams. (I may be placing a reverse jinx on the Yanks, beware.)

Question 2: Is there any validity to the 'team of destiny' label on the Los Angeles Angels of Anaheim?

The unfortunate death of rookie pitcher Nick Adenhart could have derailed the Angels and 2009, it's doing the opposite! The fans, the franchise, the players, everyone is in it with a huge amount of heart. This is the story that is meant for the silver screen, the way these guys are playing and what they are playing for, it's mythical. The most impressive thing they've done thus far, prove they can play with the American Leagues top teams. Beating the Red Sox as they did is impressive and should send shock waves all the way to the Bronx. Their bullpen didn't look bad, the players were moving on the basepaths as they always do, and all that included, they are playing for something bigger. If the Angels aren't a 'team of destiny', I don't know who is.

If your a Phillies fan, which I'm not, then you have to hope so. The Philadelphia lefty had one of the best postseasons of any pitcher over the past fifteen years in 2008. Over (5) starts, Hamels dominated hitters with a mind boggling 1.80 era and helped bring a World Series Championship back to The City of Brotherly Love. 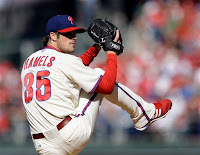 However, in his last start of the regular season and first start of the postseason, he's looked very average. Two starts, two Phillies losses, only eight innings pitched, and seven earned runs allowed. What do I think? I think Cole Hamels is made of the same fabric as Josh Beckett, when it's on the line you can give him the ball. Hamels laid down a history book performance in 2008, there is no reason to think he'll drop off the map in this years playoffs. One more bite for you, in his two starts against the Dodgers this season, Hamels has been flat out dominate to the tune of a 0.56 era over 16 innings pitched and only a single earned run allowed. With that being said, the Phillies acquired Cliff Lee, last years A.L. Cy Young, as insurance. Lee & Hamels are a dangerous pair if they are both on.

Question 4: Dodgers in Chavez Ravine or Yanks in The Bronx, who has the greater home field advantage?

Both teams with homefield advantage in the league championship series pose very, very different atmospheres. As cold weather moves its way into the northeast, southern California is still shining bright. Both teams, the Yankees & Dodgers, dominated opponents at their home digs. In their first year in 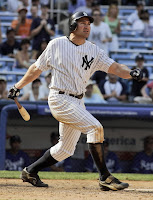 Yankee Stadium II, the 'Bronx Bombers' posted the most home wins (57) among major league ballclubs. As for Joe Torre's Dodgers, they gave Dodger fans (50) home wins, good for second most in the National League. I could stretch this out a little longer and tell you playing in warm weather is a huge advantage for the Dodgers, and by the time they get to Philly, it'll be icy. However, none of that compares to the advantage the Yanks have acquired. In more than 130 less at bats in The Bronx, the Yankees offense hit 28 more homers. Eight hitters had more than 15 homers on the season, attest that to the home field advantage they have. The best example would be that of 35-year old outfielder, Johnny Damon. 17 homers within his own confines, and only 7 outside. While Chavez Ravine has a better crowd who demands less, warmer weather, and in Southern California, no advantage is like that of the Yanks.

Question 5: Which one player will have the single biggest impact on his team?

No hesitation. Angels center fielder, Torii Hunter. It would be all to easy to pick the most dominant pitcher remaining, maybe even look for a lock down closer like Mariano. However, I firmly believe Torii Hunter is the one thing recent Angel teams have

been missing. Humour me for a moment, please. Hunter is in the midst of a career year. In 100 less at bats than a year ago, Hunter has driven in 12 more runs. More so, he's the heart and soul of this Angel team. The moment for me? When Hunter slammed his game 1 homer off Jon Lester to send a message to the American League, these aren't the same Angels. Hunter gives the Angels more energy, an edge, and a whole lot of heart they've been missing. A near .300 hitter in the regular season, 20+ dingers, and 90 RBI, Hunter is the tough veteran they've been missing. Stick him in a lineup that includes veterans Vladimir Guerrero, Bobby Abreau, and of course the 26-year old sensation that is Kendry Morales (34 HR's, 108 RBI, and a .306 BA) these Angels are as good as they've ever been. Torii Hunter brings this team exactly what Nick Swisher brings the Yankees, but he does it with far more production, that's why Torii Hunter is the single biggest impact player remaining in the postseason.

Catch me on TWITTER! Catch us on the PODCAST! Thanks for reading!
Posted by Lynchy at Wednesday, October 14, 2009