Let's bang out Keep It Real Friday! It's going to help you at the water cooler. It's going to get you through a friday 8:00 AM class, for any of you collegiate type that is crazy enough to do that. Click on the link to the right and this one, to direct you to the podcast page!

I stand corrected, Derek Jeter is NOT the American League M.V.P. We're all so quick to recognize the Yankee shortstop for what he is, an iconic, legendary player. In a year where Jeter has been both game changing and consistent, everyone, including myself, was ready to hand him the A.L. Most Valuable Player, and we were wrong. Last week, when I laid claim to Jeter as the newest

Yankee to win the award on TheRightNowPodcast I had yet to view the mind blowing stats which Twins catcher, Joe Mauer, put on the board this season. In 2009, Joe Mauer missed 24 games, and still recorded a career season in RBI(96), homers(28), and batting average (.365). While I'll try not to take anything away from the 35-year old Derek Jeter, this season was not his best in any of those categories. Mauer hits in a lineup with significantly less protection than Jeter's Yanks offer. I can't stress the importance of that .365 batting average, an average .013 better than the second place Ichiro, an average .031 better than the third place Jeter. After missing the entire first month of this season due to injury, Joe Mauer came back to have a career year. If we're talking valuable, no player was more valuable to the success of his team than Twins catcher, Joe Mauer. I wanted to give this to the veteran Jeter, but it's just not him, not him at all. Hats off to Joe Mauer and the Minnesota Twins. KEEP IT REAL!

Urban, just do the right thing. We don't need doctors to clear Tim Tebow to play on Saturday night in Baton Rouge, the kid obviously needs a little more time. Holding Tim Tebow out is the clear way to go here, (1) The Heisman Trophy winning quarterback shouldn't even have been in the game when he got knocked out, the Gators were up big and he was dropping back to pass, that's on you Urban. (2) The game doesn't mean as much to the Gators, they can lose and still reach the national championship by winning the SEC

and that's all you need to worry about, staying undefeated isn't worth it at this expense. And (3) If you let those Tigers get at him, I'll feel about as bad for you as I felt for Roy Horn (Siegfried & Roy) If there is anything we've learned from the Les Miles' Bayou Bengals, they come to play, they are fast, they hit hard, and you can bet they won't "take it easy on Tebow." If Tim Tebow were to suffer another concussion, it'd be very bad for everyone and most of all Tim. Nearly two weeks later and no doctor has given him the "O.K." so clearly something is wrong here. Tebow never remembered the hit, still doesn't. He looked more dazed than me after a chemistry test in high school. Keep him on the sideline and take this one slowly, do the right thing Urban. KEEP IT REAL!

Ooops, Sorry Los Angeles. Maybe we should have had a little more respect for the Dodgers, they did have the best record in Quadruple A, (National League). After two playoff victories, on their home turf, the Dodgers are headed to St. Louis with a commanding lead. With the Cardinals sending Chris Carpenter (17 Wins) & Adam Wainwright (19 Wins), everyone put the Cardinals in the drivers seat in the NL Playoffs. Two aces pitching on the 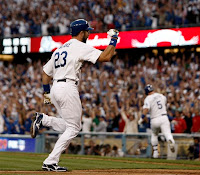 road against a team which limped into the postseason after a less than honorable second half of the season. After a 5-3 loss in game 1, highlighted by a Matt Kemp homerun, the Dodgers had a 1 game lead on everyones favorite playoff pick. Up 2-1 heading into the final half of the 9th, closer Ryan Franklin on the hill, and the Cardinals let up a lead and the win, oops. The Cards are in trouble. With that being said, let's go DODGERS! If the Phillies can hold off the Wild Card Rockies, another Dodgers v. Phillies NLCS would be filled with stars. Former Red Sox mates, Pedro Martinez and Manny Ramirez would square off. Joe Torre welcoming the Phillies and their World Series MVP, Cole Hamels. 2-0 isn't something the Cardinals can't comeback from, but my money is on the Dodgers to close this out in St. Louis, if that means anything. Dodgers are better than expected, KEEP IT REAL!

I defend The Brady Rule, so Baltimore, calm down. After the season ending injury to Tom Brady last season, the NFL made an effort to protect superstars of Brady's caliber. In other words, no lunging at the knees of quarterbacks. As a fan, I respect that. Do I want to watch 17 weeks of Jim Sorgi rather than Peyton Manning? NO! Do I want to watch 17 weeks of Mark Brunell rather than Drew Brees? NO! How about Chris Redman rather

than Matt Ryan? Finally, NO! So yes, they'll be protected a little bit more and yes that will result in some phantom calls from time to time, deal with it. In every sport the stars are protected, and that benefits everyone involved in the game. The NHL protects Kid Crosby and Alex Ovechkin, ask any hockey expert, there is a reason. For years we watched Michael Jordan get phantom calls and he was allowed to do more without getting called, why? He was the greatest athlete on the planet. Star treatment is a phrase for a reason, it's different than what the "other guys" get. Yes the rule is named after Tom Brady, because the NFL doesn't get anything out of 17 weeks of Matt Cassel, the Patriots didn't make the playoffs and ratings were most likely down. If Ray Lewis and the Baltimore defense wants to cry about it, we'll talk when Joe Flacco has the same injury, see what you REALLY think. Protect the stars, give me what I want to watch, KEEP IT REAL!

Did I really just make it through that with no Brett Favre talk? I did. Thank you for reading Keep It Real Friday! Make sure to check out the newest podcast from TheRightNowPodcast! Available on iTunes, search RightNowPodcast.
Posted by Lynchy at Friday, October 09, 2009