"Just when I thought I was out, they pull me back in" - Michael Corleone

I was watching Carl Crawford steal six bags in one game, I saw Jacoby Ellsbury nab home plate, maybe the steroid era was over? Maybe after watching the greatest players of our generation, Barry Bonds, Alex Rodriguez, and Roger Clemens, have their legacies tarnished, personal life shattered, and character questioned, maybe everyone got the message. At least maybe the stars got it, maybe the guys who were destined for Cooperstown got the message, you can be remembered as one of the greats or you can be remembered as one of the cheats, easy decision right? Wrong.

We haven't fully grasped the suspension of Manny Ramirez. So, in true LynchyRightNow fashion, I'm going to help us all out:

This suspension stretches coast to coast, it's the nature of the beast. It isn't just the fans of L.A. who should be irate, the fans of Boston have to have some anger in them. For a city who waited 80+ years to win a World Series, and had the fortune of winning two in four years, we've got to be pissed off that those years could be rightfully tarnished in some way. Ramirez was the 2004

World Series MVP, now it may take 25 guys working together to win the series, but you could argue without Ramirez it wouldn't have turned out the same. I'm not going to convict Manny of using during those years, but others will and the questions will be posed. The true blue Dodger fans must feel duped, they were going to Chavez Ravine long before "Mannywood," and now everything they accomplished in 2008 and going forward will have that dark steroid cloud lingering over head. Manny played an important role in putting Boston baseball back on the map, not since Fernandomania had baseball been as relevant on the left coast, now clouds linger over both of the storied franchises.

Manny isn't the first, won't be the last. The suspension of Manny Ramirez won't be the last we hear from the steroid chronicles, bank on it. 100 more names still lay in the weeds from the same list that one Alex Rodriguez was outed from. Manny however, may be the straw that breaks the camels back. What I'm getting 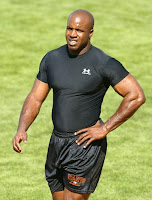 at is, now that we see Ramirez on (*) era, can't we all agree that this era in baseball will forever be linked to one thing, steroids. Maybe we all do, and maybe I'm not being clear: The steroid era is what the RICO laws were to the mob. If anyone your associated with is found guilty of doing anything, even if your not involved, your guilty. Maybe your favorite player is David Ortiz or Greg Maddux, while never found guilty, they excelled in "The Steroid Era," put them in the HOF, but they're still linked to this era no matter what. What can you do? We don't know of everyone who used and we don't know who definitely didn't, so if you played in the era which we'll earmark, then that's how the cookie crumbles. Otherwise expect the list to grow and grow and expect years to pass before some people are let in the hall of fame, whether they should be or not.

Surprise! Alex isn't alone. As much as the A-Rod haters want to pin steroids to the greatest slugger since . . well Barry I guess, many more will join his ranks before all is said and done. You have the right to not cheer for him, you 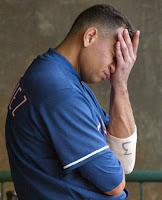 have the right to call him a cheater, but I hope you pay players like the beloved Manny Ramirez the same jeers, he's earned it now if he hadn't already. Let's bang on Manny some more, let's bang on his legacy of not running out ground balls, refusing to play for his teammates, kicking and screaming his way out of a city, shoving aging clubhouse attendants, need more? What?!!? Too much? NOT ENOUGH. Which one of those things is worse than allowing your opponent to drill a 3-0 fastball by telling him it's coming in the midst of a blowout game? ALL OF THEM ARE WORSE. Alex may not be a "great guy," and he may not be a role model for millions, he's probably very self involved, but what separates him from Manny Ramirez? Nothing now. I hope we attack Ramirez in the same vindictive way we've chosen to bang on Alex, equal rights.

What's being Manny? Manny? If what is rumored comes true, it's safe to say Manny is smarter than your average bear, or at least he's duped us all into thinking he's just a hitting savant. Manny may have been doing in private what Victor Conti needed professional doping labs to do. The drugs he used, were on some level 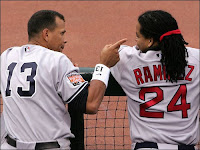 fertility drugs used to stabilize testosterone levels after coming off a steroid cycle. Some even say those were the same type of drugs used for Jason Giambi and Barry Bonds during their years working with the BALCO Laboratories. So your telling me this isn't a new phenomenon? Exactly. Manny and probably countless others are flying under the radar with different type of PED's, the drugs are advancing with technology, the skill it takes to evade testers is improving, and if there is a way to cheat and succeed, players will look for it. So no, take off your rose colored lenses and realize, Manny is smarter than you think, he shoulders all of this blame for his actions, and yea I'm a little shocked by that too.

The silver lining. There is a silver lining in this situation, hear me out. As long as current Red Sox outfielder, Jason Bay, never gets found guilty of using performance enhancing drugs, here is a guy we can root for. The first thing out o

f Red Sox fans mouths was "he isn't Manny though", and they were exactly right. Through 29 games, Jason Bay has played in every last one, at this point Manny would have needed at least two or three days off. Jason Bay has clubbed a team leading 8 homers through the month of April into May. Ramirez has 6, in the National League. Manny has knocked in 20 baserunners, our Canadian outfielder has drove in 29 including 8 multiple RBI nights. In the off-the field distraction department, Ramirez is taking the cake, while Jason Bay got four RBI's last night. So what if we thought trading away a future hall of famer for the star player on the Pirates wasn't smart, turns out the ownership group and front office of our franchise in Boston may have a leg or two up on some other franchises. Let's get on the back of Jason Bay and root for a new breed of ballplayer.

Finally, I want to say I like the way the game is being played. It sucks that we have to have the steroid conversation over and over again, but it might just be part of the times we're living in, part of the fabric of the game we've witnessed. I'm through with Manny being Manny, unfortunately baseball being baseball has just begun
Posted by Lynchy at Friday, May 08, 2009