In an effort to get people excited about the 2009 Belmont Stakes and also the conference finals matchups without the Celtics, I've added a little twist to our NBA Conference Finals Preview. Take off your hiking shoes and strap on your horse shoes, we're getting after it. 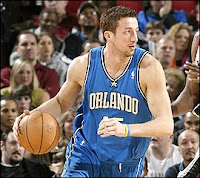 call King. The Orlando Magic romp the defending champs in a decisive game 7 only to meet the Cleveland Cavaliers, the 8-0 thus far in the postseason Cleveland Cavaliers. The Magic may have the most physical big man in the league, but their offense doesn't run through him enough for Orlando to have a shot. I've said this before and I'll say it again, with the amount of 3-pointers that Orlando shoots it acts as both their gift and their curse. If your not hitting they become long rebounds, taking that same most dominant big man Dwight Howard directly out of position and in turn transition. KEY: For the Magic to grab a game or two, eight-year veteran Hedo Turkoglu has to have more games like his game seven performance (25 points, 12 assists).

The Denver Nuggets a.k.a. Smarty Jones, '04 Derby and Preakness winner. The headline ran on Sports Illustrated, "The horse from the wrong side of the tracks, looks fit for a triple crown." Find a headline that better fits the Nuggets? 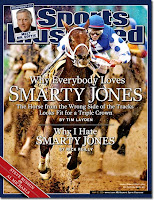 Perennial outs become the team everyone wants to win. Like Jones in '04, Denver looks to do something special but not a triple crown just knocking off the defending Western Conference champs and spoiling our hopes of seeing LeBron v. Kobe, right? Led by their prize fighter, veteran ace in the hole Chauncey Billups, Denver might just have what they need to do it. The Lakers are soft, don't argue. The Nuggets have bangers, Kenyon and Nene. The Nuggets have leadership, the previously mentioned. A bench, J.R. Smith averaging 16 off the pine in the playoffs. Oh, and Carmelo Anthony having a postseason of 27 points a night. Seems to me with this type of cast they have what it takes to be what Smarty Jones was, a champ. KEY: Drop the Lakers and stay on them, Chris Anderson and J.R. Smith can dominate the Lakers bench with both energy and scoring, tread lightly L.A.

The Cleveland Cavaliers a.k.a. Big Brown, 2008 Derby and Preakness winner. The most feared horse since Michael. Like Big Brown, LeBron and the Cavaliers passed their pre-test and first two legs of their championship. The regular season champs ran through Detroit and Atlanta like Brown ran through 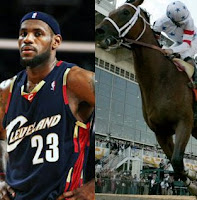 Churchill and Pimlico. When Big Brown was looking like a slam dunk for the Triple Crown, he looked unbeatable and that is exactly how LeBron and the Cavaliers have looked thus far. Eight wins by an average of 15 points per game, LeBron is scoring 32 points a contest, and flat out no one could look better than these guys. Without the mystique of the Celtics and without having to play one game in Title Town, ask yourself if Cleveland will show any type of vulnerability against the likes of Orlando and Dwight Howard. You know that look that Michael got, that look that said "no one is stopping me, no one is holding me down" that is seeing red and that is what LeBron has right now. Excellent guard play from Delonte West and Mo Williams should give LeBron what he needs and the key? KEY: No let down, as long as the Cavaliers crush the Magic spirit in the first two games in Cleveland they'll avoid a similar Big Brown like finish.

The Los Angeles Lakers a.k.a. Rachel Alexandra, 2009 Kentucky Oaks and Preakness winner. She could be the most dominant horse in ages, being the first filly to win the Preakness in 85 years, but has she spent herself? The race in Pimlico

is her title and the Belmont may be her downfall? Could Kobe and the Lakers actually win the title? More importantly, are the Lakers going to take a stand at some point here? 40-point victories followed up by road losses, an inability to get physical down low, are the Lakers walking into a buzz saw in Denver? As much as we'd like to see Kobe v. LeBron for a Championship, much like we want to see Mine That Bird ('09 Derby) v. Rachel Alexandra ('09 Preakness), will the real horses arrive in the final leg? Is the next race too long for the Lakers? Do they allow Denver to push them to brink? Does the selfish Kobe come back when the Lakers go down 1-0? L.A. has the opportunity to reassert themselves as the most feared in the West, or they could be back at home with Phil and Kobe another year older. KEY: Much like Rachel Alexandra, they have what it takes to win this leg, but will they get there healthy enough with gas still left in the tank? Pau & Lamar have to take charge right now.

You'll get your Belmont Stakes Preview but let me wear these high tops for a little while longer while I pray for Kobe v. LeBron. The Coronation.
Posted by Lynchy at Tuesday, May 19, 2009