After devoting an entire Saturday morning column to the NHL Playoffs, I've decided to give our basketball fans a taste. We've got the five best questions from you the readers to LynchyRightNow, I'm all about giving the fans what they want!

Let us get after it.

SIDENOTE: If you were looking for some talk on whose winning golf trophies, soccer trophies, and or baseball trophies . . . not just yet.

Do Yao and Artest have enough to push the Lakers to the brink?
- Eric, Houston

No, next question. Alright I'll give you a tad more than that. It really is an amazing thing what the Rockets are doing in the absence of Tracy McGrady. Their offense seems to have opened up and Yao is playing the way a 7'6" center should. In

game 1 of their best of seven, Yao scored 28 points and pulled down 9 defensive boards, taking away 9 second shot opportunities for the Lakers. Both Ron Artest and Shane Battier want to play the role of Kobe stopper, and more importantly both seem to frustrate the superstar. The Rockets may have exposed how to beat the Lakers in game 1, however beating them once and beating them four times are completely different things. The Lakers lose when the disparity in scoring shines its ugly head, Kobe 32 points next highest scorer 14 points. With all that said, the Rockets won an 8-point game while the Lakers shot 2-18 from behind the arc. Their bench doesn't give as much help as you'd like and the Lakers are too deep. Ariza and Fisher will have their games and we'll see how the Rockets respond. Keep in mind the Rockets were 0-4 against Los Angeles in the regular season.

Forget not having Garnett and Powe, forget being exhausted after their 7-game slugfest, what is the Celtics answer for Dwight Howard?
-Mark, Tampa Bay

In my not so humble opinion, the Celtics are just better than Orlando. Orlando shoots way to many three-pointers for a team that has the most dominating big man in the league roaming the paint. If there is only one thing, other than exhaustion, which came out of that Chicago series it was the confidence that Big Baby 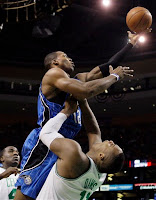 Glen Davis got. Perkins can hold his own against Dwight Howard (16 boards, 3 blocks) it's Davis that will have to continue his 10-15 point contribution if the Celtics want to continue their title defense. Back to the 3-pointers with Orlando, they were 9 of 27 from behind the arc in game 1 while the starters were only 5 of 19 from behind that same arc. Three-point shots that don't go in cause long rebounds, the type of rebounds that Rajon Rondo and Ray Allen are capable of tracking down, the same boards that leave Howard too deep inside to get those boards. If your running the Magic offense, how excited are you that your guards shoot too much and it takes away from the best part of your game, the seven foot animal known as Dwight Howard. The majority of Howard's boards come on the defensive end, that's a fact. To go full circle on this one, Glen Davis needs to hit that mid-range jumper he has seemed to own as of late. Perk needs to draw Howard slightly out of the paint and allow Ray and Paul to take as deep as they can. Let the Magic shoot, it plays into your game.

What does winning the MVP do for LeBron and the Cavaliers?
-Ray, Ann Arbor

At first I wasn't going to give this question the run, however it actually does do something. Lately I've really thought that LeBron gives his teammates way to much credit. It's one thing to be humble, but LeBron is constantly talking team, and 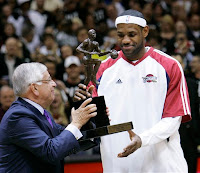 constantly giving props to everyone but himself. However, I admit I might have been wrong about King James. His teammates may not be built to make the deep postseason run, but LeBron is ready to win now and he knows the only way that can happen is if they get ready quick. All the credit he gives them is empowering to them, and their play is showing what he does is working. Mark my words, come the conference finals the Cavaliers will be 8-0 and will have had plenty of rest. A day after LeBron wins the MVP and on a day that is supposed to be about him he makes it about his teammates, how do they repay him? By dissecting the Atlanta Hawks one quarter at a time. LeBron could score 50 a night if he wanted, however him scoring 34 and guards Mo Williams and Delonte West chipping in a combined 34 really pull the Cavaliers championship run together. Make no bones about it; LeBron is ready to win now and so are the Cavs.

Not hearing much about Denver/Dallas, what gives?
-Cy, Sacramento

While both of these teams had impressive first rounds, Denver over New Orleans and Dallas over San Antonio, there were some things missing. How can we judge Denver when they played a squad in 'Nawlins that did everything but forget what time the game started. The entire team rolled over and palyed dead as the Nuggets steam 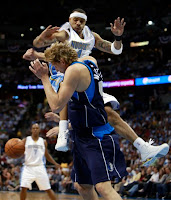 rolled them. As for Dallas, in the Spurs absence of Ginobli, it was clear they weren't the same team. The excellent play by both Josh Howard and Jason Terry allowed the Mavericks to handle the Spurs with ease for the most part. Neither of these teams played a team like Utah or an energy team like Portland that just got outplayed by Houston. But, but, but, but it doesn't mean this series won't be entertaining. Denver v. Dallas could be the most exciting of the second round series'. Chauncey Billups has given Denver what they never had, a strong playoff seasoned point guard who knows how to distribute. Speaking of playoff guards, you don't get more veteran than Dallas guard Jason Kidd. We talked about the play of both Howard and Terry, they'll have to continue if the Mavs look to bring down the #2 seed in the West. The Nuggets have alot of weapons and talent wise the Mavericks do match up, if all the games in Denver didn't start at 10:00 on the east coast, you'd know that too.

Of the teams remaining, which player still in the playoffs can make the most impact for his squad?
-Chris, Charlotte

Call me a homer, but it has to be Celtic power forward Glen Davis. Now starting in place of the injured Kevin Garnett and Leon Powe, Glen Davis has gone from averaging seven points and four boards in the regular season to a mind blowing 18 points and 8

boards a game in the postseason. I've watched more than enough Celtics basketball, post-Garnett injury, to realize that Davis is the x-factor. The attention given to Ray Allen on the perimeter should give Davis open looks which he has to hit. Rondo's ability to pull defenders into the paint leaves Davis open for that mid-range jumper we discussed. Dwight Howard banging with Kendrick Perkins will force Davis to make his layups and finish plays for the Celtic bigs. Davis has gone from playing 23 minutes pre-Garnett injury to close to 35 minutes post-Garnett injury, as impressive as that is we have to hope that his frame can keep his motor going. If Glen Davis doesn't play the way he is capable of the Celtics have small chance at advancing.

Thanks for reading, any questions feel free to e-mail me directly at nslynch@gmail.com
Posted by Lynchy at Tuesday, May 05, 2009