The Los Angeles Clippers have won the rights to the top overall pick in the 2009 NBA Draft, congratulations Clipper faithful (all three of you). As winners of the "Blake Griffin Sweepstakes," the Clips have the option of adding an All-American power forward who earned national player of the year honors this past season. A replacement for Elton Brand whom they lost in free agency last season, adding to a core that includes 2nd year guard Eric Gordon, and would now of course include the premier prospect in this draft class. Blake Griffin is a lock, right?

Since 2000, as many as four of the top overall picks have been busts. LeBron James is the king of basketball, Dwight Howard has transformed into Super Man, Derrick Rose is legit, and Kenyon Martin is no longer 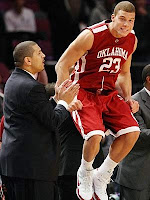 with the team that selected him. That still leaves Greg Oden, Andrea Bargnani, Andrew Bogut, and of course Kwame Brown. The Oklahoma power forward Blake Griffin is neither as imposing as Dwight Howard or a play making guard like Derrick Rose, so will he be joining the ranks of Bogut and Bargnani?

The rumours of this draft class being less than desirable aren't just rumours. At least 8 of the rumoured top 10 picks have questions and they're major questions. Hasheem Thabeet is a 7-2 shot blocker, so was Greg Oden. Stephen Curry lacks size and hasn't had time to develop into a true point guard. Brandon Jennings has been in Italy for the past year and scouts may not have a true example of the type of player he is. Demar DeRozen, Jordan Hill, and James Harden are all unpolished and won't be impact players for a couple years, can these teams wait? If Blake Griffin is 6-10, I'm 6-5 (and I'm not). Tyreke Evans has a small sample size and isn't as explosive as the current rookie of the year and fellow Memphis Tiger, Derrick Rose.

The Clippers don't exactly have luck at this spot. In 1998 the Clips selected Michael Olowokandi, exactly. Olowokandi was a seven footer who poured in just 12-points a game in his best NBA season and never recorded double digit rebounds per game in his entire career. Things you don't exactly appreciate from your #1 pick. That draft also didn't seem as deep looking back on it. While Blake Griffin tore up the ranks at his size last season, the NBA is a different game, going against other power forwards like fellow #1 pick Kenyon Martin may be difficult for the smaller Sooner. If your the Clippers you'd prefer what Miami got out of Mike Beasley in 2009 than what Mike Olowokandi ever gave you, that might be a better representation of what Griffin can do when it comes to immediate impact.

It isn't all just negativity here. Yes the Clippers did only win 19 games this season, but Al Thorton, Zach Randolph, Baron Davis, and rookie Eric Gordon the 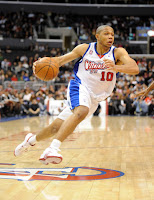 Clips have some pieces in place. When they add Blake Griffin they do become better than they were in 2009, and right away too. Griffin puts himself in great position for rebounds, something the Clips need help on. Griffin can bury the outside shot so he gives them that versatile look, and like Gordon and Thorton, he's young enough to give you a core three for at least a few years. The Clippers are in the best position this season, a weak draft class, the player with the least amount of questions. Your right, he is a lock.
Posted by Lynchy at Wednesday, May 20, 2009