Revolution Of The Point

He's already got Chris Paul's number, and after what he did in Phoenix this past weekend, against a two-time MVP, you can't ignore him. Fans of the NBA, meet the Celtics floor general, Rajon Rondo.

The former Kentucky Wildcat, Rajon Rondo, is tearing up the NBA, one point guard at a time. Since February 11th, the Celtic guard has averaged 17 points, 10 assists, and nearly 8 rebounds a game, filthy. Against the likes of Chris Paul,

Jason Kidd, Deron Williams, Steve Nash, and Chauncey Billups, it has been Rajon Rondo that has stood out the most. Triple double in Dallas, double-double in Phoenix, and had the C's not been up by 40 in the fourth quarter at Denver, I'm sure Rajon would have got two more boards and two more assists to give him his second triple-double in four games. It isn't just as of late, Rondo is currently 6th in the Eastern Conference in field goal percentage, and the leader among guards. The 2nd year guard in 2008, who was afraid to shoot anything that didn't resemble a lay-up, has been able to consistently penetrate and shoot when open, something he couldn't do a year ago.

Furthermore, for those who live and die by the Celtics, it is more than obvious that this team struggles the most when Rondo is on the bench. Neither Eddie House or Gabe Pruitt have been able to steadily maintain the Celtics offense when Rondo is not in 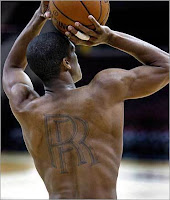 the game. A year ago we were saying this team needed to find a Sam Cassel like back-up point guard to keep them alive in the playoffs, is anyone upset they haven't found a playoff guard? They have one, his name is Rajon Rondo. Rondo has become the type of guard I've wanted the C's to have for years, he plays outstanding defense, see his two steals per game, good for 4th best overall in the league. Not to mention that each of his teammates are getting better looks than they've had in years, see Ray Allen and Kevin Garnett (and Rondo himself) are among the top 12 in field goal percentage in the Eastern Conference. Only Jason Kidd has more rebounds per game among NBA guards. Rondo's 5.3 boards a game, 4.0 on the defensive end, are stopping possessions on one end and giving more opportunities to his teammates around him on the other end.

Finally, it has become more than obvious that while Pierce, Garnett, and Allen are the All-Stars on this team, and the jerseys that you buy, however, Rajon Rondo is in charge of the wheel. When Kevin Garnett suffered that knee injury Thursday night and the Celtics lost the first game on their road trip, it was Rajon Rondo who stepped

up. Rondo had a mind boggling game against Phoenix, he made Steve Nash look old, and mad Alvin Gentry age three years. He was 13-18 from the floor, dished out 10 assists, and scored 32 points, making up for some of what the C's were missing without Garnett. Against Chauncey Billups and the Nuggets, Rondo played only 31 minutes, his lowest total over the last 10 games, and he still scored 14 points, had 8 assists, and got 8 boards. With games against Indiana, Detroit, Cleveland, Orlando, and Miami all on their upcoming schedule and Garnett on the shelf, it'll be Rajon Rondo who determines how this team heads into the final month of the season. Hats off to the Big 3, but Rondo is the 1 who makes this team tick.
Posted by Lynchy at Tuesday, February 24, 2009