I can't even lie, this is the week of the non-story. The NFL season has ended, because I don't count the Pro Bowl as even existing. I've already released my thoughts on the Lakers and Celtics, so aside from good entertainment, last nights game means very little. I refuse to comment on the fact that Manny Ramirez has yet to accept one of the Dodgers offers, both which would have paid in excess of $20 million dollars over the next 365 days, when the economic climate in America couldn't be worse. Wait, did I say I wouldn't comment? Scratch that, let's KEEP IT REAL!

Olympic Champion, Michael Phelps, got caught with his face in a bong. He apologized. That is where the story should end folks. He is a 23-year old guy, who in the span of months, became a global icon. If the only thing Michael Phelps is doing is smoking weed, then we should give him another medal. He isn't in a porn video, he isn't smoking crack, or injecting himself with heroin, he's smoking weed. Sure, maybe it isn't the best thing to portray to your fans, millions who are children, but maybe as journalists you could give this guy a break, if not for

National Collegiate Signing Day. This has to be the biggest non-story every year. I'm not going to point how morally wrong it is, how much it takes away from the point of both high school and college, and how utterly overblown it has become, no, I'll stay away from that. What I won't stay away from is how meaningless it really is. The same schools are in the top ten of recruiting classes every year, Texas, Southern Cal, Oklahoma, Florida, Georgia, LSU, and Notre Dame. You'll never see BYU, Boston College, or Middle Tennessee State boasting a top ten recruiting

class. Why is this an important point? Because if you want National Collegiate Signing Day to be important, it has to be important to more than just seven or eight selected programs and groups of fans. This isn't the NFL or NBA draft, these athletes won't make significant impacts (except for a select few) until they are at least two years into school. Why do we love the drafts? Because we see them play a major role or at the very least, somewhat of a role in the near future. The final judgement on these "signing classes" is reserved till four years from now, upon their graduation and subsequent declaration toward the NFL. In December 2009, I can guarantee not one of these young men who signed on the dotted line this week, will be in New York looking to hoist the Heisman Trophy. Let's talk about the most heralded recent high school recruit, Notre Dame's current starting quarterback, Jimmy Clausen. For all intents and purposes, Jimmy Clausen has done very little at South Bend, and you could make the argument he needed a year or two to watch a starter perform in the role he is now in. When you throw any of these kids directly into the fire, it usually turns out bad. May I also remind you that these recruits, generally aren't used to being on the field with 11 opposing players and 10 on their own squad that perform at the level they do. When they were dominating on Friday nights in October, they were the only ones who could do what they do. Fast forward to playing on Saturday afternoons, on the national stage in front of 100,000+ are you going to guarantee they DON'T fold? Keep It Real, you'd be better served playing craps.

A judge opens up sealed grand jury testimony against Barry Bonds. The country is in the worst economic time of the past 30 years and somehow this deserves some play from the media? The taxpayers are already bailing out anyone and everyone with their hand out, you think they want to pay to put Mr. Bonds in the federal penitentiary system for the next ten years? This isn't like a few years back when we could afford to see Martha Stewart bake cakes over a jailhouse furnace. Right now we are already paying for O.J. Simpson to be in jail for stealing his own things,

Michael Vick because he brutalized and murdered dogs, (yes, not humans, dogs) in 10 states over 6 years, and at some point in the near future you can sure as sh*t expect to see Pacman Jones doing the perp walk for any one of six or seven possible felonies. Somehow the public and the media STILL want to see Barry Lamar Bonds wearing sideways pinstripes. As a country, in this economic climate, if we really want to put harmless men in prison and pay for their three square meals, how about we focus our efforts on the finance guys who got us in this mess? At least then, we can have a little bit of satisfaction that someone besides us is paying for the crimes of financial turncoats. That's a trial I want to watch, that's the jury of peers I want to be on. KEEP IT REAL!

I don't know if you know, but the world's most popular soccer player (actually, he is just most popular in America and England) David Beckham, is leaving the United States and the MLS. So are we done with this experiment yet? Are we done with calling soccer the next best thing in American athletics? Are we done pretending that this country will ever care about soccer when we have the NFL? The only reason we cared that he was coming to America, was because 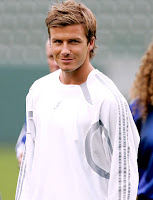 he's married to a former pop star and this is America, we love pop stars as much as we love cheeseburgers. The L.A. Galaxy of the MLS forked over a few million dollars to get David Beckham, England's most famous athlete, and slam him down on the West Coast. We cared more about what he and his wife wore on the red carpet than what he did on the soccer pitch. He has David Beckham cologne, which I guarantee sells better in American than it would in any other country. This move wasn't to get the youth of America to continue to play soccer, or to build the MLS' popularity in The States, it was done for pure greenbacks, it's about time soccer enthusiasts realize that. David Beckham will move his family from sunny Hollywood and put them down in Milan, Italy and it is a better fit for them. I've never met "Becks" and I'm sure I never will, but I have just one lasting sentiment for everyone who hoped he'd put a pulse in the MLS: This is America, The United States of America, we fill football stadiums to the brim on Sundays, we put billions of people in front of the television to watch Super Bowl Sunday, we are the country that has produced "Broadway" Joe Namath, the Pittsburgh Steel Curtain, America's Team, and Peyton 'friggin Manning. In this country, there is the NFL and then everything else. KEEP IT REAL!