Got A Coach, Now What?

Almost a month has gone by since we last mock drafted the first five picks in this April's NFL Draft. All NFL head coaching vacancies have been filled. The New England Patriots have placed the teams franchise tag on back up quarterback Matt Cassel. A new Super Bowl Champion has been crowned. Oh yea, all underclassmen who want to return to the ranks of college football, have declared one way or the other, including my former expected top pick: Oklahoma QB, Sam Bradford.

With all that has happened, I'm forced to release the second installment of my NFL mock draft, which will include picks 6-10 then picks 1-5, several days earlier that originally expected.

Let's Mock It Up!

10. San Francisco 49ers Brian Orakpo, DE Texas The second best defensive end in the draft, Brian Orakpo is a nasty 6-4, speed rusher, out of the Lone Star State. His 10.5 sacks, in his final season as a Longhorn, would be a welcomed addition to the 13th ranked defense in the league. The 49ers new head coach, Mike Singletary, will put a defense on the field that includes such players as veteran end, Justin Smith and 3rd year sensation Patrick Willis, to which Orakpo would be a welcomed member. Last years first round pick, Kentwan Balmer, will need to produce in 2009 to help this defense take the next step.

9. Green Bay Packers B.J. Raji, NT Boston College One of the major reasons why Boston College was among the nations toughest defenses in 2008 was none other than defensive tackle, B.J. Raji. The Packers finished 2008 with the 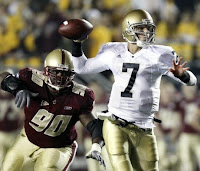 20th ranked defense in the league which included allowing just under 24 points and 330 yards per game. The 324 lb. Raji would instantly plug the middle of the Packer defensive line. For a defense which gave up nearly 132 yards rushing per game, and a defense that needs to play against Vikings RB, Adrian Peterson, twice a year, Raji would be a perfect fit. In his final season on Chestnut Hill, Raji recorded seven sacks playing alongside fellow defensive tackle and NFL hopeful, Ron Brace. With Raji in the middle, Packer linebackers, A.J. Hawk and a healthy Nick Barnett would be able to get back to the defense that helped the Packers go 13-3 in 2007 and turn around a woeful defense that receives much of the blame for their 6-10 fall out this past year.

8. Jacksonville Jaguars Michael Oher, OT Ole' Miss I'm as disappointed in the Jaguars as anyone. After finishing 2007 like gangbusters, I was sure they would come back in '08 and move right to the next level of championship contenders . . . WRONG! The reason being was that their offensive line turned into swiss cheese. Their offensive line forced Garrard into bad decisions, they had him playing from his back more than any team in the NFL, and watched their rushing offense go from second in the league in 2007 to eighteenth in the league in 2008. The Ole' Miss tackle is highly touted and at number eight would be a drop off as to where other mock drafts have him going. If he gets past the Raiders expect to the Jaguars to snatch him up. Not to mention that the Jaguars loved him after coaching him at the Senior Bowl.

7. Oakland Raiders Jeremy Maclin, WR Mizzou This is my surprise pick of the '09 NFL Draft. Because this isn't who I think should get drafted at number seven, rather a guess at what will happen at number seven. I could see Jeremy Maclin jumping up on the Al Davis draft board. For starters, he was a game changing wideout at Mizzou. In his final year at Missouri he caught 102 balls 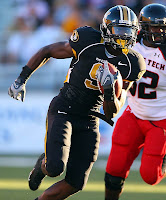 for 1,260 yards, he has break away speed, and all the flash that brought Al Davis to select JaMarcus Russell and Darren McFadden over the past couple seasons. His speed will impress at the combine and while some mock drafts note that Davis hasn't selected a wideout in the first round since 1988, that is precisely the reason he will, it's about that time for something nuts to happen. Only the Cleveland Browns receivers had less receiving yards and no team had less catches (222) than the Oakland Raiders did in 2008. You think this gives Al reason enough to select Maclin? The speedy Maclin was also a exciting return man at Missouri, over two seasons he returned 80 punts and scored five touchdowns for the Tigers, Davis would love his dimensions. Furthermore, the Raider defense wasn't all that bad in 2008, it isn't like Al to do the sensible thing and select an offensive tackle here.

6. Cincinnati Bengals Eugene Monroe, OT Virginia If you want what is left of Carson Palmer, you need to keep him standing upright. I'm of the opinion that scouts will see 'Bama tackle, Andre Smith, as the best tackle in the draft leaving the Bungals (no, I meant Bungals) picking between Eugene Monroe, Michael Oher, and even Baylor's Jason Smith. While Palmer was on the shelf in '08, the Bengals managed the NFL's worst scoring offense, 12.8 points per game, and the leagues 29th ranked rushing offense. This pick needs to be an offensive tackle and Virginia's Eugene Monroe is the best in most books, and the best available right now. The 6-6 quick footed Monroe, will add power to an injury riddled offensive line and hopefully allow them to improve their rush offense and move the scoring in the right direction.

5. Cleveland Browns Aaron Curry, LB Wake Forest Mangini has some pieces to the puzzle on offense already, the defense is what needs fixing, with the Chiefs passing on Curry that leaves the Butkus Award winner right there for the Browns at #5. Like I said a month ago, playing in a division that includes both Baltimore and Pittsburgh, two things are a must: (1) Stop the run and (2) stop the run. Aaron Curry was one of the nation's premier defensive players in 2008, earning top linebacker honors playing in the ACC for the Demon Deacons. Curry is versatile enough to play both inside and outside for the Browns, and he's got tremendous speed and is known to be over aggressive at times, with linebackers such as Ray Lewis and James Harrison playing in the same division, it'd be good for the Browns to match talents. Curry is a hit no matter what way you look at hit.

4. Seattle Seahawks Michael Crabtree, WR Texas Tech No way the best athlete and best football player in this draft drops past the Seahawks. I'd even go so far as to argue that it'd be criminal if he did. The Seahawks need Crabtree, they need a playmaking wideout who can spread the field and get this offense back on track. They have the quarterback. Have you seen those Matt Hasselbeck commercials for EAS? Either he has some left in the tank or those guys who do the spot should get more credit for making him look good. Crabtree has incredible

hands, runs fantastic routes, and can move with the ball after the catch. What more would you want if your Seattle? Yes, Texas Tech threw the ball more than anyone in the continental U.S., but someone still has to make those plays, that someone? Mike Crabtree. The two-time Biletnikoff Award winner is a mortal lock to be an NFL hit, especially when he's got a NFC Champion quarterback throwing him the ball. The only thing you might see is Jim Mora Jr. screw this up, the new head coach isn't as offensive minded as Mike Holmgren was. Three points: (1) Branch wasn't the guy you thought he was, and you should have known that (2) Nate Burelson, is coming off a torn ACL, never the same (3) I've had this pick pegged for a year!

3. Kansas City Chiefs Everette Brown, DE Florida State I think the Chiefs taking the best available defensive lineman is the way they'll go. Pioli heads out and hires a new head coach, former Cardinals offensive coordinator, Todd Haley. He's got Brodie Croyle and Tyler Thigpen in the stable. They are both young, you go out and see what they have. If you need to, go out and sign a veteran to play under center. Drafting Mark Sanchez isn't the way to go, and they know that. Either the Seminole defensive end or the Wake Forest linebacker, Aaron Curry should be the selection here. Either defensive player provides immediate impact and both give youth to an aging defense. If Pete Carroll doesn't think Mark Sanchez is ready, then I don't think Mark Sanchez is ready.

2. St. Louis Rams Andre Smith, OT Alabama Until someone gives me a valid reason as to why the Outland Trophy winner, Andre Smith, isn't the consensus best offensive lineman is this draft, my opinion remains the same as it did a month ago:

"No brainer. We didn't get to see him play in the Sugar Bowl, but come to find out, his absence is what solidifies him being the #2 pick, maybe even the #1. With Smith on the shelf due to a rumored NCAA rules violation, the Crimson Tide and John Parker Wilson gave up the most sacks they had all season, eight. While All-American caliber back, Glen Coffee, had his lowest rushing total of the season, 38 yards, and led a rushing attack that averaged just 0.9 per carry, their fewest of the season. All due respect to the Utah and their undefeated season, but 'Bama was playing without a very, very, special player, and it showed. The team selecting Smith, would be the same team that was smart enough to take Orlando Pace twelve years ago as the #1 overall, Smith would be the heir apparent to Pace, a future hall of famer. The 6'4", 340 lb. offensive tackle is big and physical, like Jake Long in 2008, and Joe Thomas in 2007, Andre Smith is your #1 tackle available in this draft. The move also protects what is left of Marc Bulger and will rejuvenate Stephen Jackson, who is still one of the leagues premier backs." - January 14th

1. Detroit Lions Matthew Stafford, QB Georgia The Titans former defensive coordinator over the past eight seasons, Jim Schwartz, is now at the helm in the motor city. Not an ideal situation. If you think Jim Scwartz is going to be Mike Smith or Tony Sparano, he's not. There is no Bill Parcells or Thomas Dimitroff 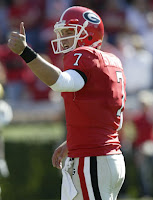 running the show in Detroit. The Lions need a quarterback, the only way they don't draft one with the top pick is if they've maneuvered a deal for Patriot backup, Matt Cassel. Before I tell you why Matt Stafford could work out, you have to know one thing, in no way do I think Matt Stafford is the way to go. They have a bad offensive line, and the only time a rookie quarterback succeeds is when you have people to protect him and somewhat of a rushing attack I.E. Matt Ryan & Joe Flacco. With that said, the Lions need a franchise player, Matt Stafford has that personality, hell, he just played quarterback for the bulldogs in Athens, GA, it doesn't get much bigger than that. He does have more NFL potential than any quarterback in the draft and that probably is all the Lions need to hear. Moves need to be made in Detroit, and if your cornerstone is going to be Matthew Stafford, then you need to be ensure you protect him as your very first priority.