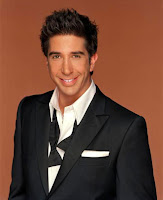 Time to give props. Peyton Manning is the best quarterback since the Young/Aikman era. No quarterback over the past 15 years, has been this good and more importantly, this consistant. The New Orleans born Manning, has thrown for over 3,000 yards in each of his 11 seasons, including eight 4,000 yard seasons. He has thrown 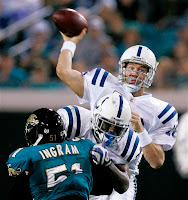 for at least 26 touchdown passes every season under center. Since his rookie season, Peyton has never had a quarterback passer rating lower than 90.7 and has yet to throw more than the 28 int's he threw that same rookie season. The two-time MVP (2003,2004) may be having his best season of his eleven year career. Since starting the 2008 campaign with an injured veteran center, questions surrounding Marvin Harrison, and a 3-4 start with two home losses, Peyton has lead the Colts to eight straight wins. Over that stretch, Manning has thrown 16 touchdown passes and only 3 int's. The Colts boast wins against playoff bound New England, Minnesota, Baltimore, and Pittsburgh. Peyton Manning is the 2008 MVP, and there is nothing you can do about it. KEEP IT REAL!

The 76ers are awful. Shall I continue? They spent $80 million on Elton Brand this off season, a guy who averages 16 points and only 9 rebounds a night cost them $80 million. Two guard, Andre Iguodala, is averaging just 14 points 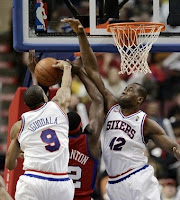 a night, 5 off his career average yet he is cashing a check for this season worth $11.3 million. That isn't even close to the worst, center Samuel Dalembert is making close to what Iguodala makes and he's almost seven feet tall yet only puts down 6 points and 9 boards a night. WoooHooo! More than $36 million dollars invested in three players and the Sixers are off to a fantastic 11-14 start, twelve and a half games out of first place, and the kicker, they just got head coach Mo Cheeks canned just a few weeks before Christmas. 27 NBA teams average more ppg than the Sixers, 11 different big men grab more boards than Brand, including Marcus Camby who replaced him with the Clips and 6'9" Knick, David Lee who makes oh gee . . one million a year. The funny thing is, the NBA is so top heavy, the Sixers aren't even in last place. Here's a pre-cursor to all these teams desperately waiting for the slue of NBA free agents in the Summer of 2009, not even $36 million to your three big men can put a banner in the rafters. Then again, the Celtics pay out $61 million to theirs and a second banner in as many years could be raised very soon. Keep It Real!

Charles Barkley needs to stop. You know who I want making my head coaching choices for an elite college football program? Not a retired NBA hall of famer, I'd prefer an athletic director or a school president with his career on the line, or better yet just the guy conducting the interviews would be nice. Sir Charles, you might be right, the hire might have been about race, but by making such an explosive remark, what kind of shot are you really giving the guy they DID hire, Gene Chizik, to succeed. I mean if you want to use college football as a platform lump the entire nation in, the limited amounts of opportunities for African-American coaches,

anything, but to attack your university and say emphatically that the only reason Chizik is there is because the color of his skin, aren't you doing the same thing you despise? You could hide behind the "I wanted my school to make a splash, but all they did was the same old thing" but the truth is, you don't care about a splash you have an agenda and could care less about the university, the Chizik family, or the football program. I agree that there is a root problem in college football, I wonder why Ty Willingham was ousted at Notre Dame but Charlie Weis isn't. I wonder why Lane Kiffin gets a job at Tennessee after a dismal NFL experience, and I also wonder how Syracuse, Clemson and Auburn fill their voids without Turner Gill, but let's talk about the situation as a whole and leave Chizik out of it. You want to go on resumes alone? Last time I checked Buffalo was playing the likes of Western Michigan and Temple while the Iowa State team lead by Gene Chizik is playing Kansas, Nebraska, Oklahoma State, Missouri, Colorado, and Texas A&M. We even have a "like" opponent, Kent State, who Gene Chizik's team destroyed 48-28, and Turner Gill's squad lost to, 24-21. Do your homework on that Charles? Here's another one, Chizik was a coordinator on that undefeated National Champion Auburn team several years back, you don't think the school wishes they could have made him in charge then? Would you have said anything at that point? Here's the thing about Barkley, his idea is correct, college football is heavily dominated by the good ole' boys network and that is a very big issue, it's even to big for me to talk about, but when it comes to Charles he just pops off about this without scratching the surface. KEEP IT REAL CHUCK! Sometimes you need to do your homework before you present to the class.

Back to the Northeast weather, ughhhhhhhhhhh. Until Next Week.
Posted by Lynchy at Friday, December 19, 2008

I love charles barkley!! keepin it real in the gyms in College Station!!!