Bowls are sets, post season awards are being polished, and the Texas Longhorns are still left out in the cold. Were putting that to the side for now, there isn't enough time or words that are making Mac Brown feel better today. Instead we are breaking down the bowl selection into three categories: The Good, The Bad, and The Ugly, let's get after it.

The Good While I think Southern California is the nations premier college football program in the country, and I follow that with the belief that 75% of college football fans want to see them in the title game, they aren't. As a consolation prize, I give you the 2008 Rose Bowl. The Rose Bowl will consist of the Trojans from USC (Pac 10 Champs) and the Nittany Lions of Pennsylvania State (Big 10 Champs). You want defense? This is the game for you. Penn State and USC are two of the nations top five defenses when it 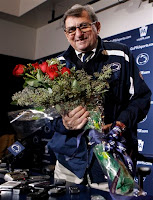 comes to yards allowed per game. The Trojans allow a nation leading 206 yards of offense per game while their opponents allow just 263.9 yards per. Between Navorro Bowman of Penn State, 98 tackles (54 unassisted), and SC's all-world linebacker, Rey Maualuga, these two defenses don't give an inch. In ten of USC's twelve games they've allowed just ten points or fewer, that would include wins against Ohio State, Oregon, Notre Dame, and UCLA. 450-93, USC has outscored their opponents 450-93 in rout to an 11-1 season and a seventh straight Pac-10 title. As for Joe Paterno and friends, the Nittany Lions are flat out dominated their schedule. Blowout road wins against conference foes Wisconsin and Purdue, a late October victory at Columbus, and a early season lashing of Pac-10 Oregon State, 45-14. In their final regular season game the Nittany Lions dropped a top twenty ranked Michigan State team, 49-18, the Spartan rushing attack rushed for only 35 yards on 24 attempts. SHUT DOWN. Junior quarterback, Daryll Clark tossed four touchdowns and ran in for a fifth en route to a 341 yard passing day. If were talking similar opponents, State dominated the Oregon State Beaver team that gave USC their only loss. On the other hand, USC hung 35 on an Ohio State defense that held the Nittany Lions to just one offensive touchdown. USC v. Penn State, Pete Carroll v. Joe Paterno it doesn't get much better than that.

The Bad Ohio State in the Fiesta Bowl, wait, the Tostitos Fiesta Bowl in general is BAD. I saw what USC did to Ohio State in September, they got thumped. I watched how LSU and Florida treated the Buckeyes in Back-2-Back national championship games, they got thumped. Now you want to feed their true freshman quarterback, Terelle Pryor, to the Longhorns in Glendale? May I remind you that Texas fans travel well, and now they only have to travel to the state immediately

west of them, good idea. Also, Ohio State has two losses against teams that are already in a BCS Bowl Game, apparently the BCS has no problem hanging another loss on this team to further validate how big and slow the Buckeyes have become. About the Longhorns, if anyone is going to play one of these Bowl Games like they were playing for a National Championship, it's Texas. The Longhorns had 1 hiccup, JUST ONE! Like I've said a million times before, if not for the miraculous play of the nations best all around football player, Michael Crabtree, the Longhorns are playing for a title as the nations only REAL undefeated team. (Yes, that was a dig at Utah) Texas averages nearly 44 points a game, they've scored 50+ in 4 games this season, boast four top 15 wins, and are the only team to that has a legit gripe about the national title. Again, the Buckeyes have played defense against Big 10 offenses all year, and now they get a Heisman hopeful whose just tossed 40+ touchdown passes. THAT'S THE TEAM YOU SELECT TO PLAY A TWO-LOSS OHIO STATE PROGRAM? Good Luck Buckeye nation, you get your Christmas present late, it's worse than coal.

The Ugly At first glance I was going to bang on the BCS for the atrocities to Graham Harrell and Texas Tech. Second glance reminded me of the beat down they got served up in Norman at the hands of the Sooners. Instead I'm going to focus on that bowl which handed out some Oranges and round trip airfare to South Beach.

Disclaimer: I get it, I'm a Boston College fan and you don't think I'd say a peep if the Eagles were headed to South Florida, and your right, but since they aren't and this isn't your column, act accordingly.

The Orange Bowl will feature the ACC Champion Virginia Tech Hokies, and the Big East Champion Cincinnati Bearcats. Whose excited? The Hokies are ranked 19 in the BCS standings and the Bearcats are an over ranked and over hyped 12. Yet of course, an undefeated Boise State (9) team, who needs to find a big time conference and latch on or continue to be snubbed, and an 11-1 Co-Big 12 South Champion Texas 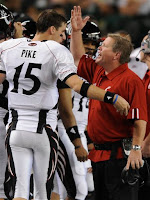 Tech (7) team is left out in the cold. But I digress. Back to the Hokies and Bearcats. You know what happened when Cincinnati played fellow BCS bowl team, Oklahoma? They got smashed in the mouth 52-26. Their big road wins? Hawaii, Akron, Marshall, and West Virginia? Please, spare me the Bearcats. Virginia Tech beat a red shirt freshman quarterback in his second career start to get to the Orange bowl. Road losses against Miami, Florida State, and Boston College . . . .Oh, and the Pirates of East Carolina who are in the process of losing their coach to Syracuse, that's right 3-9 Syracuse. Still excited about the Orange Bowl? Hey college football maniacs, watch the undefeated Utes against the Tide, the Nittany Lions head to Pasadena to fight the Trojans, and the Gators get a shot at Boomer Sooner . . .Oh, and the ACC Champ is playing some Big East team.

That's the Good, the Bad, and the Ugly of the 2008 BCS Bowl Games. Don't forget to watch the Music City Bowl, live from Nashville it's Boston College v. Vanderbilt. ARRGGGHHHHHHHHHH!
Posted by Lynchy at Monday, December 08, 2008

Music City bowl will be very exciting, I can't wait to watch it. The cram of the crop from SEC vs the mighty BC oh my goodness I just can't wait.