Were starting off this week with some good, because after that, it gets pretty ugly. Banging on your ex-girlfriends to the Canadian press, shooting yourself in the leg with your own gun, wait your own ILLEGAL gun, and of course some Heisman hysteria.

Bam! Keep It Real Friday is off and running.

Why Dustin Pedroia is aces in my book, and he should be in yours. Coming off consecutive post-season awards, the American League Rookie of the Year (2007) and Most Valuable Player(2008), Dustin Pedroia was awarded with an approximately six year deal worth 40 million plus from the Boston Red Sox. No, he 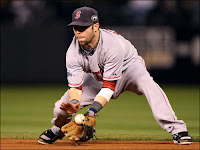 isn't making the ten million a year plus that fellow American League MVP's, Alex Rodriguez, Justin Morneau, and Vladimir Guerrero make, he's making much less and his new contract will never give him what they make. So why is he aces? Because, in his own words “I probably would have made more money (going year-to-year), But I’m in a place that I love. My first thought was, ‘I play for the best team. Who wouldn’t want to play for the Boston Red Sox? We’re going to have a chance to win every year and the fans are the best, so why not?’ It fits.” In a star driven world with athletes refusing to play until they get theirs, and letting thousands maybe millions of children down in the process, Dustin Pedroia is above all that. The reigning American League MVP will get another chance for a big pay day in his career, but as of right now, nothing is more important to him than winning. As a fan, we can't ask much more than that. KEEP IT REAL!

Plaxico Burress is just another in a long line. Idiot wide receivers aren't at a premium today, they can be found all over the place. The Giants give Plax $35 million and he did what obnoxious wide outs do, screw them. Chad Johnson of the Bengals changed his last name to Ocho Cinco, not his number which is eighty-five, he changed his last name to the spanish form of eight-five. This was all coming off the heels of trying to force his way out of Cincy, that went well for 'ole Ocho. Cowboy wide out, Terrell Owens, has continually tried to

pressure offensive coordinator Jason Garrett to run the offense through his 35 year old legs. After owner Jerry Jones bailed T.O. out of Philly when they wouldn't give him what he wanted. You love Randy Moss now, don't you? Woudln't have loved him if you were a Vikings fan, oh no, as a Viking Randy mock mooned the crowd in a post-touchdown celebration, he walked off the field in the middle of a game and quit on his team, and the icing, Randy pushed a meter maid half a block with his SUV so she wouldn't give him a ticket. Instead, he got a felony charge. When the New York Giants make their deep postseason run at a Super Bowl, I hope owners everywhere take notice: You don't need moron wide outs to win the Super Bowl, between Owens, Moss, and Johnson, three of the games premier wideouts, they have zero Super Bowl wins. Give me a running back and a strong defense, we don't need THAT guy. Keep It Real!

Sean Avery, Elisha Cuthbert hates him, the NHL and commissioner Gary Bettman hate him, Martin Brodeur definitely hates him, his coach and teammates have gotten pretty upset with him, and Stars GM Brett Hull isn't to pleased with him. However, you know who likes him? The Canadian press, the fans, and LynchyRightNow.com, why? Because he gives hockey a face, he gives us someone to have that love/hate with, and of course, he gives us something to talk about. Yea

referring to actress Elish Cuthbert as sloppy seconds probably was, okay it was, inappropriate, but it served a purpose, to keep hockey in the news. Any news is good news right? For a sport that allows you to drop your gloves and fight in the middle of the ice, are Avery's words really that shocking? In baseball we have guys like Derek Jeter and Alex Rodriguez. In basketball we have Dwayne Wade and Ron Artest. In football we have guys like Marvin Harrison and Chad Johnson. Finally, in hockey we have Sidney Crosby and of course Sean Avery. Sports need your villain, just like the movies do. How exciting would Batman be without Heath Ledger, or the Joker whatever? How exciting would Spiderman be without Wiliam Dafoe? Avery's a punk, and not all that special of a hockey player, but without him, am I writing about hockey for the second straight week? NO, KEEP IT REAL! BTW: (sloppy seconds or not, she's incredible)

What happened to the Jets? Spade a spade, he's Brett Favre. He'll take you two steps forward and one step back before you know it. Ask yourself, how in the world to you roll up to New England and back down to Tennessee, achieving two 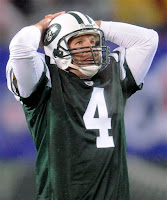 wins in the process and forcing the entire NFL to take notice, THEN you drop a clunker at home to the Broncos? I'll tell you how, because your the New York Jets and that is who you are. All the millions in free agency and all the veteran gunslingers won't shake you of that dirty habit. This team was 4-12 a year ago, no one goes from worst to first that quickly, especially in the division that has the Tuna and Belichick. Then again, they are currently 8-4 and have four games remaining. Those games are againt the likes of Buffalo, Seattle, San Francisco, and Miami, 3-1 or 4-0 at worst. This team isn't good enough to beat Pittsburgh or Indy in the playoffs, and it's time Jets fans come to the realization, he's Brett Favre and he'll win you two, and lose you one. Keep It Real!

And that's this weeks edition of your favorite Friday morning rant. KEEP IT REAL!
Posted by Lynchy at Friday, December 05, 2008

6 games seems like a bit much for what Avery said. In the end he just looked like a jack ass for calling all the cameras over. The NHL needs these types of storylines to stay relevant in the mainstream media though.

Gary Bettman's reasoning for the length of the suspension is ridiculous: "I wanted it to be clear to the fans that this isn't something that we tolerate — particularly fans with children who might have to explain to them what this statement was,"

Ummm, by suspending him for 6 games won't that just bring more attention to the issue? How bout this convo with your kid: