The Champs Are Soft: Week 14

I figure with all things college football on hold until Bowl Season, what better time to drop some NFL knowledge on the fans of LynchyRightNow.Com, any arguments? No? Good.

After 14 weeks of the NFL season we have pretty much mapped out who is going to be playing for the Lombardi, and how impossible it is to be the wire-to-wire front runner in the NFL. Since September, the Cowboys, Eagles, Titans, Jets, Giants, and Steelers, have all been legitimate contenders this season and each week we see another team fall and another team rise.

• The Patriots, Dolphins, and Jets are all too flawed to win the AFC. The Dolphins were 1-15 a year ago and I refuse to believe they will go from chumps to champs in one season. The Patriots are playing without Thomas, Brady, Harrison, Bruschi, Maroney, and maybe Matt Light, one playoff win would cap off a excellent BradyLESS season, but that's all they'll get. The Jets struggle way to much to be legit, and I trust playoff Brett Favre about as much as I'd trust a weather man.

• The Matt Ryan led Atlanta Falcons may have hit a high water mark three weeks ago in San Diego. The Buccaneers intercepted Ryan twice on Sunday and in a losing effort they were able to hold him to a 57.5 passer rating, his second lowest of the season. Matt Ryan will try and lead Atlanta to their 10th win of the season next week against Minnesota. The Falcons still can get into the playoffs, but it is going to take better play from Ryan if they expect to win on the road in either Carolina or the Meadowlands.

• The Steelers are the T-E-A-M to beat. Consecutive wins against New England, Dallas, and Baltimore have validated Pittsburgh and improved their record to 11-3 and staring down the barrel of the Tennessee Titans to take control over the AFC and homefield throughout. It isn't Big Ben, believe you me, it's the Steelers top ranked defense that shuts down opponents and forces Roethlisberger to make 1 or 2 scoring drives and that's all this defense needs. If the game is close, this defense makes plays to end it.

• Speaking of the Titans, if big Albert Haynesworth is sidelined for any amount of time the Titans run as beasts of the AFC is over. The recent losses to the Jets and Texans have exposed Tennessee. Rookie, Chris Johnson, was the Titans leading rusher in both of those losses, (65) against the Texans and (46) against the Jets. Stopping the run is what Pittsburgh does, and that doesn't look good for Jeff Fisher and company come next weekend.

• At 7-7, the Houston Texans are finally becoming what we thought they would be at the beginning of the season, very dangerous. Coming off their 4th straight win, the Texans are giving up just two touchdowns a game and rookie Steve Slaton has gone over the century mark in 4 of his last 5 games. The Texans, who started off with three straight road games due to hurricane season, @ Pittsburgh, @ Tennessee, and @ Jacksonville, have been behind the eight ball since the beginning of the season. However, with wins against Oakland and Chicago in the coming weeks the Texans could finish with their first ever winning season.

• Let me sum up the Arizona Cardinals. 3-4 on the road, their only road wins are against the likes of San Francisco (Pre-firing of Mike Nolan), the lowly, two-win, St. Louis Rams and of course the 3-11 Seattle Seahawks. You think they are winning in New England this weekend? Forgetaboutit. They have quality victories against the Cowboys, a 30-24 overtime win, and a 31-10 victory against the Dolphins. The Cardinals are going to finish 9-7, get 1 home game, and then go on the road, where they suck.

• The commish has to intervene here. The AFC West cannot have a division winner with an automatic playoff bid, that finishes 8-8 or even worse 7-9. In any other universe the San Diego Chargers would have been finished, done, over, had they lost 3 of 4 November games including two in a row at home. Yet, in the AFC West circa 2008, they are alive and well. A win at Tampa and at home against Denver and you have an 8-8 playoff team with a home game. They lost to playoff contenders Atlanta, Indy, Pittsburgh, Miami and Carolina, but they are still hopeful of a playoff bid. Even Denver, who BEAT the Falcons at Atlanta then turned around and let Oakland, yes that Oakland, throttle them in Mile High. Not Denver or San Diego deserve a playoff spot, especially the way Miami has played this season.

• Oh, that's right, the Dallas Cowboys are in the drivers seat for a playoff birth. The left for dead, drama filled, Pacman suspended, Dallas Cowboys just took Eli & Co. out behind the wood shed to the tune of 8 sacks including three from league leader, DeMarcus Ware. May I remind you, that with Romo under center the Cowboys are 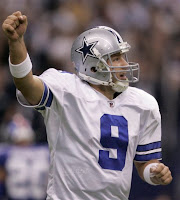 8-3, that includes the little hiccup in the fourth quarter at Pittsburgh last week. Maybe this team has too many superstar jugheads, maybe Tony Romo spends too much time on the dirt, and maybe Wade Phillips is the anti-Parcells, but they are 9-5 and in line for a playoff spot. They've won a shootout with Philly, dropped Green Bay before it became popular, the only team to beat Tampa between October and November, are the only team to score a TD on Pittsburgh in the 3rd quarter, and last night gave the Giants their 3rd loss of the season. Oh, and since Wade Phillips took over the defensive calls, DeMarcus Ware and Jay Ratliff have become unleashed. Do not sleep on the leagues most talented team, in the NFL maybe 3 teams can beat anybody, any Sunday, anywhere, and the Cowboys are one of those teams.