I would like to first take a moment to recognize NBA Finals MVP, Paul Pierce. The Celtic captain is heading into his eleventh season in Boston, and what an eleven years it has been. From the stabbing in a Boston nightclub back in 2000 to his amazing run in the 02' Eastern Conference playoffs, to of course, the raising of Banner 17 on October 28Th, it's been a long, hard fought road for Pierce. Your girlfriend may have a crush on Ray Allen (true story), the media may be 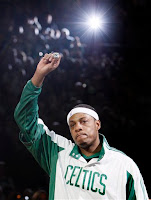 obsessed with the intensity of Kevin Garnett, but for my generation of Celtics fans, fans who caught the tail end of Larry's career, Paul Pierce is our Legend. I'll never forget my high school friends and I, just a year into college, traveling to the Fleet Center to witness every moment of playoff basketball in 2002. We were there to witness the greatest fourth quarter comeback in playoff history, all the way from a 74-53 deficit to defeat the New Jersey Nets and take a 2-1 series lead. Pierce dropped 19 points of his 28 that night in the fourth quarter, outscoring the entire Nets team who managed only 16 points. It was at that moment that I realized what Paul Pierce was. A Celtic. A model of consistency Pierce has been, in ten full seasons he has missed more than ten games only twice. Before the '07-'08 season, Pierce hadn't averaged fewer than 21 points a game since his second season in the league. The tenth overall pick in the 1998 draft has become part of Boston lore, he joins names like Williams, Russell, Bird, Ortiz, Bourque, Orr, and Yaz, joining a list like that would bring tears to any ones eyes. It came as no surprise to me on Tuesday night, when we all saw Pierce more emotional than ever. The Truth is Paul's number will hang in those same rafters next to that Banner 17 , because like he said "In this city, you don't raise banners for anything less than a title." In twenty years when Pierce has long been retired, I'll be able to look up into the rafters and recount the year 2008, and number 34. That is why he is The Truth, and has always KEPT IT REAL! (except for the time he got carted off in a wheelchair only to return minutes later and lead the Celtics to a victory)

HEY WORLD! Guess what?!?!? The Philadelphia Phillies are the 2008 World Series Champions. You know what else?!?!?! No one outside of the Keystone State gives a damn. Now look, I'm a baseball junkie, I watched every inning of the World Series, but the rest of America? They could care less. Primarily because the most memorable

thing about this World Series, was the weather report. However, I could remind you of the Josh Beckett like performance of Cole Hamels, the 3 homers and 6 rbi's in games 3 & 4 from Ryan Howard, or how about the dominance of closer Brad Lidge, but then again you've already made it clear you don't care. Even having the worst to first story of the Tampa Bay Rays couldn't get you excited, much less involved. You Kept It Real, what can I say? Hmmmmm wait, I've got it!

3 Ways To Fix The World Series:

1. Cut 10 to 15 games from the regular season or 3 weeks. Look, in the past week were approaching the midpoint of the NFL season, Heisman Trophy candidates are appearing, and the NBA has already tipped off, but we still don't know who the World Series Champs are. I can't find one person who will object to seeing a 140 games as oppose to the 162 that currently define the 4 playoff teams in each league. From pitchers and catchers reporting to spring training in late February to the final out of the World Series which is due to take place in November next season, the baseball season will span some 10 months of the year, pregnancy ends sooner than that. End this thing sooner, attempt to keep SOME interest of fans.

2. Yankees v. Red Sox While the entire national audience is subjected to several weekend Sox/Yanks match ups, they are missing out on the other 28 teams who play the game 6 days a week over the entire summer. Then, when the postseason comes around we are expected to get jacked up for teams like the Rockies, Rays, Brewers, and Diamondbacks. Look were in an age where we can watch every NFL game on every single Sunday, but baseball is played everyday, you've gotta force us to watch those games we don't, PUT THEM ON NATIONAL TELEVISION. When the postseason comes around, we'll know about players like Cole Hamels and Matt Holliday. I'm not objecting to a little Rays v. Rockies inter league action? Anybody?

3. For Christ sake already; Give the Cubs a ring. I mean what other ways can the Baseball Gods punish the Chicago Cubs and their loyal fans? First, you made them witness not 1 but 2 World Championships to their long suffering co-loser Red Sox. Then you made it personal, by slapping a ring on their cross-town rival White Sox. After that, the Cubs had one of Major League Baseballs best regular season records from wire to wire and you just got ugly, knocked them out in the NLDS and gave the tortured Philly fans theirs. I think you've made them suffer enough, so I can ask you, for God's sake and for the sake of World Series ratings, put the Cubbies in the Series and see what happens.

NFL TEAMS THAT ARE DEAD

(This is all contingent on injuries, ten game losing streaks, and of course the rest of the season)

Indianapolis Colts: The stories you hear are true, the Titans are as strong as advertised and Peyton Manning isn't Peyton Manning. The Colts squeaked out wins against Minnesota and Houston but remain 1-2 at home. They are currently sitting four games back of AFC South rival Tennessee and for all intensive purposes, are done.

Cleveland Browns: They've been done since game 1, so don't look for any miracle late season runs. Derek Anderson has looked pretty average and Brady Quinn still sits on the bench. Thanks Romeo Crennel, for bringing the Browns back to earth after last season.

San Diego: I don't know when you'll admit it, this team will make the playoffs somehow and you'll be drinking their cool aid. THEY JUST AREN'T AS GOOD WITHOUT MERRIMAN. Luckily for them, they play in the AFC West, which will most likely result in a 9-8 team winning a playoff spot.

As for the NFC

The Rams who started off 0-4 could have been playing for a division lead had they pulled out a third straight upset against New England last week. So as for whose dead in the water? The Lions who are perrenial losers and the 49ers who have already switched head coaches mid-season are out. Everyone else? All aboard. KEEP IT REAL!

I'm looking at the Boston Red Sox after two championship trophies yet I'm getting nervous. With all the talk surrounding free agent Mark Teixeira and the possible trade of ace Jake Peavy, for a team that came within outs of reaching the Fall Classic, yet again, I'm curious if that similiar Yankeeism could be entering their minds. I'm okay with uncertainty of Mike Lowell and David Ortiz, that is until they lose 3 of 4 to the Rays to open 2009. KEEP IT REAL!