No Gills, No Problem

So U.S. Olympic swimmer, Michael Phelps, isn't a fish and he doesn't have gills, still he's the closest were ever going to get to seeing a Merman (come on guys, Zoolander?) The most dominant Olympic athlete of the past 20 years, Phelps, is in the midst of completing one of the most grueling Olympic runs that any athlete has ever attempted (17 swims, in 9 days). The payoff? A record setting 8 Olympic Golds.

Phelps won his first Beijing gold on Saturday night, second in dramatic fashion on Sunday night, and third in dominant fashion on Monday night. I will be the first to say that I admit, I'm not a die hard "Olympics" guy. I don't anticipate the Opening Ceremonies, (which were incredible) I could care less about sports like fencing, water polo, and handball, but this year, because of Michael Phelps, I'm on board, all the way.

The Phelps story was somewhat built for Hollywood and while in Beijing it still maintains the Hollywood ending. To be a little crass, the "Frenchies," got Phelps and his teammates all fired up right before they hit the water for Phelps second bid at Beijing gold (4x100 freestyle relay) BAD MOVE! The heavily favored 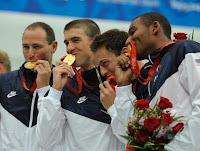 French team failed to beat the Americans, and in the worst way possible. A come from behind American win by just fractions of a second sent the French team home, and you thought the Celtics come from behind win to beat the Lakers at the Staples was the best we could get in 2008. Phelps, with team in toe, kissed the golds, listened to the National Anthem while the French looked on, priceless. Hey, this is as close to USA v. Russia, circa 1980, as your going to get.

The U.S. swimming phenom goes for more golds tonight, and after tying the likes of former U.S. Olympic greats like Mark Spitz and Carl Lewis, Phelps looks to swim past t 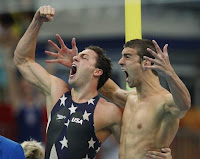 hem. In case you haven't read each of the 30 Olympic previews put out by everything from magazines, newspapers, or online sources, Michael Phelps can achieve a record setting 8 gold medals in this Olympics. Not Tiger Woods winning the U.S. Open on one pin, the Patriots choking in the Super Bowl, or the Boston Celtics return to glory should trump this bid. As long as Phelps doesn't turn down the road of Big Brown, he'll have thirty years of sponsorships from Wheaties to Gatorade ahead of him. For the remainder of the Olympics, this is a Michael Phelps world, and your welcome to live in it.
Posted by Lynchy at Tuesday, August 12, 2008