Even though that NFL preview tired me out and pissed you off, I'm back at it with Keep It Real Friday. Act like you don't love it.

Sticking with recent events, San Diego Chargers linebacker, Shawn Merriman, What are you doing? I'm all for playing hard, banged up, and even through pain, what I'm not for is playing stupid. I don't claim to be a doctor but I do listen to them, if four doctors say your knee is in trouble, it probably means your knee is in trouble. Merriman knows his body better than anyone, I trust that he

is confident enough in the knee that he thinks it'll hold up, but is it worth throwing away one of the best young careers in the NFL? He's been compared to guys like Derrick Thomas and Reggie White, if that is the case your looking at a future Hall of Famer. Shawn, no one is putting you in "The Hall" on speculation. Your an incredible linebacker, your the leader of a top 3 defense in the NFL, and the odds of this being THE YEAR, the Chargers win it depend on alot more than just you. Strahan played like 20 years before he won a ring and that almost never happened. The Chargers are set for a 3 to 4 year window, have the surgery, come back in a year and tear up the league. If you really mess up that knee in say November, your looking at two seasons out the door before your 100% again. Alot can happen in two seasons just ask the Chicago Bears who have seen their window open and close in just two seasons. I admire the willingness, but Shawn, KEEP IT REAL!

In one dugout sits a team flush with young talent, from Boston's All-Star second basemen, Dustin Pedroia, to left-handed phenom Jon Lester. In the other dugout, lies a coffin, inside that coffin, the season of the 2008 New York Yankees. After dropping the first two games of a three game set against the rival Red Sox, in their house, you can officially place the final nail in their coffin. In their last season in 'The house that Ruth built', the Yankees, will ironically end their 13-year streak of playoff appearances. The team with the highest payroll in major 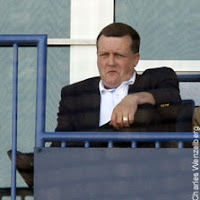 league baseball is on the outside looking in. We could talk about the ballooned payroll ($200 Million), we could talk about Joe Torre donning Dodger Blue, or perhaps we could talk about Alex Rodriguez failures in the proverbial clutch but that's all secondary. The person to blame is the boss, the man who brought in the likes of Pavano, Randy Johnson, and any former All-Star regardless of if they fit or not. The son, who refused to deal unproven rookies for the, then Twins ace turned Mets All-Star, Johan Santana. I'm glad the Yankees will spend their money on Sabathia in the offseason, a pitcher who had his struggles in the American League this year before getting traded to the National League and dominating. In the past eight years, the majority of the moves that the Yanks have done, haven't worked out. New Stadium, New Manager, New Ace, SAME OLD YANKS. KEEP IT REAL!

You WANT me to say Tim Tebow is the next Archie Griffin, you NEED me to say Tim Tebow will be the next Archie Griffin, well your not getting that from me . . .yet. No one in the history of the Heisman Trophy has gone back to back, except Archie Griffin. While it may be to early to call, I'm calling it. Chomp, Chomp Gators, Tebow will be at the Downtown Athletic Club, but all he'll be doing is shaking the hand of the 2008 Heisman Trophy recipient. Sam Bradford of the Oklahoma Sooners may be playing for a National Championship but he isn't the Big 12

quarterback taking home the Heisman in December. That my friends is headed to Lubbock, Texas. My prediction for the 2008 Heisman Trophy is none other than Texas Tech quarterback, Graham Harrell. THAT JUST SOUNDS MORE HEISMAN! Harrell, the senior signal caller for the Red Raiders, has already thrown 10,600 yards in his career to go along with his mind-numbing 89 touchdown passes. Coming off his junior campaign which he tossed 48 TD's (most in the nation) and threw for over 5,700 yards. That would be more passing yards than Chase Daniel, Colt Brennan, and of course Matt Ryan. The number 1 reason you can pencil Harrell into the fray? College football's top wideout and guaranteed top 10 pick in the 2009 NFL Draft, Michael Crabtree. The sophomore receiver brought in 22 touchdowns and caught 134 passes for nearly 2,000 receiving yards. A year together under their belt and Harrell will wrap up the Heisman by mid-October. The REAL Heisman trophy front-runner.

Riiiiiiiiiiiiiiiiiiiiiiiiiiiiiiiiiiight, I'm only 25 and I couldn't tell you the last time the Dodgers were actually in contention. If the majority of teams that were "in the mix" added guys like Greg Maddux, Manny Ramirez, and Casey Blake, they'd be distancing themselves from the pack by now. The Dodgers? Well they've just dropped the last 9 of 11 games and are resting 3 games back of first 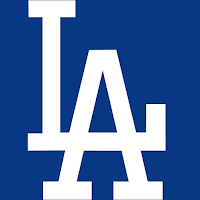 place in the National League West (and are three games under .500). Forget the Wild Card, their dismal record puts them 12 games off that pace. The Dodgers are 19th in the league in batting average, 25th in the league in slugging, and 18th in on base percentage. (behind teams like the Orioles and Indians) This is the team that was making a run at a championship? In what world? It is no wonder why Manny likes it in L.A., their thought process is about as logical as his. Monster contract to a declining Andruw Jones? Brilliant! NEWSFLASH, if every other team is staying away, maybe YOU should too! Sorry Joe, this probably was a bad idea. Then again, your getting paid like a king, so it isn't all that bad. Hey L.A., is it Trojan season yet?

SI's NFL Preview, straight trash. Next to Peter King, has anyone over at SI actually followed football for the past three years? "Dr. Z's" , Super Bowl prediction . . .New England v. Philadelphia? We've seen this right? Oh that's right, several years ago they actually PLAYED THE GAME, and the Pats won. Since the departure of Terrell Owens the Eagles have played so well, wait, no that's right THEY HAVEN'T. NFC East experts grade each of the divisions teams in nine different categories. Michael Lombardi gives the nod to Dallas in, QB, RB's, WR, TE, OL, DL, and LB's. He gives the nod to Philly in DB's after the signing of Samuel and it's a draw when it comes to special teams, given Philly rookie DeSean Jackson and of course the Cowboys addition of Adam Jones. Both teams have quality kickers in David Akers and Nick Folk. So when he clearly has the Cowboys better ALL OVER THE FIELD, yet somehow they are winning the division and going to the Super Bowl? The Eagles haven't given Donovan a quality wideout since Terrell and he isn't getting any younger. FOR ANY reason if Westbrook goes down, the Eagles season is over. If Barber goes down, or Jason Witten, or Owens, the Cowboys have backup plans 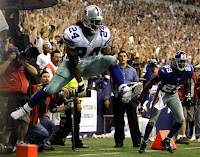 all over the field. From rookie RB Felix Jones to rookie TE, Martellus Bennett, the Cowboys can run, pass, and block better than every team in the division yet Dr. Z and the rest of the SI football experts believe that the only team in the division that DIDN'T make the playoffs is bound for the Super Bowl, after adding SYSTEM DB, Asante Samuel. Ask yourself this, how many guys have the Pats let sign with other teams and lived to regret it? They pick the Cowboys to go 10-6 and make it in the back door of the playoffs as a Wild Card team. Last question, WHICH ROAD GAMES WORRY THE COWBOYS BESIDE AT PITT in week 14? Green Bay and Aaron Rodgers? A Strahan/Umenyiora less Giants defensive line? Maybe it's that soft as cupcake Dog Pound they visit in week 1? The two teams have almost the same exact schedule yet somehow Philly is escaping with a better record with less weapons? The Boys were 13-3 last season, show a little respect. KEEP IT REAL!
Posted by Lynchy at Friday, August 29, 2008