I'm going to start this off by saying, if you aren't watching HBO's HARD KNOCKS, a documentary of training camp with the Dallas Cowboys, you need to be. Aside from realizing that I cheer for the Yankees of professional football (I've been in denial), this show is absolute genius. From Jerry Jones giving his grandson a slap in the head to Cowboys defensive backs coach, Dave Campo, having his pants pulled down, this show has more upside than Mel Kiper and Todd McShay on draft day.

I give you the FIVE (5) reasons to watch HBO's Hard Knocks:

5. Blah, Blah, Blah. That's what I have to say to all of you who disagree with reason number 5. You might just be watching the very beginning weeks of a teams Super Bowl season. A Tony Romo botched snap against Seattle in 2006, a Patrick Crayton dropped pass against the Giants in 2007, at this point, what else could possibly go wrong for the Dallas Cowboys? This team is due, the Cowboys are the hands down most talented team in the NFC and with 13 pro bowlers,

whose going to argue? I've listened to the "experts" flaunt out the Saints, Vikings, and even the FavreLESS Packers, but the truth is, the Dallas Cowboys are decidedly the most dominant team in the NFC. Romo to Owens tops any quarterback to receiver combo in the NFC, DeMarcus Ware leads a defense that just added veteran leader Zack Thomas to the fold, and with the explosive rookie back, Felix Jones, the Cowboys added a perfect compliment to their All-World banger Marion Barber. Former "I'm way to comfortable outside the law" teammates, Tank Johnson and Adam "Pacman" Jones are looking to redeem their careers and lives in Big D. For a team that is coming off a 13-3 season and has the potential to put even more than 13 people on the Pro-Bowl roster, the Dallas Cowboys are primed and ready to march toward the Super Bowl.

4. Not only have the Cowboys granted HBO access to their training camp, they've granted them TOTAL access. In only the second episode of the show we've already been allowed to listen in on conversations with Jerry Jones and the agent of now former Cowboy receiver Terry Glenn. We got to see rookie hazing, the elder Cowboys (and Cowboy coaches) supplied fruit genitals (to be used as microphones) to the Rookies, those rooks had to then sing a song of

their choice while holding the genital shaped fruits and using them as mics. As mentioned before, defensive backs coach, Dave Campo, got his pants pulled down by some of his DB's, at which point he gave the priceless line "come on guys, you know I don't wear underwear." Another un-identified Cowboy climbed out of the ice tub and showed the camera men how ummmmm, god gifted him, no editing done there. On a more serious note, the Cowboys coaching staff gives you pretty much full access to their player assessment meetings, whose impressing and who isn't. Cowboys COO and Executive Vice President, Stephen Jones, gives you a complete look into the conversations he has regarding player contracts, signing bonuses, and where the negotiating stands. Un-signed rookies and free agents who are attempting to make the Cowboys squad are evaluated by front office members and even showcased for the viewers to see their progression at Cowboys camp. From the more obscene moments, to the unfiltered mouths of athletes, Hard Knocks doesn't leave much room for the mind to wonder about what happens off camera, it's all right there for us to see.

3. These Dallas Cowboys have very little drama. Unlike Packers camp with Brett Favre playing for the Jets, Giants camp with Plaxico Burress unhappy with his current financial situation, and Stephen Jackson, who still hasn't arrived at Rams camp, the Dallas Cowboys are all accounted for and ready to go. The relaxed attitudes of Wade Phillips and Tony Romo, the careful instructions

from coordinator Jason Garrett for his team to "play with swagger," and of course the most exciting man in pro football, Terrell Owens, the Dallas Cowboys are drama free and ready to pursue a ring. Rather than listening to reporters ask questions about a quarterback controversy, a player holding out, or even a coach on the brink, the Dallas Cowboys are left to do their own thing. The Dallas Cowboys have a veteran Super Bowl winning back-up quarterback, Brad Johnson. Their quarterback is injury free thus far, unlike Peyton and Brady. Star safety, Roy Williams, has switched numbers so QB's can identify his poor coverage as early. T.O. is selling t-shirts rather than doing sit-ups in his driveway (surprisingly this is much more productive) and of course, there has been no siting of Jessica Simpson. Always a good thing.

2. He isn't just rich, he's extremely intelligent. You can criticize Jerry Jones for many things, you can't however criticize him for what he is doing with these current Cowboys. 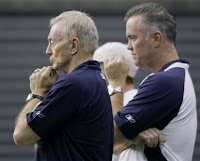 With the probable help of former head man in charge, Bill Parcells, it seems as though Jerry has begun to not only surround himself with people who have less of an agenda to move up, but people who have an agenda to bring the Cowboys back. Son, Stephen Jones, the coaching family Garrett (led by Offensive Coordinator and heir apparent, Jason Garrett) and of course the players coach to end all players coaches, Wade Phillips. Jones has been able to recruit and keep troubled stars for the benefit of his team, he's the boss in Cowboy camp and there is no doubt about that. The owner that once brought in power driven football guys like Jimmy Johnson, Bill Parcells, and Barry Switzer has attempted to make a transition toward non-self agenda guys like Wade Phillips, some would call them "company guys." This new Jones approach may just be the perfect way to bring back the winning ways of the Dallas Cowboys. During episode 1, Jerry starts off the season with an opening speech. He states "some say I'm a pretty good salesmen, I'm going to tell you the four rules of sales" he pauses and continues "the first one is to ask for the money, and I seem to have forgotten the other four." Coming from the man who has just financed the largest athletic stadium in the world. Big things happening in Big D.

1. The number 1 reason to not only watch HBO's Hard Knocks, but to cheer on the Dallas Cowboys: Because they are the DALLAS COWBOYS, America's Team, Hollywood on Turf, need I go on? 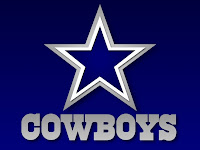 The Cowboys glory days seem so far away by now, the team hasn't won a playoff game in the entire Bush presidency, and what better way to ring in a new presidential term than inviting the Super Bowl Champion Cowboys to the Rose Garden? The superstar quarterback with the Hollywood girlfriend, the most physical wideout of the past twenty years, a owner with a wallet as big as the state of Texas. These are the Dallas Cowboys, the team that takes in the likes of Pacman Jones and Tank Johnson. If you remember the days of Michael Irvin dunking over goal posts, James Washington picking off Jim Kelly, Emmitt Smith running toward history, and of course America's golden boy before Tom Brady, Troy Aikman. Today in 2008 with Tony Romo under center and T.O. split out with Marion Barber in the backfield, tell me your not excited? Forget about those Giants and their amazing super bowl win, tune into Hard Knocks and get on board with the rest of America.
Posted by Lynchy at Tuesday, August 19, 2008