It doesn't have the cultural significance as say Jesse Owens circa 1936 in Berlin, but winning 8 gold medals in Beijing places Michael Phelps alongside if not ahead of nearly every Olympic athlete, ever.

I was excited about what I'd watched Phelps march toward over the past 10 days, but it wasn't until Thursday night that I realized how excited the rest of the America was. My friends and I aren't good barometers on who watches non-conventional sports, we watch poker, golf, and even NASCAR, but on Thursday night it wasn't just us

anticipating Michael Phelps next dive into the pool. About ten women, three bartenders, fifteen men, and three monkeys cheered on Phelps crazily as he dove in for his second time of the night. Funny thing is, he wasn't even competing for a medal, this was a preliminary heat. Now the monkeys may have just been copying what the humans were doing, but everyone in that bar was cheering this guy on like it was a game 7 of the World Series and a run was coming to the plate in the bottom half of the ninth. Two days later on Saturday night, in a bar, inside the Tropicana Hotel, in Atlantic City, New Jersey, hundreds of people sit and cheer on Michael Phelps as he races toward history. It may have took the greatest medal run in Olympic history to capture a countries focus, but consider it captured.

When American, Jason Lezak, completed his record setting leg of the 4x100m freestyle relay, and inched out the heavily favored French team to give Phelps his second gold medal in as many tries, I was hooked. Eight tenths of a second will do that for a guy who loves close finishes. From August 9th to August 17th, Michael Phelps jumped into the pool for 17 competitive swims, 8 for medals. His program was one of the most physically daunting programs ever attempted by an Olympic athlete. 2008 would be the last opportunity Phelps had at becoming the Olympic athlete he wanted to be. Michael Phelps beat opponents by the smallest of margins and the largest of margins, he smashed world records, he relied on relay teammates, he did everything with more confidence and control than Tiger on Sundays.

When ESPN chooses to do their lists of top 50 athletes of all-time, the Baltimore-native, Michael Phelps, will be in their top ten. To think on August 8th, he may not have even been in the discussion, then in a period of less than ten days, he is not 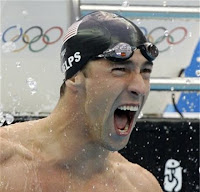 only in the discussion, he IS the discussion. Phelps will still be a competitive swimmer in 2012 in London, but he'll be 27 years old, to expect to race this program in four years would be to daunting for anyone, even Aquaman. For most athletes, becoming the most decorated Olympic athlete of these games would be sufficient, for Phelps, becoming the most decorated Olympic athlete EVER, was the goal. Michael Phelps is the new Gold Standard of Olympic dominance.
Posted by Lynchy at Sunday, August 17, 2008