Olympics drawing to an end, the college football season is about to take off, and of course more pointless overpriced preseason NFL games. Time to take your weekly dose of KEEP IT REAL FRIDAY, and like it!

Like most things involving professional team sports in the United States, Major League Baseball is the last to catch on. After ENTIRELY too long without it, baseball will finally introduce "some" form of instant replay into it's 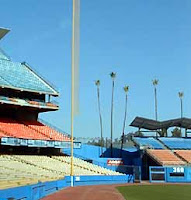 hallowed ballparks. It's time that baseball stop with all this sanctity of the game nonsense. Instituting instant replay is about winning a World Series and not having it be considered cheap because a walk off home run was actually a ground rule double. It's about every other professional sport giving the referees call more validity. Instant replay is about putting the 1,213,000 video cameras in a sporting venue to use for the game rather than just the television stations and owners. Were not going to challenge balls & strikes, were not going to challenge whether a player was safe sliding into home, all were doing is clarifying home run calls. To avoid instant replay when you have the opportunity to utilize it, is absurd. Yet to expect an umpire standing at the third base line to be able to see a small white ball fall one way or another from 100 yards away, is utterly ridiculous. KEEP IT REAL baseball, I want to see homers that aren't doubles or even worse, foul balls!

Would you rather be The Worlds Fastest Man or a Heavyweight Champion of the World? Little back story, the conversation was brought up on Mike & Mike in the Morning yesterday, it also included The World's Strongest Man but since pulling a fire engine isn't exactly a fair barometer, were leaving it out. The World's Fastest Man, is the title that is given to the athlete with the fastest

time in the 100m sprint, currently Usain Bolt of Jamaica with a world record setting time of 9.69 seconds. While very impressive to be faster than any man in the world, it really only makes you the last to be eaten by a pack of lions. You can't tell me who the fastest man in the world was twenty days ago and the only reason you could tell me who it is now is because it just happened. Other than a cheesy snapshot of you next to a giant clock, you don't get any trophy for being the Worlds Fastest Man. But if your the Heavyweight Champion of the World, for starters, your always called "champ" for the rest of your life, kind of like how the former presidents are all still referred to as "Mr. president." You don't get just a photo, you get like twenty championship belts, and women love wearing belts, especially ones with gold and diamonds in them. The prospect of a willing young lady wearing nothing but your championship belt? That's too awesome for anyone to pass up. I'm KEEPING IT REAL, nothing like a f-bomb laiden rant after winning the title belt . . "I TOLD YOU I'M THE CHAMP, NO ONE CAN BEAT ME, WORLD CHAMPION SH*T M*THA F*CKA" Chicks don't dig the track, they dig the ring and the belt . .

C.C. Sabathia is the National League Cy Young, deal with it. Since arriving in Milwaukee, Sabathia has been the National Leagues most dominant pitcher, hands down. In nine starts for the Brewers, Sabathia has pitched FIVE complete games since coming over from the American League. The Brewers new ace has 69 strikeouts in just 73 innings and has only allowed a combined 13 earned runs. I know Brandon Webb has been doing it all season and he's 19-4, he's very very very good, I GET IT. Sabathia is an American League pitcher in the National League, if what he's done in a Brewers uniform thus far isn't further validation of the much superior league then I don't know what is. If Sabathia reaches 15 wins by the end of September, you've gotta give the guy who goes 15-0 since July 6th the nod for Cy Young, ESPECIALLY if the Brewers get int he playoffs. Love Brandon Webb, but back-to-back Cy Youngs in different leagues, forgettaboutit. KEEP IT REAL!

have gotten hardcore into beach volleyball. First off, you play in the sun the majority of the time, unless for some reason your in South East Asia for games of the 29th Olympiad. I don't think there has ever been a female beach volleyball player who didn't have some sort of sneaky hotness to her. But the main point here is, and I'll credit my buddy Joe on this one: If your going to be a professional volleyball player, why the hell would you be an indoor volleyball player. There are way to many people on the court, you don't have a cool uniform or get to wear wrap-around Oakleys, and of course, you have to wear bare white knee pads. With the exception of jail, there isn't a place where knee pads makes you more vulnerable to ridicule. Next to Phelps, Bolt, and Redeem Team, I think beach volleyball has been one of the top storylines of these Olympics. Love me some BEACH VOLLEYBALL!

Wrapping up Keep It Real Friday with this . . . I'm done with the preseason football games. The 49ers v. the Bears will be bad enough during the regular season with both teams starters on the field, whose excited for the J.T. O'Sullivan v. 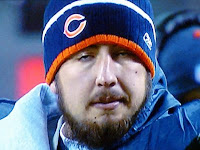 Kyle Orton matchup? But to have that teaser on a Thursday night preseason action, it's not right. I'm going on a limb when I say this but neither of those quarterbacks will win more than 6 games this season and that's a stretch. Alex Smith for the 49ers and of course everyones favorite 5'8 quarterback, Rex Grossman of the Bears have officially been designated #2's, I'd say this is a low point in their careers. I hear they need a back up in Green Bay, were they treat quarterbacks great!
Posted by Lynchy at Friday, August 22, 2008