My brother and best critic of LynchyRightNow.Com recently commented on my columns being to 'bias' toward the east coast and specifically Boston sports. My response was this, CAN YOU BLAME ME? Three months ago the sports world was focused on New England; The Red Sox coming off a second World Championship since 2003, the Boston Celtics were running roughshod over the NBA and the New England Patriots were approaching the greatest season in NFL history, ahhh wasn't it good to live in the epicenter. Then came the Super Bowl, the Pats coughed up a shot at history, pitchers and catchers hadn't began to report, and the dog days of the NBA were ahead of us, the media adjusted and moved out of Beantown. Well I'll say it, WELCOME BACK!

This time there is a new component to the domination of professional sports in Boston, the black & gold of the Boston Bruins. Yes, I know you forgot that they played professional hockey in Boston but they do and pretty well I might add. Now that the Bruins have received coronation from ESPN's only remaining NHL analyst, Barry Melrose, it is official I will be upset if the Bruins lose game seven of their first round playoff series against the Canadians. While were talking about Melrose, he's got the best job on the planet, Barry could completely make up the things he says and his employer wouldn't know the difference or care for that matter. I'm going to utter something I never thought I would, ESPN should reconsider allowing playoff hockey on the world wide leader and if they don't go for that at least let Melrose announce a first round NIT game or something:

"I don't know what this here sport is called EH but they are shooting an object into a net EH so I'm getting into it, EH"

Back to the B's, not only have I been following this entire series but I'm impressed at a number of things here; the Bruins & Canadians fans are absolutely out of control and I love every minute of it, the Bruins head coach, Claude Julien, looks eerily similar to former pro wrestling legend George "The Animal" Steel, and there isn't a player in any sport who looks scarier than Bruins defensemen Zdeno Chara, 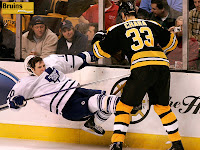 the man is 6'9 and on skates is 12 feet tall. I'm getting alot out of this playoff series (besides the fact that I need to get something called NESN plus, this way I can watch both Sox and Bruins game when their start times cross path) normally I would be writing like a blockhead about how I love fights, can't see the puck, and have no idea why the whistle is ever blown but now I'm writing about how netminder Tim Thomas isn't just from the same town (Flint, MI) as Michigan State legend Mateen Cleaves but has kept the Bruins in the series especially when he allowed just 1 goal in game 5. It took Claude Julien 3 games to play Bruins young center Phil Kessel but since Kessel has come to play with 3 goals and an assist and in my novice mind will be the guy who decides the series. If you haven't been watching playoff hockey since . . ever, then you should start and I'll finish this with three specific reasons:

1. If you love college sports because of the fans and the atmosphere then hockey is for you. Not only are the fans nuts and to put it bluntly, crazy, but they actually play a role in letting everyone at home know when a goal is scored or a puck is saved, without them you'd spend half the game confused.

2. If you loved the Golden State Warriors knocking off the Dallas Mavericks in the first round of the NBA playoffs in 2007 then this Bruins v. Habs series is for you. The Boston Bruins may be one of the most storied franchises in professional hockey but in 2008 they are the eighth seed on the verge of knocking off the top seed on the road.

3. The NHL eastern conference playoffs doesn't include Mickey Mouse. Franchises like the Hurricanes, Lighting, Thrashers, and Panthers are at home watching the quest for the cup while the Flyers, Rangers, Capitals, Bruins, and Canadiens will see who takes home Lord Stanley.

Game 7 Bruins @ Montreal 7:00p.m. Eastern Standard (Not to worry, It's marathon monday so the Sox will have already wrapped up)

. . . . Call me bias, the Celtics are the favorites to win the NBA Title, the Red Sox wrapped up the Indians this week and took 3 of the first 5 from the Yankees, the Patriots are prepared to draft in the top 10 a season after they went to the Super Bowl, the Boston College Eagles just won the NCAA Hockey National Championship, it isn't a bias it is just WHAT IT IS.
Posted by Lynchy at Sunday, April 20, 2008