This is the inaugural LynchyRightNow BASEBALL preview, I'm as excited as Client #9 on a Saturday night at Scores. I've injected myself with growth hormone but if you ask me in a year I will most likely tell you I've misremembered that, and TO THE PREVIEW we go:

Not only was Sports Illustrated's Baseball Preview my favorite preview in past years (check it out, on newsstands everywhere) but it showcased some of the greatest young talent in the game. From Brewers Slugger Ryan Braum to Red Sox phenom Clay D. Buchholz, SI documented each of the games bright stars and how they will impact baseball in 2008. Here are my young guns:

Kosuke Fukudome, okay so facing Eric Gagne in a game closing situation may not be as tough as it it once was, but slamming a 3-run game tying blast over the vines sure was validating to the legions of Cubs faithful. Placed in a lineup that includes Aramis Ramirez, Alfonso Soriano, and Derrek Lee might just be the situation best fit to acclimate him into the majors. The 32-year old rookie has 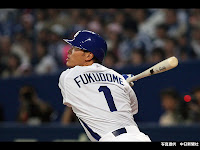 participated on two Olympic medal winning teams while in Japan and also a participant of the 06' World Baseball Classic with fellow Japanese star and current Red Sox ace, Daisuke Matsuzaka. In his last full season (2006) in the Nippon Professional League in Japan, Fukudome hit an astounding .351, with 31 homers and 104 RBI's. Since 2002 the newest Cub has hit over .300 in 4 of 6 seasons, the two he didn't hit .300 or better in, he played less than 100 games in, most likely injury plagued seasons. Most interesting thing I found out about Fukudome was that not one but SEVEN teams drafted him in the 1995 first round of their professional draft (confirmed by Wikipedia), now I have ABSOLUTELY NO IDEA HOW THAT HAPPENS but I'm assuming it is pretty impressive, just imagine if you could do that in the States:

That would be how the picks go in the MLB draft if every team could draft the same player. MAN, I LOVE JAPAN!

Troy Tulowitzki, BAM! That is how he burst onto the scene last year and that is how he is bursting onto my baseball preview. The Santa Clara shortstop hit .291 last year in his first full season with the big league Rockies. Tolowitzki started in all but 10 games in 2007 for Colorado and was instrumental in the Rockies postseason run toward the Fall Classic. With Troy playing in a lineup surrounded by young, extremely good talent in, Matt Holliday, Brad Hawpe, and Ryan Spilborghs who hit .299 in 97 games last year, he'll be able to see good pitches and develop into a nice young star. Expect Tulowitzki to have an all-star caliber spring and finish the season strong.

Brace yourself for the arrival of King Felix Hernandez, Seattle's rising star finished 07' with just 14 wins and has spent considerable time on the DL each of the last two seasons. With that said, he has pitched in at least 30 starts in 06' and 07', the Mariners, having significantly upgraded their pitching staff with the addition of Eric Bedard, Felix should have some help this year. In his fourth year Hernandez is only 22 years old has struck out 165+ in two out of his first three years and that rookie year he struck out 77 in just 12 games. In Felix's two starts against the Red Sox last year he struck out 11 batters in 14 innings and hitters hit a mere .226, against the Yankees they hit .208, and Cleveland hit just .276. (that was a playoff prediction teaser) With Johan now in the National League, expect Felix to takeover the American League

This next one goes out to my buddy Nelson, Brewers slugger, Ryan Braun. Braun's numbers in his first season in the big leagues are so insane that they needed to added verbs:

He only played in 113 games, NUFF SAID. A fantasy geeks' dream, Braun is a threat on the base path and can go yard at anytime, the ultimate 5-tool baseball player. What has Braun done against National League Playoff teams? Against Philly Braun hits an astounding .429, against Chicago .395, and against Colorado .368, impressed yet? The one-two punch of Ryan Braun and Prince Fielder slugged a combined 84 homers in 2007 and are poised to do it again, watch for the Brewers duo to mash all year long.

Finally Johnny Cueto, the Cincinnati Reds 21 year old phenom was lights OUT last night in his big league debut. Unfortunately it was in Cincinnati and raining in April so there was all of about 29 fans in attendance. LUCKILY we have Peter Gammons and a little thing in Connecticut called ESPN. Cueto finished his 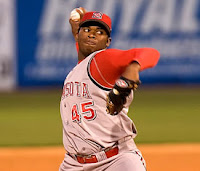 first game allowing just 1 hit (a homerun) over seven innings and fanning 10 batters against the Arizona Diamondbacks to boot. The baseball jesus, Peter Gammons, would have told you several weeks ago that new Reds manager Dusty Baker is more than excited about the young righty, there had to be something to get him out of Bristol into the managerial trap known as Cincinnati right? In four Triple A starts last year, Cueto finished 2-1 with a 2.05 ERA and 21 strikeouts. You want to know why I love Cueto most? Because he played with former CENTRAL MASSACHUSETTS STANDOUT, Rick Asadoorian, on the same staff for the double A Chattanooga affiliate of the Reds. Cueto was a strikeout animal sitting down 77 strikeouts in 10 starts going 6-3 with an ERA SLIGHTLY over 3.00, more impressed? Try only 11 walks in 10 starts. He'll have a great season, then need Tommy John by the time he is 24.

Who doesn't love to hear the chant "O-O-V-V-E-E-R-Rated" ? I am beginning to make my season long attack on the Detroit Tigers and New York Mets, both of whom I not only HOPE miss the playoffs but WILL miss the postseason.

First off the table, welcome to the D, home of the worst bullpen of all the American League contenders. I want you all to know that I've been saying this for months and this has nothing to do with the fact that they just got swept by the Kansas City Royals, that's right, the Kansas City Royals. How jacked up about the 44 year old Kenny Rogers are you? This isn't your fathers Kenny Rogers who was starting All-Star games and throwing cameramen down stairs. Maybe you want some Dontrelle Willis, do you realize what the American League lineups do to pitchers from the National League? Somehow Willis' 10-15 record with an era of 5.17 and 131 runs 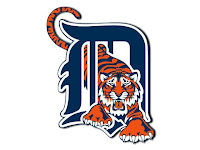 allowed, IN THE NATIONAL LEAGUE, doesn't exactly translate well for the D-Train. BUT they still have Jeremy Bonderman right? HAHAHAHAHAHAH PLEASE 5.01, that is his ERA, I'm not exactly banking on him to bolster the rotation. Nate Robertston is still in the Tiger rotation, along with his 9-13 record and 1 season with an ERA under 4.00 in his 4 years as a starter with Detroit. I'll give you Verlander he is just FILTHY, but so is Scott Kazmir and the Rays aren't going anywhere, so is Roy Halladay and the Jays aren't winning a ring, and so is Joe Blanton and the A's aren't winning a ring either. To that faithful bullpen, I LOVE MY CLOSERS TO HAVE AN ERA of 4.38!!!!! Todd Jones will have to carry the Tiger pen until Rodney and Zumaya come of the DL, good luck Leyland. I know they have a terrific line up, but you know what terrific lineups get you? SQUAT, scoring 1,000 runs doesn't do much when your entire staff could have ERA over 4.30, with the exception of Verlander. I don't think they can beat Cleveland who has a slightly less powerful lineup with much better starting pitching depth, not to mention a better pen.

The second most obnoxious fans in New York City, the Met fans, won't be so happy to hear this. YOUR NOT GETTING IN THE PLAYOFFS. In one year somehow, Pedro Martinez went from being a guy who couldn't make a start until August, to making Met fans believe he is the definative #2 starter on their roster. Since leaving the Red Sox, Pedro has spent as much time on the disabled list as Eliot Spitzer spent at the Mayflower. IS ANYONE SURPRISED THAT HE IS ON THE DL? Now you are banking on starts from John Maine, really, JOHN MAINE? and Oliver Perez? This is the odds on favorite

to win the National League? Explain to me how Arizona who reaches the National League championship series, then goes out and adds one of the top 5 starters in the American League to their rotation in Danny Haren, yet they aren't THE favorite? Shall we discuss their collapse at the end of last season? They did add the BEST pitcher in the American League in Johan Santana, but at best he pitches 40 starts, say he breaks all records and gets 30 wins in his starts, where are you getting the other 60 from? Wagner is another year older, Delgado is still your first basemen and the Mets are still playing in the National League East with the Phillies who most likely aren't going to spot the Mets another 7 game lead with a month go in the season. The Cubs, Brewers, Diamondbacks, Dodgers, Rockies, and Braves could all make the playoffs, someone from the East won't be getting in. Don't worry though, I'm sure Pedro could give you some quality starts . . . . in September?

The trade deadline is one of the most exciting times of the year, this season it will be a tad different. The Seattle Mariners won't be trading to get what they need though, they'll be signing the best available free agent:

Enter 7x MVP, Barry Lamar Bonds. Barry's move to the American League should have happened three to four years ago, allowing the San Francisco Giants to evaluate BEFORE committing major dollars to Barry Zito, AND when having 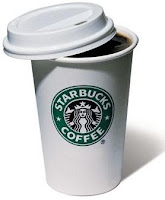 Bonds added to your roster wasn't the circus it will be, come July. Ask yourself these questions; What hitter in the past twenty years affected the game more than Barry? What hitter determined the way pitchers pitched to him more? Lastly, picture this scenario . . . runner on second, no outs, bottom of the ninth, tie ball game, Are you that confident that pitching to Bonds is SO EASY now? The Seattle Mariners 4th outfielder is none other than Charlton Jimerson and their DH is Jose Vidro (who has hit a grand total of 21 homeruns over the last 4 seasons). Barry missed 40 games last year and still had 28 homeruns. What city would be more accepting of Barry than Seattle? Starbucks, Kurt Cobain, and Fish that is what Seattle knows you don't think they'd welcome Bonds? BONDS TO THE M's . . .I LIKE IT.