As you already know the Houston Rockets lost two nights ago for the first time since January 27th. 22 consecutive wins from January 29th to March 18th, including the last 10 victories without injured All-Star center Yao Ming. In a calender year where the NFL's New England Patriots and PGA Tours Tiger Woods have experienced similar winning streaks, the Houston Rockets most recent accomplishment doesn't hold a candle to those. "Clutch City" quite frankly, I'm just unimpressed.

22 Wins and only 10 against teams with a .500 or better record. Two of those ten against New Orleans, the same team who proceeded to dispatch of the Rockets by 21 points last night. Houston managed to beat Dallas & the Lakers during their streak, both teams missing all stars in Dirk Nowitzki and Pau Gasol. One victory against the Denver Nuggets, who are most likely going to miss the playoffs and have given up 100+ points in 8 of their last 10 games. The remaining five wins are against future Eastern Conference runner-up Cleveland (2), the Washington Wizards who are currently one game over .500 and have a 14-18 record on the road (they played in Houston), the Portland Trailblazers and lastly against the Golden State Warriors on January 29th to start the streak, I'll give em' those two. Still impressed? I'm not. 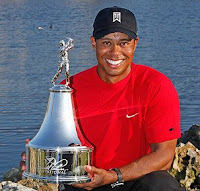 stick to PGA events, in case you don't know what went on in Dubai earlier this year. In his first three tour events of 2008, Eldrick has gone MJ on the field, three straight #1 finishes and $3,300,000 in winnings. Let me reiterate that, $3,300,000 in winnings, that's for a total of like 12 days of work. Alot has been made of Tiger reaching his 64th career win last weekend, and rightfully so, he did it 14 years sooner than golf legend Ben Hogan. The PGA Tour website documents a Hogan v. Tiger comparison in which they inflate Hogan's career winnings of $332,517 to an estimated $3.2 Mil, that would be an estimated $77 million less than Woods. Yet baseball players are overpaid? If you think Woods is getting bored just watch his highlights on 18 last week, after kindly letting my mailman, Bart Bryant onto Sunday afternoon television Tiger dispatched of him emphatically. Is Tiger lacking competition? I don't think so, could he be just that much better? A tad more impressed by the feats of Eldrick "Tiger" Woods.

So Houston, congratulations on 22 straight wins, you'll be soundly defeated within the first two rounds of the playoffs. Clutch that.
Posted by Lynchy at Wednesday, March 19, 2008