First and certainly foremost, Happy St. Patrick's Day to all my readers. What a lucky day, we celebrate my favorite holiday and one of my top 5 favorite days of the year, the day AFTER selection Sunday. For all of you who don't know about selection Sunday, I cannot help you, your life is sad.

After a bunch of old white guys, primarily athletic directors & program officials, sat around and discussed who they want IN the tourney, and who they want OUT of the tourney, we are left with a field of 65 teams, bound on a journey of college hoops to determine who the best team in the land is, or at least the best team over the next 3 weeks. Tell your bosses and wives you will be utterly useless during the remainder of the month and not even the resurrection of Jesus Christ will stand in your way.

I don't know what it is about those brackets but next to sex and occasionally hitting the links, most men would agree filling out brackets is a top 3 GUY thing to do, what can I say, we live a sad existence. I have about 1,345,098 things to say about the 2008 NCAA Men's College Basketball Tournament, unfortunately my polling says readers fall off at about the 8th thing so were going to try and limit it to five, sorry I do understand that work gets in the way of your enjoyment of my blog.

5. Call it what you will, but I'm calling it what it is. A HEIST. For the last few weeks I have had it in for the University of North Carolina, and last night didn't help that at all. Hansbrough may be the consensus national player of the year, but I disagree, entirely. I'd rather have the 3rd best scorer and #1 rebounder in the country, Kansas State super freshman, Mike Beasley. Roy Williams

isn't the best coach in the country, and in my cell phone of college coaches, he isn't even in my "Five" these guys are, Izzo, Donovan, Self, Howland, and Krzyzewski. From Dicky V to the tournament selection committee, the HEIST is in. North Carolina is being ushered to the elite 8, all while never leaving their home state. No one would disagree, that in the 2007-2008 regular season the ACC as a conference was less than impressive. Maryland, Wake Forest, NC State, and Georgia Tech all had lackluster seasons, the result you ask? 4 ACC Teams head toward the dance. I'm sorry but non-conference victories against Davidson, BYU, and Kentucky, yes that would be 18-12 Kentucky, aren't exactly mind blowing. My heels don't have tar on em'.

4. Arizona State has nothing on Paul McCartney. I understand that the Sun Devils and their faithful feel like they just got jobbed by not making the NCAA tournament. They probably could have won 1 or 2 games in the tourney but who 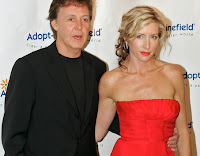 cares besides their fans? From November 19th to January 3rd the Arizona State Sun Devils played one team who is in the tournament, a double-digit victory over Xavier is something to hang your hat on but sandwiching them in between cream puffs doesn't exactly make me think you were done in here. They were the model of inconsistency throughout the last two months of the season: 5-10 in their last 15 games? Arizona may have lost to their counterparts twice but in that same stretch of games finished 8-8. The wildcats also risked their chances by going on the road at Kansas and at Memphis, last time I checked those were 2 of the top 4 teams in the land. When the Devil Rays beat the Yankees 2 out of 3 this spring, whose putting money on the Rays making the playoffs over the Yankees? Enough crying Arizona State fans, you could be Paul McCartney, who is out 48.6 million dollars after losing his divorce settlement to his ex-wife, on St. Patrick's Day to boot, those Brits really must hate the Irish.

3. Bob Knight is owning ESPN. Don't get me wrong I love Jay Bilas, Dicky V, and Hubert Davis but The General has officially taken over in Bristol. NO ONE does what they want more in life than Robert Knight, I'm reminded of the scene in Good Fellas when Ray Liotta is reciting to the audience what happens when Paulie takes over the night club:

My bet is that they made the new intern go over the dress code with Bobby before the first interview. Not a job I'd want to have. While all the other experts are taking the usual suspects to win the tourney, North Carolina, Kansas, UCLA, Bob Knight

predicts that Pitt, yes 6-1 in the month March including the Big East tournament championship on Saturday night over Georgetown, Pitt to win the entire dance. When Digger Phelps asked Knight to admit that he was now part of the media, Knight was about to shove Phelps' tie & highlighter matching combo somewhere special. By far the most intriguing analyst I've ever heard from, when asked a question from an e-mailer out of South Bend, Indiana last night, the former Texas Tech head coach replied:

"Steve, out of South Bend, you probably don't know much about anything"

HAHAHAHAHAHAHAHAHA, how does it feel Steve, you've just been verbally beat down by Bob Knight on selection Sunday. Tune in for the rest of the month to The General on ESPN, it is PRICELESS.

2. I mentioned this several blogs back but now with the tournament set to tip-off, why does Memphis get so little respect? Conference USA is an extremely weak conference to play in for a team of Memphis' caliber but what is the ONE thing we ask of teams that play in a Conference such as that? SCHEDULE A TOUGH OUT OF CONFERENCE SCHEDULE:

That is a short list of the 8 of their out of conference wins, notice anything about those schools? THEY ARE ALL IN THE TOURNEY. Two teams from the BIG EAST, two teams from the PAC-10, and one team from the Big-12. Yet somehow the victories against Duke

& Clemson are superior for the case of North Carolina being the #1 overall seed? This isn't like college football where Ohio State schedules my local high school as their first home game of the year then expects to be in the National Championship. You may be saying to yourself, why does he care? Why is it so important that Memphis be recognized as the #1 seed overall? The NCAA does everything that it can to ensure that national powerhouses who have hoards of fans end up in the final four, I.E. North Carolina. In the case of Memphis if they run the table and end up in the elite 8 they will be playing the number #2 in their region, Texas, for a shot at the final four . . . . THE GAME WILL BE IN HOUSTON, TX. Now explain to be how little Memphis ends up with Longhorn fans all over their back trying to earn a trip to the Final Four while North Carolina sits in Raleigh and watches the sea of Carolina blue flow into the stadium? I'm on the Memphis bandwagon, officially. Go Tigers!!!!

1. Power Conferences get ready to play head-on. I disagree with the idea that is being floated out their in many circles that this year is a "down" year for the game of college basketball. Because of the parody in the conferences we are left with teams from each of the "Big 6" conferences squaring off in the first round of tourney play.

By the end of the day 7 schools from major conferences will have already been bounced from the tournament. I'm always interested in the debate about which conferences are superior to others and on the first weekend of the tournament we'll have an answer for the debate. The Big East teams have games against the Pac 10, SEC, and ACC, who would say that if they run the table in those three games it isn't a feather in the caps of teams like Syracuse? Who sit on the bubble and say why aren't we in when we play who we play night in and night out. The most intriguing conference tournament by far and then to put half of their conference into the tourney is a remarkable accomplishment. No matter what, on the first weekend of the tourney we get to see possibly the future of the NBA play each other with Michael Beasley & K-State squaring off against O.J. Mayo & USC in the Midwest Region.