For the next two months your going to hear this argument again and again, who is the 2007-2008 NBA MVP? Last week Kobe Bryant had the edge coming off monster games against Dallas and Sacramento. This week however, King James dropped 50 on the Knicks at the Garden. I ask again, who is the league MVP?

All due respect to Chris Paul, not this year my friend. Along with Kevin Garnett, who has single handily turned around the most storied franchise in NBA history, Paul receives honorable mention for carrying the city of Nawlins' and their hoops team. By years end we will have passed the torch from Steve Nash to Chris Paul and we'll be referring to him as the gold standard of point guards. Mr. Garnett will take advantage of the Eastern Conference home court advantage and lead Boston back from the depths, that was dramatic, I got chills.

Whether Lebron teams up with Jay-Z or not, he is one of the greatest talents this league has ever seen. Hard to imagine that with all the hype surrounding him as a high schooler, his games being viewed on national television, his school receiving endorsement deals, and being saddled with the future of basketball in the state of Ohio, anyone could handle that with the style and grace that James has. We seem to forget that before being dispatched by the greatest sports 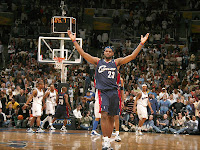 dynasty of the last 10 years in the finals last season, Lebron led a cast of scrubs to the main event. Will you remember that Daniel Gibson was the point guard of that team or will you think he is your mailman? What is even more unfathomable than that is how Lebron has followed up his heroic efforts last year with his accomplishments this year, his video game stats of 30 ppg, 8 boards, and 7 assists every night out is in a word, RIDICULOUS. Completely overhauling a playoff team in the middle of the season for a declining defensive player with no offensive game, two shooters who are at best "quality," and a second tier NBA point guard would force some to "find their way" for a couple of weeks, not Lebron who has gone for 34 points a night since the overhaul. I firmly believe Lebron could be entering "Shaq" league, in which you could place him on any team, at least in the Eastern Conference, and they'd be an immediate contender to win the East. The things you may not have heard about, if you were living in a cave or busy watching American Idol, Lebron not only told Knick fans that he would score 50 on them, he went out and did it. Twice this season, that we know about, Lebron has told fans in the crowd that it was their fault he went into another stratosphere against their teams and exploded for dominating fourth quarters to winning efforts, what does that prove? He is toying with the competition. Be prepared, this is Lebrons world and we are probably just paying rent.

One person who isn't paying rent however, he owns it outright, is Kobe "Bean" Bryant. The best all around basketball player on the planet is having a career year and he is playing injured. Bryant's 28 points a night may not be as high as Lebron but it is just as explosive. The western conference is as strong as it has ever been in league history and Kobe is still dropping 25-30 points

a night, completely devastating teams in the waning minutes of the game. While not as big and physically dominating as Lebron, Kobe is a stronger defensive player and if you could calculate clutch play, I'd give the edge to him as well. I don't think you can use negative opinions on the Eastern Conference as a discredit to what Lebron is doing, but at the same note what Kobe is doing in a tougher conference night in night out is more impressive. My belief is that, should Kobe and the Lakers finish the regular season with the best record in the West he is a hands down favorite for MVP. Here is why I am settling the debate and choosing Kobe Bryant, this isn't like Karl Malone getting the MVP during the "Jordan Years," Kobe is deserving and I'm sure by the time he retires Lebron will win an MVP but with Kobe in the West and playing the way the Lakers are, he gets my imaginary vote.