Saturday afternoon my father, uncle, and I showed up at Conte Forum just minutes befor tip-off between #2 ranked North Carolina and unranked 13-14 Boston College. After watching the Eagles lose 12 of their last 15 games I was fully expecting to see the mighty Roy Williams and his Tar Heels blow out Boston College, somewhere in the neighborhood of a 20-30 point differential. This fortunately would be my first time getting to see the boys from tobacco road play up here, and I was in for quite a shock.

I used to be a fan of UNC, simply because I hate Duke and who do you cheer for when they play each other right? NOT ANYMORE. Here are the points of the game, Boston College ended up losing by 10 after they held an 18 point lead early in the second half, BC point guard Tyrese Rice lead all scorers with 46 (34 in the first half) and put on a shooting clinic that I've never witnessed before, and the ACC officials wanted nothing more than to see the heels win. Do I sound disgruntled yet? GOOD.

When I attend or watch basketball games I always witness a different style of officiating. In high school hoops, the refs are 40 to 50 pounds overweight, love their part-time job, and still are trying to be a main part of the game by completely overreacting when they call a charging call, which they do 7 or 8 times a game, its sad I feel for their wives. In collegiate athletics the refs LOVE the standard practice of "the make-up call" which is when they completely botch a play by calling a foul and then proceed to call the next hand check down the court in order to appease the fans who are on top of them ready to kill. The pros have their own set of rules, which most recently included gambling on the games they ref then determining the point spread by getting guys in foul trouble. Okay, so that last one is a little worse than it sounds, no?

Saturday afternoon however I have never been more pissed off after leaving a sporting event IN MY LIFE. The previously mentioned and ripped ACC officials called phantom call, after phantom call, to put UNC star forward Tyler Hansbrough at the charity stripe. It was disgusting. Now I know what your going to say, this guy is just sour grapes, but your wrong. Tyrese Rice who isn't an inch over 6 ft tall but listed as 6'1 dropped 8 of 12 three pointers on UNC and the rest of his points came from his standard drive to the basket where he would get hammered by a bigger, more physical 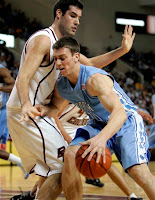 team and laid out on the floor, he shot 11 free-throws. At nearly A FOOT taller and 250 pounds however, Tyler Hansbrough goes to the line to shoot 14-free throws. In six of his last eight games played, ALL ACC CONTESTS, Hansbrough has been awarded with at least 12 trips a game to the free throw line. That stretch includes the last four games where he went to the line 14 times twice, 12 times once, and 13 times another game, HOW is that possible? Jamie Luckie, Gary Maxwell, and Roger Ayers should be ashamed to associate with other zebras today, because that game was ridiculous and I'm disgusted. Yes, Boston College had their chances and missed some shots that would have put them in position to win, but there isn't a bit of doubt in my mind that Hansbrough would have gone to the free throw line 10 more times in the last four minutes had the game been closer.

BUT THAT ISN'T ALL I LEARNED, OH NO. Not only are officials biased toward North Carolina because of their mystique but fans are just as bad, up until yesterday I WAS ONE OF THEM. Friday night during the Celtics v. Bobcats game, UNC head coach, Roy Williams sat in the stands watching some of his former college players play in the pros, very proud he probably was. Ray Felton and Paul Pierce both standouts, both learned under his tutelage, I said to myself "self, what a good coach and quality guy Roy is." Today, I want to kick my own a** for saying and thinking those sentiments about Ole' Roy Williams. I don't care about his hundreds of wins, hall of fame status, or National Championship, Roy Williams is a grown man who acts like a child on the sideline, and should be ashamed of himself. As I mentioned, yesterday afternoon was the first time I'd seen Roy coach in person, yes he shook hands and congratulated Rice on a excellent game, that was respectable, but for the 40 minutes prior

he jumped up and down on the sideline like a complete idiot. At times during the contest Roy would ride the refs the whole time the ball was down his end of the floor, he wouldn't even be watching the game just waiting for the ref to verbally assault him. I watched him all over the refs after his team just knocked down a shot on a perfectly ran offensive play because he wanted an "and one call" as if they weren't already getting all the calls. A BC player sprinted back on a fast break and stripped his player to force a jump ball and Williams ran from one end of the bench to the other and jumped up and down, literally, until the sideline ref reversed the call. How do you tell your players to cool down in a stressful situation if you react the way you do? How do you teach young boys to be men when you act like a little boy yourself on the sideline? Someone give Roy a towel for his tears, they are getting all over the court.
Posted by Lynchy at Sunday, March 02, 2008